Charles River “Conservancy” Glories in Magnificent Grove it is fighting to Destroy?

How low can these people go?

Key factors in the destruction on the Charles River and the Cambridge, MA area in general are the destructive groups' lying about which side the groups are on.

This way they con people into destroying what their victims cherish. The “Friends of the Alewife Reservation” destroyed a key part of the Alewife reservation using this con. And they may yet destroy it all.

Below is another photograph taken from the Charles River “Conservancy”’s facebook page. 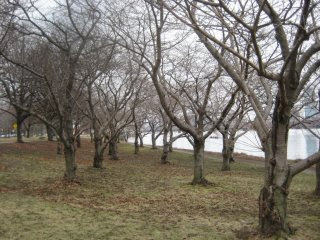 The Charles River “Conservancy” is fighting for the destruction of hundreds of trees on the Cambridge side of the Charles River between Magazine Beach and the Longfellow Bridge.

One of the vilest goals of this really destructive organization is the destruction of a magnificent grove of about 104 trees at the Memorial Drive split perhaps half a mile from the Ghetto in which they have confined the beautiful Charles River White Geese. The ghetto where almost all ground vegetation has been destroyed since this falsely name group started environmental destruction for the Department of Conservation and Recreation.

This photo strongly looks like the excellent grove at the Memorial Drive splint these rotten people are fighting to destroy.

And they are lying that they cherish this magnificent grove to con good people into doing the terrible deeds of the Charles River “Conservancy.”

This photograph is reproduced without permission under the fair use doctrine.

PS: I have looked at the comments and related pictures. This is most definitely the grove at the Memorial Drive split they are fighting to destroy.

Business as usual with the fake groups conning people in the City of Cambridge, MA, with its destructive, routinely lying government.
Posted by Friends of the White Geese at 7:14 AM