I have been doing a series on possible new rapid transit service for the Boston 2024 Olympics.  A major part of my interest is my appreciation that they want to destroy the starvation wall Cambridge and friends have created at Magazine Beach as part of their heartless abuse of the 34 year resident gaggle of the Charles River White Geese. 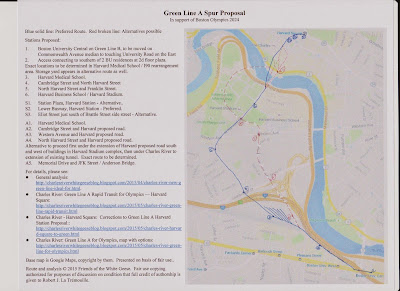 This is one of three suggestions for the Harvard Station stop.  My preferred alternative is S2, the lower busway.

Here are shots of the station at ground level taken from above the S2 / lower busway alternative.

In the first photo, the building at the far left is a Harvard University building physically located in Harvard Yard, separated from Harvard Square proper (which is what we are viewing) by an ornate fence.  The building to the left is "Out of Town News", a newspaper stand in business for many years.  In the very middle of the shot is an information booth.  To its right with red and white stripes extending at the top, is the entrance to Harvard Station.  Blocking the view of the entrance, colored blue, red and blue, is the structure holding the elevator to the station. 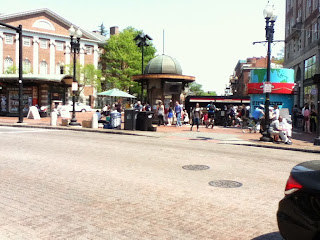 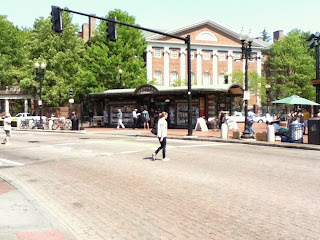 Here is the open plaza between / behind Out of Town News and the main entrance.  The new elevator would have to be located in this plaza.  A rough guess is that the second photo is at the location. 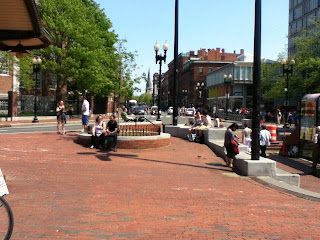 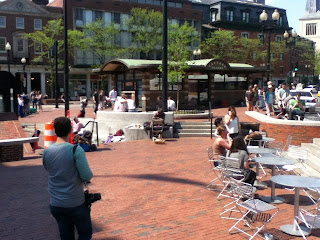 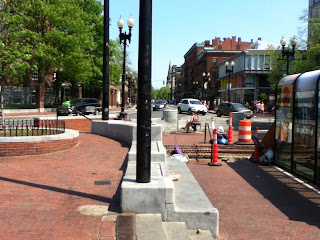 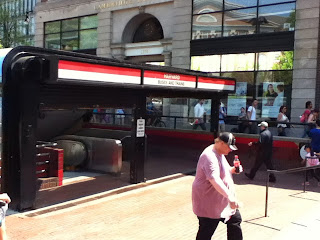 The is the current above ground entrance to the station elevator is to the right of the final shot.  It would have to be moved to make the option work.

Passengers go down a staircase or escalator to this mezzanine where they change direction and go down to the station level plaza.  The windows were designed for pass sales.  That function died out very quickly and is now fully automated.  In order to place the station at the pedestrian plaza level, a donut shop would have to be either moved forward or moved elsewhere.  The mezzanine is used for small businesses which would fit in well with coffee shop uses.

The lowered ceiling in the second photo is the edge of a grand support system which hold up the public streets and plaza above the station pedestrian plaza with minimal visible columns.  The elevator would have to go in the higher ceiling portion.  My guess is that it would be very close to the wall straight ahead where the shop currently is, with the donut shop to the right of the elevator.  The current shop could go under the supports, which would cost it some height, or go down on the main concourse. 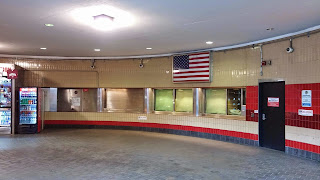 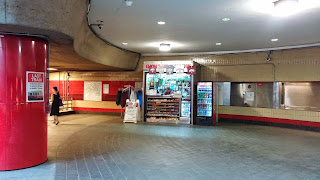 The mezzanine was designed without elevator access.  The relocation would make this area handicap accessible.

Looking from the pedestrian plaza, the support for the public street is at the top of the photo, with the mezannine above the staircase and escalators. The relocated elevator would be located to the left of the left escalator under the mezannine.  This area includes the public restroom, which would have to be relocated, probably against the wall to the left. 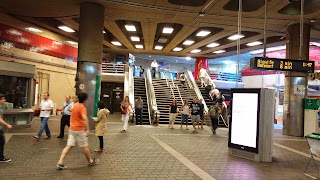 The main level plaza is truly excellent.  35 years after construction it is still excellent.

The view from the mezzanine.  Shows the upper busway straight ahead, with the lights.  Visible below it are automated fare selling machines.  Hidden by the ticket / pass vending machines is the lower busway.  The upper busway has a magnificent back lighted mural which has been hidden almost since the beginning.  The T will not pay for the electricity. 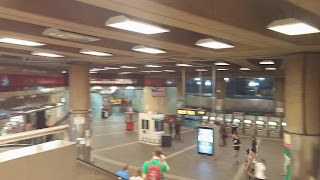 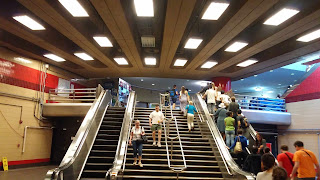 Key to the concept of the entire Green Line spur linking the BU Bridge to Harvard Medical School to Harvard Station is the continued presence of a tunnel connecting the plaza most of the way to JFK Park.  That tunnel, with minimal work could be converted to handle Green Line trains.

My recollection is that the coffee shop was constructed in front of the tunnel.  Moving the coffee shop to the mezzanine or simply forward and to the right would free up the current coffee shop location for a passenger platform.

Toll access could be readily arranged on the left with the platform following the track sufficiently far to the right to grant full access to a three car street car train.

There should be room to go under the mezzanine.  Fare collection machines could easily be stretched across the area to the right of the bottom of the escalator.  Phones to the immediate right could be moved to the wall to the left of the left escalator. 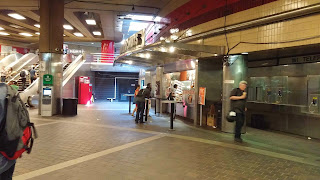 I should think the silver structure to the right is the side of the escalator.  The table to the left is probably about where the fare machines would be.  The train platform would be right where the coffee shop is.  The donut shop is really not very wide.  It would probably fit very nicely on the mezzanine.  If kept here, it could be moved outward and as close to the busway ramp as makes sense.

A wall or some sort of barrier clearly would be needed for fare control.  The big question is just how far would have to be separated to give full access to and from trolley trains. 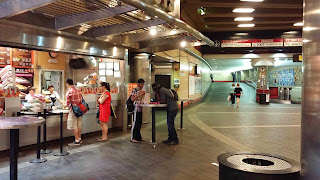 Here is a closer view of the ramps.  The elevator is to the left.  The ramp to the upper busway is straight ahead, and to the lower busway is to the right.

This elevator would be in the middle of the platform.  If it is not moved, access to trains would be awkward, to put it mildly.  The phone bank could clearly be moved to the left of the escalator, which is a third possible location for a relocated coffee shop.  Access to the left would have to be rearranged to keep a public bathroom available. 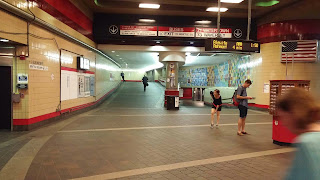 I do not have exact dimensions needed to service the maximum length Green Line trolley.  One factor would be how far to the left you can go.  There seems to be storage or other support facilities under the mezzanine now.

I would think that car access would probably require rearrangement of the ramps.  It is helpful that the left ramp, to the upper busway is wider than the right ramp, to the lower busway.  This difference in dimensions gives the impression that the ramps were designed to allow use of the tunnel for an additional rapid transit line.

I will go into the details of the lower busway use for a terminal in a later report.  There is quite a bit more room there for use, plus, of the three options, the lower busway clearly is, by far, the simplest alternative to create.

There has been limited construction associated with the busways that blocks a portion of the tunnel.  Cleaning up this should not be a major problem.

The much greater ease in use of the lower busway is the reason to prefer it.

Posted by Friends of the White Geese at 3:17 PM