1. MassDOT Meeting on the Mass. Pike.
2. Environmental destructive hypocrites playing both sides of the issue.
3. The Intersection of the River Street Bridge and Memorial Drive.
4. MassDOT’s Brilliant Solution.
5. Recommendation to MassDOT.


1. MassDOT Meeting on the Mass. Pike.

Thursday afternoon, October 29, 2015, I attended a presentation by three entities concerning the rearrangement in the future home of the Harvard Medical School in Allston, Boston, MA, including Mass. Pike (I90) rearrangement..  It was organized by the Massachusetts Department of Transportation (MassDOT).

2. Environmental destructive hypocrites playing both sides of the issue.

I have long been impressed that the some people are involved in the Mass. Pike project yelling “open space,open space, open space” who immediately switch sides when the north side of the Charles is involved:

What has been clear is that they claim to be representing different groups on each side of the river.

In Cambridge, they have their beloved CAMBRIDGE highway lobby and the demanded destruction of hundreds of EXCELLENT trees because the LATEST con out the Department of Conservation and Recreation says that DCR is benefitting THEM by destroying THE SOUTH SIDE, including hundreds of excellent trees and animal habitat.

Pure hypocrisy, and a bunch of vile, frequently lying bureaucrats, and greedy contractors.

On the Boston side of the river, they are lining their own pockets with blind demands for new open space.

And to Heck with the environmental quality, and to Heck with hundreds of excellent trees.  THEY DEMAND DESTRUCTION FOR THEIR GOLD PLATED replacement for a perfectly good existing bike highway.

With their outrageous tree destruction on the south side of the Charles River in Cambridge, they are fighting for air pollution by destroying magnificent, mature trees.

The difference between Cambridge and Boston is that there is extreme environmental irresponsibility in the government of the City of Cambridge, and Boston has a responsible government.

With the blind demands of the hypocrites for open space WHERE THEY LIVE, they are fighting to continue pollution creation on the Boston side of the Charles River with a bad traffic pattern at the River Street Bridge and Soldiers Field Road.

With the blind demands for GOLD PLATING on the south, Cambridge side, they are fighting for air pollution with the totally irresponsible destruction of hundreds of trees

On both sides, they are demanding bad air, doing it piously, and belligerently fighting for their cause of extreme hypocrisy.

3. The Intersection of the River Street Bridge and Memorial Drive.

Here is a now dated map of the project, but the issue is clear. 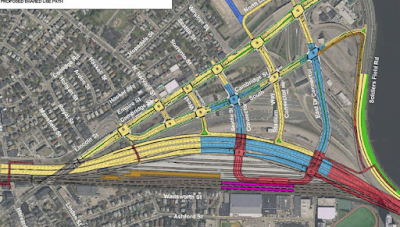 Next to the Mass. Pike project is the River Street Bridge, also controlled by MassDOT.  That bridge is above the map to the right.  It is the extension of Cambridge Street which is the top street, running at an about 45 degree angle.

The off ramp from Soldiers Field Road to the River Street Bridge is a nightmare because the managers are trying to do too much in one intersection.  Until now, they had no choice.

The result is, of course, more pollution from idling cars, and a slower commute for everybody.

The problem is a one way street in two directions.

As you go up the ramp from Soldiers Field Road westbound to the River Street Bridge, you are faced with three possible one way streets, left, center, and right.

The left turn, in a different part of the traffic pattern is one way in the exact opposite direction.

In a different part of the cycle, that left turn becomes prohibited from the ramp.  The one way to Brighton, instead, is one way to Cambridge in the same direction as the right turn off the ramp.  That tiny stretch is an extension of the River Street Bridge.

This is not the Boston based hypocrites’ lovely gold plating with their massive tree destruction and animal abuse on the south side.  This is a silly traffic pattern creating NEEDLESS pollution and delay because that left turn from the off ramp should not be there.

Here is the map again.

Although MassDOT has not apparently thought it through yet, MassDOT has solved the problem at the River Street Bridge.

MassDOT had rejected an off ramp to the Medical School Area from Soldiers Field Road outbound, westbound.  Harvard told MassDOT to try that off ramp.  They did.  Their off ramp suggestion is excellent.  There is plenty of room in the green area to create the off ramp.  One excellent place would be to start the off ramp just above the reddish bike highway.  There is plenty of space for it and connection to the East Drive Connector would be simple.

The off ramp should not loop over the Charles however.  That change was mentioned in private discussion Thursday.   The westbound off ramp from Soldiers Field Road should just go straight ahead and off over Soldiers Field Road.  That off ramp to the Harvard Medical School, properly executed is an excellent idea.  Traffic which now goes to the left, wrong way, at the top of the ramp to the River Street Bridge can now go through the Harvard Medical School area and to their destinations.

That off ramp also greatly reduces traffic on the rotary which includes portions of the two bridges because of the internal connections to the business between the bridges.

And a lot of traffic is reduced.

THIS IS SOLVING A VERY REAL PROBLEM.

Go to it.  Go with that off ramp to the Harvard Medical School directly from Soldiers Field Road westbound, outbound, but not with a loop over the Charles River.

Ignore the loud hypocrites and their demands for blood money.

Do not give the hypocrites their non stop demands.  Treat them as the demanding, destructive hypocrites they are.
Posted by Friends of the White Geese at 11:48 AM