1. What has happened at the Destroyed Nesting Area.
2. Introduction. The machine’s propaganda on how to undo outrageous destruction.
3. The norm on the Charles River Basin, the baby thicket, the outrage resulting, and what passes for an explanation.
A. The norm on the Charles River Basin.
B. The beginning of a new thicket.
C. The future in the Destroyed Nesting Area, a very irresponsible present at Magazine Beach.


1. What has happened at the Destroyed Nesting Area.

The state Department of Conservation and Recreation has replaced the most important area used for nesting by the Charles River White Geese for most of the last 30 plus years with what looks like it will become an impenetrable thicket, useless for nesting.

This action has been taken in blatant violation of common decency, no prior notice, not prior meetings.

This action furthers the state’s very clear policy of killing off all animals residing or visiting the Charles River Basin. That policy, as usual, is buried in secret fine print, false definitions.

2. Introduction. The machine’s propaganda on how to undo outrageous destruction.

Here are a number of pictures to demonstrate the destructiveness of Cambridge, MA and its friends in the state bureaucracy, formally known as the Department of Conservation and Recreation.

I will not keep repeating this, but everything offensive from Magazine Beach / the Destroyed Nesting Area either constitutes the results of actions constituting direct lies or lies of omission. That is, either what you will see is exactly the opposite of what was promised or was kept secret.

I had a very pious and key member of the fake neighborhood association explain to me the Machine’s version of reality with regard to the destruction at Magazine Beach and the BU Bridge area.

The dream is that praising destructive pols for destruction will, through some sort of miracle, cause a situation where destructive people will turn into decent people and undo what should have never have been done.

The policy of killing off animals is buried in the secret definition of “parkland” which is the Department of Conservation and Recreation’s policy for the Charles River Basin. That definition is that no animals need to apply. Resident animals will leave, “voluntarily” or by killing them off.

3. The norm on the Charles River, the baby thicket, the outrage resulting, and what passes for an explanation.

A. The norm on the Charles River Basin. 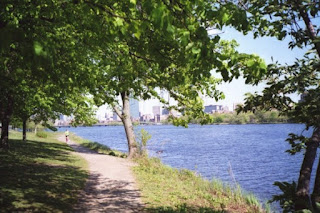 This is the norm on the Charles River Basin.

Native vegetation is destroyed everywhere on the Charles River Basin twice a year by the Department of Conservation and Recreation using the falsely named Charles River Conservancy.

The only exception to the twice annual destruction is at the Magazine Beach playing fields where leaving introduced vegetation to grow can cause more harm than destroying native vegetation.

B. The beginning of a new thicket.

Here are two photos of the work accomplished so far. Remember, this is only the baby introduced, invasive plants.

Invasive is exactly correct, in the coming thicket and the thicket just in its babyhood. These things deliberately harm the resident animals. Harm to resident beings is the key part of the definition of invasive. This is pure, unadulterated, heartless animal abuse. 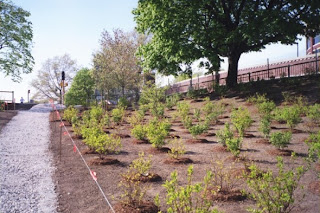 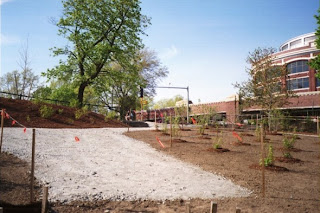 C. The future in the Destroyed Nesting Area, a very irresponsible present at Magazine Beach.

I will follow with extensive photos of the invasive introduced wall walling off Magazine Beach from the Charles River. 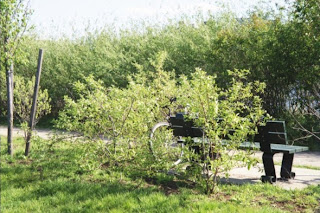 Look again at the first photo. That is how this area looked before the introduction of this bizarre wall.

Now compare the walkways, here and in the first photo versus that which was just created in the Destroyed Nesting Area. In the older walkways the DCR was going through the motions of being responsible. This walkway and the walkway to the east, the surface is light.

At the destroyed nesting area, the DCR is relying on the fake groups in Cambridge. The walkways approach concrete in texture. This is reality and the goal, as well, for Magazine Beach and, clearly, is what the fake groups are fighting for along the extent of the Cambridge side of the Charles River in their highway proposal about which they use the lying euphemism, “underpasses”.

The Charles is on the opposite side of the massive impenetrable thicket. The thicket was installed in phase 1 and is never cut. ALL OTHER BORDERING VEGETATION ON THE CHARLES RIVER BASIN IS CHOPPED DOWN TWICE A YEAR.

If you look carefully above the right end of the park bench, you can see some blue through the thicket. That blue is the Charles River.
Posted by Friends of the White Geese at 6:53 AM