Cambridge killed acres of resident animals when it destroyed acres of the irreplaceable Alewife Reservation.

Cambridge joins the state bureaucrats in their goal of killing off or driving away all resident animals on the Charles in multiple ways.  The most visible victims are the Charles River White Geese, but many, many more victims are not as visible.  Deliberate starvation with a bizarre introduced wall of vegetation on a Charles River where ALL bordering vegetation is destroyed twice a year unless it is starving beautiful, valuable animals.

These extreme examples of holiness are blatant lies to fool people into thinking Cambridge has a responsible city government.

So the outrage on the Cambridge Common is going forward, no trees yet.  The outrages on the Charles River are allowed to stay in place protected by hypocritical company unions.  The Cambridge City Council has its own attacks on the Charles pending on the Grand Junction while designating to the Cambridge Machine the dirty work on the Mass. Pike and in House Bill H4099 destroying hundreds of trees and animal habitat from the Charles River White Geese’s Destroyed Nesting Area at the BU Bridge to the Longfellow Bridge, the second bridge to the east.

And one of their Cambridge Machine Groups is fighting in the Mass. Pike discussions to make things worse in Cambridge.  That one probably tomorrow.

The Cambridge City Council is starving the Charles River White Geese by walling off their feeding place for most of the last 33 years with a bizarre wall of introduced vegetation which they paid for and do not want to know about.  Their coconspirators are joining in multiple attacks on them in their tiny foodless prison for which the Cambridge City Council is working on plans to make worse.

The first is an extended family shot, Grandma Brown Beauty, a child / grandchild, a baby.  The geese are very well organized.  Whenever they have a baby, as much as they can, they have three adults protecting the baby, the parents and a babysitter.  This babysitter is Brown Beauty, the daughter of the assassinated patriarch.  The Cambridge City Council was neutral with maximum guilt.

When the killer of multiple nesting geese and of the leader of the gaggle graduated to rape and murder in the same location, the city council discussed the rape and murder for an hour.  They just did not want to know where their copycat committed the act.

And they are making their outrages worse and worse, while lying of their own holiness. 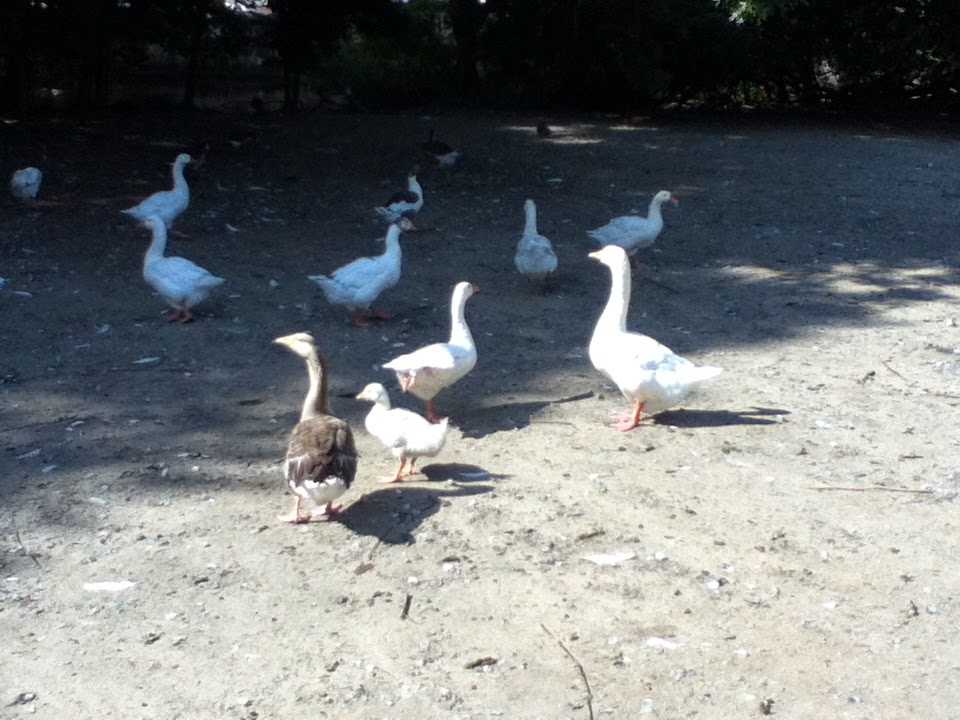 This guy is the other vestigial White Goose with Brown China markings. 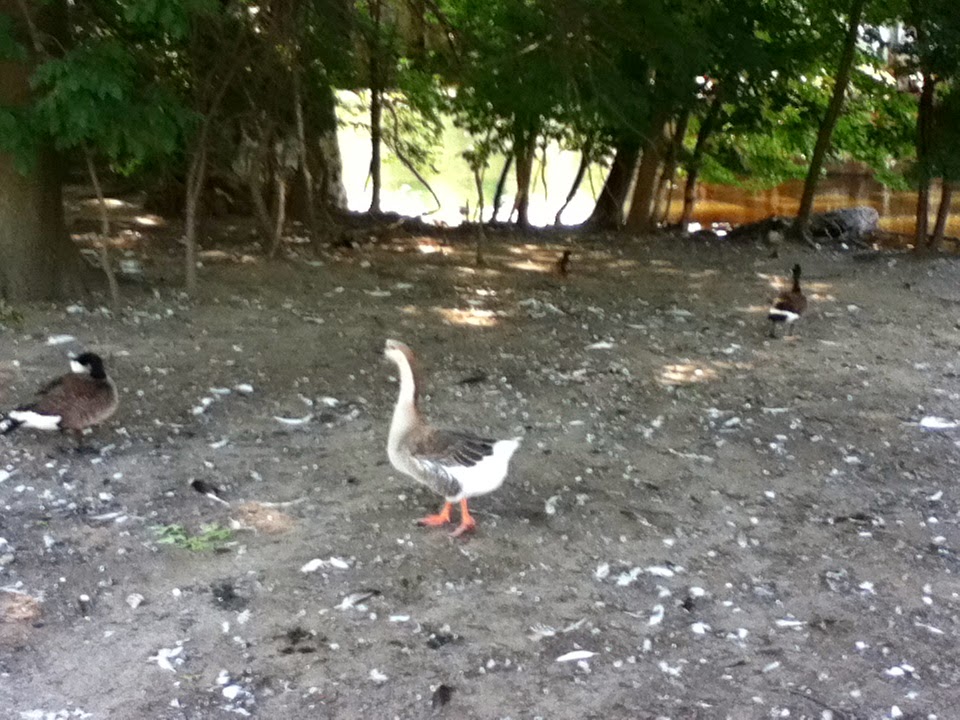 This is one of the offspring, either of Brown Beauty or of the Toulouse who joined the gaggle. 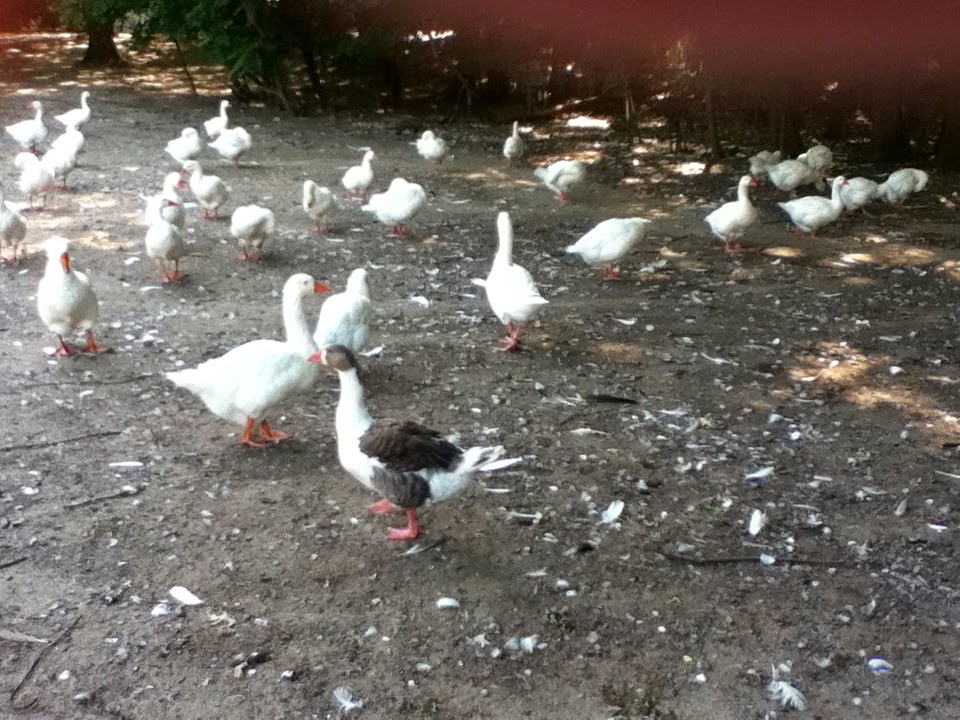 Lovely day for a swim. 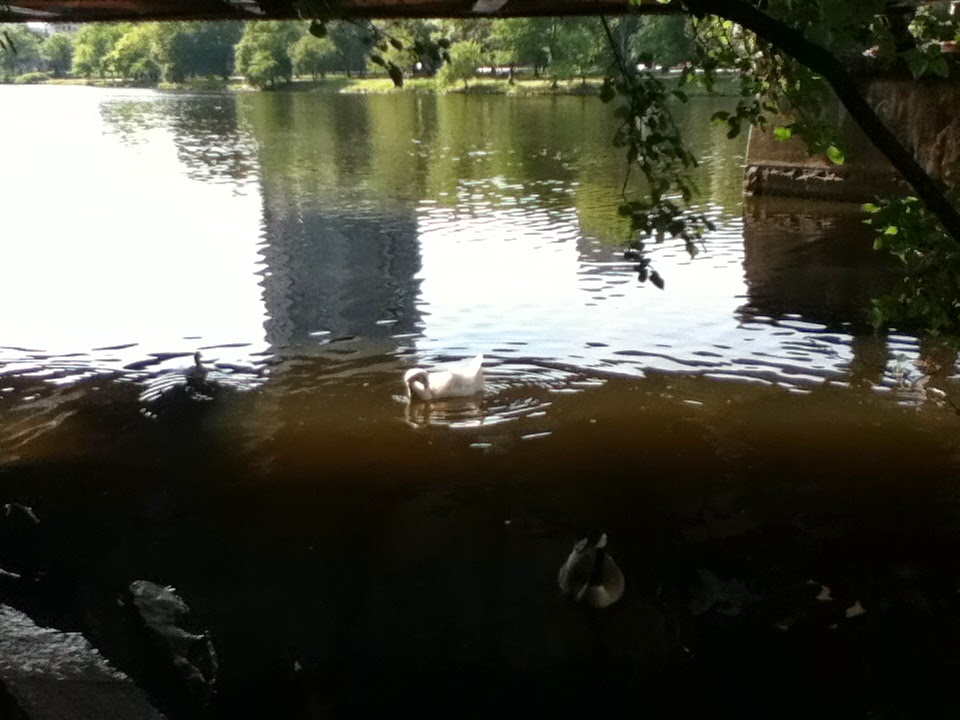 The latest con game, yelling at Circus proprietors (and do not look at the real record of the Cambridge City Council) may be read at:

4. Repeat of response to Cambridge City Council lie that they have no responsibilities on the Charles River.

• City Council has no business on Memorial Drive?

I have been hearing some strange comments that the Cambridge City Council has no business getting involved in Memorial Drive.

• Save the world but don’t talk to us about Cambridge.

Last I heard, the Cambridge City Council has routinely spoken out on matters in South America, Africa, and wherever.  Memorial Drive, by contrast, is in Cambridge, MA, and this destruction was run past the Cambridge Development Department.

The contrast between saving the world and being “neutral” on irresponsible destruction in Cambridge, MA is striking to someone looking for the truth.

Additionally, the Cambridge City Council has blessed the “underpasses” outrage which has been condemned by MassDOT.  This destruction is targeted at the Western Avenue, River Street and Anderson (Harvard Square) Bridges and their environs.

Last I heard, the destructive “underpasses” you have gone on record supporting were located on Memorial Drive.

Additionally, the Cambridge City Council spent between one and two million on the project at Magazine Beach which included destructive work which was either kept secret and which was a flat out lie directly in conflict with public contrary positions.  Portions of your achievement there include a bizarre wall of introduced vegetation walling off Magazine Beach from the Charles River.

The supposedly sacred “Charles River Master Plan” called for a lawn to the river.  It was modified to undo the blatant lie.

You were promised better playing fields.  But you installed sickly grass to replace the healthy responsible grasses there for more than half a century.  You then fed it poisons to keep it alive, and then put in a complicated drainage system to drain off the poisons keeping alive the sickly introduced grasses.  The drainage system decreased the size of playing fields in contrast to the improvements which you were promised.

Your manager of the project repeatedly lied of “no intent” to harm the Charles River White Geese.  You have blocked them from their food of most of the last 33 years at Magazine Beach and have proceeded to starve them.  This does not sound like “no intent” to harm, but I speak English.  Additionally your agent has publicly bragged of starving them.

The fine print of the “Charles River Master Plan” calls for killing off or driving away all resident animals, an achievement you and the DCR did in many acres when you destroyed irreplaceable woods at the Alewife reservation with the assistance of Company Union groups.

My letter of September 19, 2012 to the City Council is attached to my letter on the Grand Junction highway proposal being filed at the same time as this letter.

It includes persuasive photos of the outrage at Magazine Beach in its appendix 3.

Last I heard, Magazine Beach is on Memorial Drive.

• Grand Junction bike highway to be extended beyond common sense.

You recently authorized preparation for funding of a bike highway along the Grand Junction.

The responsible ending for this bike highway would come where the Grand Junction approached the bend in Vassar Street.  There is a tiny distance which would need to be taken through a parking lot there to connect to Vassar Street the distance of one building on either side of Vassar Street to Memorial Drive.

Instead of the responsible ending, the plans you are organizing funding for go beyond this point and cause major destruction in the formerly lush area to which you have confined the Charles River White Geese.  Plus you would install a fence dividing the animal habitat at the railroad tracks, preventing direct access between two areas to which major destruction has been done by your accomplice.

The supposed plans show photographs all over the place but lie through omission by not showing the goose habitat.  Your friends have helped you in the heartless abuse of these beautiful animals by doing very terrible things to the environment in that location already.

Photos of the destruction areas are below and in the appendix.

• False description to you of state plans for the Grand Junction area.

An excellent example of the quality of the staff with which you are working is further information which was suppressed in the 2000s when the City of Cambridge upzoned the area near Putnam Avenue and the railroad tracks.

The staff clearly communicated that, if the Urban Ring subway went forward, a train stop would go there.  Your staff lied by telling you there was only one Urban Ring option.  At the end of this report, I will provide the MBTA plans for both the alternative options in Cambridge.  The one your staff has lied does not exist was adopted as an option in 1991, five years after I first suggested it.  The one which “does not exist” is the likely winner of the two options.

Appendix 1 to the attachment, pages 2, 5, 6 and 7 provide the MBTA’s maps.  The Kenmore Crossing is the one that the Development Department has lied for more than 20 years that it does not exist, and which is now most likely to be the winner.

• Summary on argument which should not exist.

I have no respect for claims that the Cambridge City Council has no business on Memorial Drive.

The claim translates as a claim that the Cambridge City Council has a right to destroy but not to defend the environment.  The claim has the same value as the Development Department Staff’s 20 year insistence that the Urban Ring option which is likely to be the winner does not exist.

• Unexercised rights of the Cambridge City Council on Memorial Drive.

The deal by which you inflicted destruction on Magazine Beach included a provision that the City of Cambridge would take over management.

That has not happened.

I would anticipate it has not happened because the Cambridge City Council does not want to “know” of the outrages achieved there by Cambridge and the DCR.

Exercise your rights.  Insist first, however, that the bizarre wall be treated the same way as bordering vegetation everywhere else on the Charles River Basin, and be chopped down.

Insist that the poisons be stopped and the responsible grasses returned.

Insist that the playing fields delivered to you be the same or better than they were before the destruction commenced.

Insist that the expansion of this outrage blessed through corrupt action of the local Company Union not take place.

• The outrage on Memorial Drive, the secret part of the Grand Junction proposal.

The supposed plans do not show what you are destroying.  This is part of the usual packages of omissions.  Keep it secret.  I will go into this outrage in a separate communication concerning this deliberately secret destruction.

You claim to be pro environment.