A few weeks ago, I reported on wild turkeys running around Cambridge, MA, USA, one of the most densely populated cities in the USA.  Their home has been destroyed by Cambridge and the Massachusetts Department of Conservation and Recreation.

Hi Bob, hope this finds you well. I encountered the Cport turkey flock the other day at last. Six of them, relaxing on Franklin st. Here's some pix. They're low resolution so they won't clog your mail, have higher res versions if you can use them for anything. 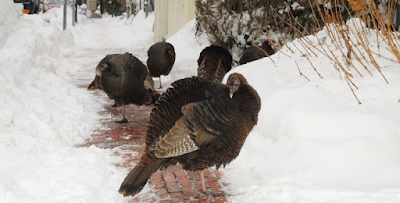 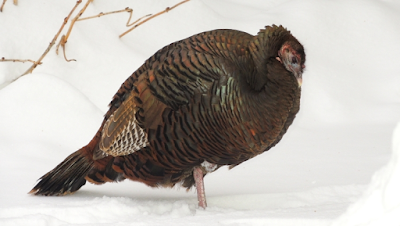 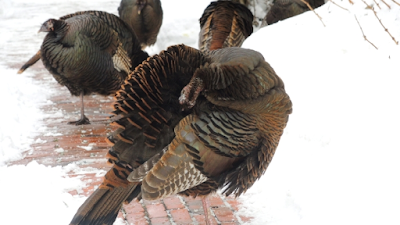 The photos look excellent to me.  Not the meaning behind the content, but the photos.  Thanks, Phil.

One of the goals of the Charles River Master Plan (which plan was ignored when it could be treated as a convenient lie) is to drive away or kill as many resident animals as they can get away with.

Then again Cambridge’s machine does do a non stop job of lying about the environmental sainthood of Cambridge, MA, USA, and its friends.

For my video on the latest real “achievement by Cambridge and its friends,” please see https://www.youtube.com/watch?v=pTplCCEJP7o.

This area is where these heartlessly abused animals used to live.  Phil’s photos are just more pieces of evidence of the non stop lying about environmental sainthood coming out of the Cambridge Machine.

The Cambridge Machine tactics are a sample of the “Big Lie” Technique.  As I recall, the technique was popular in some very destructive countries about two thirds of a century or so ago.
Posted by Friends of the White Geese at 3:38 PM