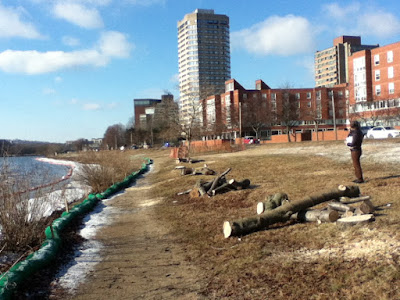 Charles River: “Neighborhood Association” admits it is a fraud.

I try in these reports to concentrate as much as possible on the really vile actors, the City of Cambridge, MA and the Department of Conservation and Recreation of the Commonwealth of Massachusetts.

The reality in Cambridge, however, is a system of fake groups which have grown up during the existence of the City Manager Machine which dates back to 1974, when the first of the regency declared his intention to create “neighborhood associations.”

It is amazing how these “independent groups” tend to think in lock step and frequently recognize a reality which has nothing to do with reality recognized by people outside their world.  But they sure do love to praise the City of Cambridge, and its friends, plus, all together too frequently, entities which are worse.

The fake neighborhood association which has fought for for years and has just helped Cambridge and the DCR achieve the destruction of hundreds of trees on Memorial Drive just broke a wall of silence on the vileness of the situation.

The latest explanation amounts to a declaration that they are obliged to be cheerleaders for these vile governmental entities, NO MATTER HOW IRRESPONSIBLE.  They argue that to allow responsible dissent on even the most obvious issues, the most irresponsible behavior by their government buddies, would risk them the loss of their tax exemption.

In short the newly discovered president has announced that they have a duty to be fraudulent when they call themselves a “neighborhood association.”

This is, reportedly, based on a legal opinion issued by the former president.  The former president seems to have been replaced without notice, or perhaps his disappearance was announced while I was being barred from access to the listserv.

Why would he have disappeared as president?

Could it have been a flier distributed by Friends of the White Geese which accurately communicated that the fake neighborhood association had gone public in its fight for destruction of the environment of the Charles River?

The reality, however, is that the core of the “neighborhood association” had been fighting for this destruction for years, using all sorts of corrupt techniques.

In the next meeting, the same former president was happily setting the group up to discuss the nature of saplings to replace the trees the fake neighborhood association had helped destroy on the wrong side of that magic line.  And somehow the magic line which “barred discussion” was no longer a concern.  Discussion was considered acceptable in exactly the same area which he said could not be discussed.

The fake neighborhood association wanted to be paid off.  They had gotten the destruction the DCR and Cambridge wanted.  The key part of the group wanted the joy of selecting saplings to replace the trees they should not have destroyed in the first place.

And our leaflet invited folks to the key meeting saying exactly that.  To no surprise, the joy the “neighborhood association” was seeking was suppressed at that meeting.  They had a guest they had wanted to provide input on replacement saplings, but the “neighborhood association” did not mention that they wanted the pay off they had been looking for, and promised, for the massive destruction.

I call that an admission of fraud.  That is not a neighborhood association.  It is a cheerleading group lying about its identity.  AND THE ONLY THING THAT IS UNUSUAL IS THE ADMISSION OF FRAUD.

Reality is highly offensive to Cambridge’s cheerleaders, regardless of the fraudulent names they apply to their lovely named groups, and regardless of their owned self proclaimed saintliness.
Posted by Friends of the White Geese at 3:07 PM

In my latest report, I reported on a fraudulent piece of protection by the Cambridge City Council, lying that it is environmentally responsible, as usual, by yelling at the other guy.

That report is at http://charlesriverwhitegeeseblog.blogspot.com/2016/04/charles-river-loggers-declare-sainthood.html.

I got a respectful, short email response, nicely favorable to the city council action, from a follower who provides a lot of positive comments which normally spin off into reports on this blog.

I gave him a detailed email response, and I was thinking of posting the exchange.

I, however, have just looked again at my post.

I appreciate this person’s response.  I appreciate his very clear constructive assistance over the years.  I acknowledge his positive concern by his response to this post.

I, however, have just reread the post.  It communicates reality very effectively.

To clarify one point.

The environmental outrage is real.

Fraudulent yelling at the other guy by the Cambridge City Council should be taken as what it is:   fraud whose most important value is to keep the house of cards from collapsing of its own weight by distracting an electorate which demands a responsible government.

The City of Cambridge doing the same responsible stuff IN PLACE OF RESPONSIBLE BEHAVIOR which only it can accomplish is due the contempt appropriately targeted at any other hypocrite.
Posted by Friends of the White Geese at 9:56 AM

Charles River: Loggers declare sainthood, yell at the other guy.

Charles River: Loggers declare sainthood, yell at the other guy.

During the destruction of hundreds of trees on Memorial Drive, the Cambridge, MA, City Council got condensed versions of these reports on the same scale as these reports came out.

The Cambridge City Council strongly declares itself environmental saints by yelling at the other guys, and keeps as silent as is viable about outrageous destruction by Cambridge and its friends, except to pay tabs as requested.

Now that Cambridge and the DCR have committed the massive destruction on the Charles River with hundreds more to go, the Cambridge City Council has decided to take action.

They are yelling at the other guy.

This irresponsible entity which is very happy to see and / or pay for the destruction of hundreds of trees by Cambridge / its friends, has just yelled at the general public.  They are standing up to excess use of bags, and they are taking a stand.

Naturally, they are as silent as possible about the outrages on the Charles which have happened and which are planned to get much worse, with massive destruction of animal habitat.  The same goes to their destruction of the Cambridge Common and Alewife.

The escalating outrages on the Charles, on the Cambridge Common and at Alewife directly conflict with the City Council’s stated saintliness on the environment.  THIS MUST BE KEPT SECRET.

So they yell about bags.

How dare anybody get displeased at them for the massive destruction by their friends of HUNDREDS OF healthy, excellent trees.

How dare anybody get displeased at the blatant make work for contractors!!

The Cambridge City Council is standing up to plastic bags.

And shame of you for objecting to their and their friends outrageous logging.

LOOK AT THE PLASTICS.

Business as usual in the City of Cambridge, MA, USA.

PS:  We do have a video on the outrage on the Charles.  We reported the schedule a few days ago.
Posted by Friends of the White Geese at 5:23 PM