1. Introduction.
2. Attack on transit related zoning rebuffed.
3. The history of the zoning.
4. Bikeway.
5. Objection to lies on the Grand Junction alternatives.
6. Contacts, Miscellaneous.

This is one of those many points which are related to the ongoing outrages on the Charles River, but you really need to know what you are doing to realize it.

I will try to put things in context without overwhelming. Please send questions to boblat@yahoo.com.

This is a cropped satellite photo with added language from a state filing in 2006. The Destroyed Nesting Area of the Charles River White Geese is at the bottom left of the photo. At the top of the photo, under the “p” in Cambridgeport, is 240 Sidney Street.

Neighbors of 240 Sidney Street in Cambridge first learned that their homes were going to be overwhelmed with a massive project at 240 Sidney Street when the developer sought relief from zoning requirements. The developer is building way out of scale with the existing neighborhood, and he wanted to provide less than the parking required under zoning law.

The zoning is based on the future construction of a rapid transit station close to the project, but the station is not coming and key representations by city staff concerning that station when the zoning was passed were blatantly false, and continue to be blatantly false.

I have reported on this zoning and on the proposed zoning amendment submitted by the neighbors which would have zoned that block so that it fits in with the neighborhood.

I warned the petitioners to avoid the “neighborhood association” because there are people in the group who are their proven enemies.

Recently, the neighbors have announced a “compromise” which fits in with the mentality of the Cambridge Machine. The good guys get to declare victory and the developers get their project.

I am not going to do the major effort needed to do a full review. I will give a brief summary.

Basically, the project has been required to provide the parking required under the zoning ordinance. The number of units proposed has been reduced but the number of units with more bedrooms has been increased. This sounds like the usual con games. The same amount of construction but with a slightly more politically correct configuration.

Naturally, you can never be positive just which “friend” was crucial in the decision, or if the petitioners simply got talked into it by the developers. But there is a very standard pattern.

It is a shame. This parcel and this zoning change could have been crucial, but the con artists are very strongly visible.

3. The history of the zoning.

The key to this zoning is the subway proposal known as the “Urban Ring” on which I have worked since about 1985. The idea is to connect the existing subway spoke arrangement with a new subway which crosses the spokes and allows people to travel about the Boston Metropolitan Area without adding to the congestion in the core downtown area.

In about 1986, shocked at the destructiveness of the subway proposal to the residential Cambridgeport neighborhood, I proposed an alternate crossing of the Charles River. In 1991, the Mass. Bay Transit Authority adopted my alternative as one of two possible ways for the subway to cross the Charles River. During the past few years, the state legislature has subsidized construction in the Fenway Park / Kenmore area which makes it highly unlikely that the original crossing will be implemented.

The City of Cambridge has consistently lied that the original crossing is the only Charles River crossing in existence. In the early 2000s, based on this flat out lie, the Cambridge City Council changed zoning districts in southern Cambridgeport around the Grand Junction railroad track to allow for the “Putnam Avenue” station on the crossing alternative which no longer seems likely to be implemented, the one the City lies is the only one on the table.

The second, higher, street, is Putnam Avenue. The proposed station on the crossing alternative which almost certainly will not occur would be at the point where Putnam Avenue strikes the Grand Junction.

Following Putnam Avenue to the left until you are below that “p” in Cambridgeport and you will be at the other end of the 240 Putnam Avenue project. The station which will never exist is the justification for the massive project which the neighbors apparently got conned out of objecting to.

Here are the two alternatives on the Cambridge side as submitted to environmental review by the state during consideration of the Urban Ring proposal. 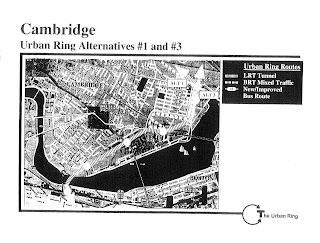 
This is the alternative which the City of Cambridge has lied for 22 years now that it does not exist. When this zoning was approved, the lie was “only” 12 years old.

The subway turns way before the Putnam Avenue Station which will never exist. The station shown on the map at the turn has always been described as an erroneous depiction. In both maps, the second station going up from the Charles River is at Massachusetts Avenue and the Grand Junction. The route south (down) from this station would travel under MIT’s athletic fields, and then under the Charles River, creating an excellent megastation with a station under Brookline Avenue and over the Massachusetts Turnpike (I90) which would connect to the existing Green Line station in Kenmore Square and to the Commuter Rail Yawkey Station (named after the long term Red Sox owner). This megastation would be very close to Fenway Park, the home field for the Boston Red Sox.

So, grossly disproportionate development was allowed in the 2000s zoning change at 240 Sidney and its area based on a lie that the allowed larger development would be associated with the Putnam Avenue station on an Urban Ring alignment which the City of Cambridge wants and which probably will not be built.

And the Cambridge Machine or others of their ilk look like they have conned the proponents of a very sensible zoning change into accepting next to nothing as a “compromise” rather than challenging zoning which was created based on a fraud which apparently continues to this day: the lie from the City of Cambridge that Putnam Station WILL BE built on the Urban Ring alternative which almost certainly will not be built but which Cambridge constantly insists is the only alternative under consideration.

Here is another copy of the cropped and marked satellite photo.

That black line to the right of the grand junction is pretty much certainly construction which is unbroken on that side of the Grand Junction.

This bikeway is another con game. The real goal is to widen the underpass under Memorial Drive so as to allow two lanes of traffic and a railroad track from the Grand Junction Railroad Bridge to allow Massachusetts Turnpike traffic to be moved from its current exit, now owned by Harvard University to the Grand Junction Railroad Bridge. Once the exit is built, the bikes would be moved to the responsible exit from the Grand Junction at that circle, following a very short connector to Vassar Street which turns at that exact point. The bikes would then connect to their target, Memorial Drive by a much shorter route, the route which would be responsible in the first place, but Cambridge loves fake promises if those fake promises can achieve what would be rejected if honestly be stated.

5. Objection to lies on the Grand Junction alternatives.

Turn your back on them and walk away fast.
Posted by Friends of the White Geese at 12:36 PM