I have had several reports on both sides of the situation on the Charles River.

It is an easier report to gripe at the outrages especially since Cambridge’s very belligerent corruption is so major a part of an outrageous situation.

Nevertheless, these beautiful beings continue to live as best they can in spite of a tiny minority of corruption entities who have a greatly disproportionate and bad impact on them.

But there is beauty on the Charles in spite of really destructive people. 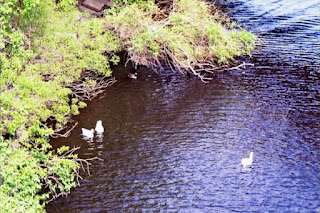 This is the view most people now see of the Charles River White Geese since they are barred from direct contact through a decade of outrages.

Three geese, two near shore, one further out, are enjoying the beautiful water.

When you talk to the destructive people destroying the Charles, their idea of creating a swimmable Charles River altogether too often turns out to be a wall on introduced vegetation preventing access between the Charles River and Magazine Beach, a wall which the key state manager has bragged starves the Charles River White Geese. 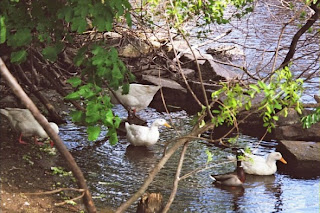 The Charles River White Ducks were dumped at Magazine Beach on July 22, 2006, the day before Friends of the White Geese conducted a five year memorial for Bumpy, the long time leader of the Charles White Geese who was assassinated by a repeat animal killer. The animal killer apparently progressed to rape and murder of a young woman at the location where he had been beating nesting Mother Geese to death.

These two beauties were so innocent when they were dropped off that they thought dogs were their friends, and they did not know what all that blue stuff was all about.

During our memorial for Bumpy, I saved the White Ducks from an attack by a dog sicced on them by a man passing by. I kicked the dog when he had the neck of one of the ducks in his mouth.

The first year they resided on the Charles, they lived in a native wild on the south side of the Charles in Boston. That native wild was apparently destroyed as part of the repeated environmental destruction by the falsely named Charles River “Conservancy.”

They are consistent. They destroy as part of environmental destruction. They refrain from destroying the introduced thicket whose primary purposes is heartless animal abuse.

The Boston Conservation Commission has expressed shock at the destructiveness of this falsely named group. 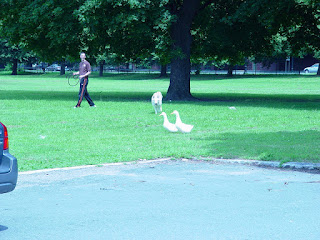 Courtesy of the Massachusetts Water Resources Authority who did photos of the event, here is a photo of the dog on attack. 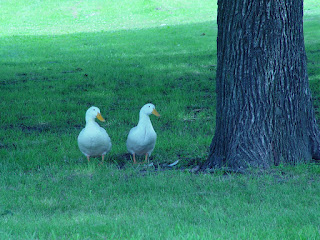 And a more pleasant MWRA photo from the same day, before the attack. They were apparently dropped at the foot of this tree at the opening to the Magazine Beach parking lot. They stayed there waiting for their owner to return.

Cambridge and the Department of Conservation and Recreation are aberrations but very destructive aberrations with a massive, corrupt, group in Cambridge running around signing their false praises. 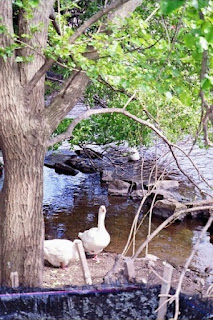 This is another view of the pretty much the same location as the third above, although a little to the east. 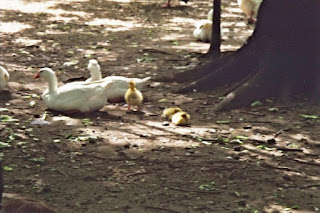 Posted by Friends of the White Geese at 7:40 AM