Techniques in Lying: “Underpasses” on the Charles River revisited

1. CRC’s record, abridged.
2. Latest attack.
3. Analysis.
A. Initial questions.
B. Prior examples of destruction on this side.
C. Summary.

Possibly the most destructive entity on the Charles River is a group which goes by the false name of Charles River “Conservancy”.

The CRC may be more destructive than the Department of Conservation and Recreation because I have seen the DCR join in a condemnation of at least one of the CRC projects as environmentally destructive.

One of the many environmental outrages supported by this group is environmental and habitat destruction on and in the Charles River.

They have been fighting for a new highway on the Cambridge side of the Charles River including destruction of hundreds of trees.

Responsible bureaucrats have condemned their highway on the Cambridge side of the Charles River as environmentally destructive. So they put a sob letter in the Cambridge Chronicle saying how they were being abused and that they would convert their emphasis to the Boston side.

This photo is from this group’s latest newsletter. It shows the CRC’s change of emphasis to the Boston / southern side of the Charles River. As usual, they call this proposal an underpass. 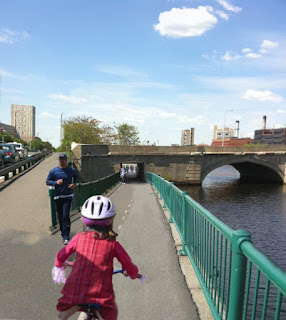 The relatively small ramp on the left is the existing bikeway / sidewalk. The larger highway / ramp to the right is the proposed construction.

The existing facility was clearly constructed so as to provide as much service as they could while minimizing environmental harm as much as possible. The bad guys do not bother themselves with such considerations.

But the bad guys do, falsely, call themselves environmental saints.

The thoughts that comes to my mind on looking at this proposal are environmental and historical.

This is the Boston end of the River Street Bridge, the next bridge to the west of the BU Bridge.

The shore area is already extremely crowded with highway development.

Not mentioned in the lovely description of this lovely project, as usual, is the harm the project will do. Lying by omission.

The only meaningful benefit out of it this project is that bicyclists do not have to share the obligations of cars. They can go through this area without stopping for a light. The poor dears.

What harm is done by further destruction of the Charles River for this project?

What harm is done to animal habitat by this project?

Expanding existing construction into the Charles River would very much certainly cause further habitat destruction.

B. Prior examples of destruction on this side.

The Charles River Conservancy is not unknown to the Boston Conservation Commission in this area. I have seen a very distressed number of members of members expressing great concern about CRC destruction of native vegetation needed for migratory waterfowl.

I have previously shown you photos of the Charles River White Ducks, Andrake and Daffney.

The area between here and the BU Bridge contained their home the first year they lived on the Charles River. Their home was directly across from Magazine Beach’s boat launch area destroyed in phase 1 of that destruction.

The home of the Charles River White Ducks was too far to the east to be affected by this project. In any case, their habitat and home was casually destroyed with destruction of native vegetation throughout this area abutting the Charles River between the BU Bridge and the River Street Bridge.

In any case, no mention, no concern. By lying in their name, these people claim to be environmental saints.

So they do the usual lying by omission from these fake groups.

Business as usual for fake environmentalists.