PREQUIL. Why the lies on subway possibilities?

The Cambridge Administration has spent ten or twenty years lying that there is only one option under consideration for Urban Ring rail. This is the option which would further destroy the Charles River animal habitat next to the BU Bridge. Since Cambridge is working with state bureaucrats to kill off animals all over the place, that makes sense to them.

Plus, of the two alternatives, the Kenmore Crossing (which Cambridge says does not exist) is the only meaningful alternative for environmental and transportation considerations. A common situation with regard to Cambridge’sdestructive policies: spouted as the only reasonable course when reality is the opposite.

All of these maps are documents from the MBTA, the local transit company.

This is the alternative for which the Cambridge Administration puts out a pretty much non stop lie that it is the only alternative under consideration. The long hashed line parallel to and crossing the Charles River and having two dots on it is the proposed streetcar / light rail line. 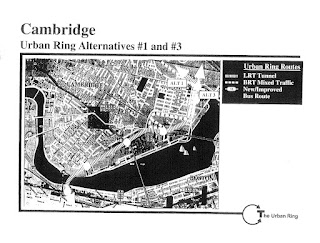 Even a brief review of this photo demonstrates very severe harm to their habitat. 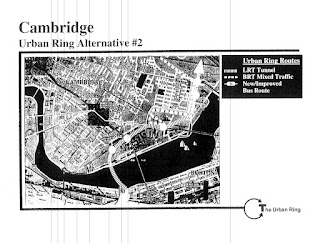 The Cambridge Administration has spent ten or twenty years saying that this alternative does not exist.

It is environmentally responsible in dramatic contrast to the Administration’s falsely described “only” route.

It has been subsidized by millions of dollars from the Legislature to upgrade Yawkey Station in place. Yawkey station in its current location is a key part of the Kenmore Crossing. The Cambridge Administration’s “only” route would require Yawkey Station to be moved a half mile or more.

Three maps follow the text in this letter. [Ed: in this reprint, these three maps are inserted with the text.] The first is the MBTA’s unedited presentation of the two alternatives on the Boston side. This is followed by my edit emphasizing the BU Bridge Crossing and my edit emphasizing the Kenmore Crossing. These maps are presented separately from text because trying to combine text and maps has confused my computer, even after upgrading the computer. 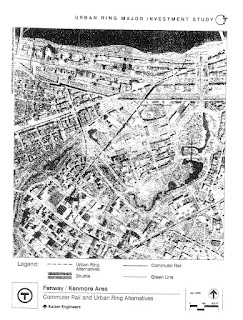 The line curves just before Huntington Avenue under the Massachusetts College of Art. It then curves again at Ruggles Street under undeveloped property of the Wentworth Institute of Technology. It ends at Ruggles Station on the Orange Line which is just off the map at bottom right.

Ruggles Station is off the map at bottom right. 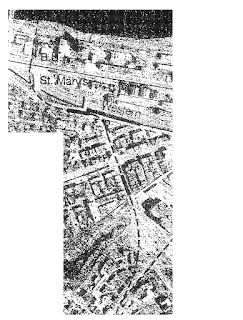 The path is hard to make out. At the top of the map, just south of the Charles River, the path is just to the left of “BU”. It turns and comes to a black rectangle indicating the combined Urban Ring station at St. Mary’s and the relocated Yawkey Station. Connection to the Green Line Commonwealth Avenue branch is by tunnel under St. Mary’s dropping people on the south sidewalk of Commonwealth Avenue.

The route then turns at Park Drive and comes to another underground station between a new Green Line Station under Beacon Street (Green Line, Cleveland Circle branch) and the Riverside Station (Riverside Branch of the Green Line).

The necessary new station on the Cleveland Circle line (C branch) at Beacon and Park Drive to make the connection with the Urban Ring streetcar is not shown on the map. 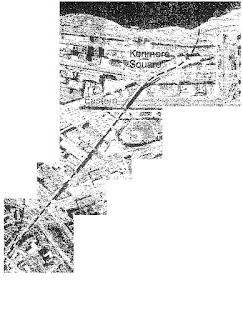 As shown, the Kenmore Crossing would have a new station under Brookline Avenue with direct connections to Yawkey Station, Kenmore Station and Fenway Park, creating covered connections among Commuter Rail, Urban Ring and the three Green Line Branches.

The new station shows on the map as a solid rectangle rising to the right slightly more than half an inch below “Kenmore Square.”

Yawkey Station shows on the map as the less large black rectangle above and to the left of the proposed Urban Ring station.

The legislature is spending millions upgrading Yawkey Station. Thus, Yawkey Station is not going anywhere, contrary to the needs of the BU Bridge Crossing.

The Kenmore Crossing line proceeds under Brookline Ave., going under BIDMC as shown on the General Map.

4. Reality and the Cambridge Administration.

The Cambridge Administration and its activists and influenced organizations have spent years denying the existence of the Kenmore Crossing.

They have no meaningful argument for the BU Bridge Crossing.

The Kenmore Crossing is far superior both from an environmental and a transportation point of view. It has now received millions of dollars in subsidies in the legislature’s funds for the upgrading of Yawkey Station in place.

So they simply and repeatedly for very many years have denied that the Kenmore Crossing exists.

POSTSCRIPT, history of this report.

The Cambridge City Clerk’s posting of the letter may be seen as appendix 1 at http://www2.cambridgema.gov/CityOfCambridge_Content/documents/LaTremouille%20com.pdf.

The situation has simply gotten much more massive and more destructive since then.
Posted by Friends of the White Geese at 11:58 AM