Thank you to Phil Barber for pointing out the following from the Boston Globe in December 2012: 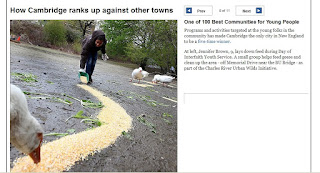 The lies which Cambridge puts out about itself are multiplied by unknowing reporters repeating those lies.

It is silly to call the repeat of the lies by the Cambridge Machine “unknowing.”

Cambridge and the DCR are doing everything they can, in particular, to kill off the Charles River White Geese.

My current series of reports provides multiple photos about the latest outrage in this exact location.

It is the goal of Cambridge and the Department of Conservation and Recreation to kill off all resident animals on the Charles River.

Cambridge and the DCR have indulged in October - November 2011 in a massive destruction of acres of Alewife including a pogrom of hundreds of resident animals.

I have done a series of reports on the latest outrage. I will follow shortly with a detailed update with new photos and links to old photos
Posted by Friends of the White Geese at 9:10 AM