We have been reporting on the states’ plans to destroy trees on the ramp from Memorial Drive to the Longfellow Bridge inbound near Kendall Square, in Cambridge, MA, USA.

Misha has forwarded two photos he took, on the evening of Thursday, June 8, 2013. My delay in forwarding. I regret that.

The original photos are about 3 megs apiece. I have them and will provide them on request to boblat@yahoo.com. 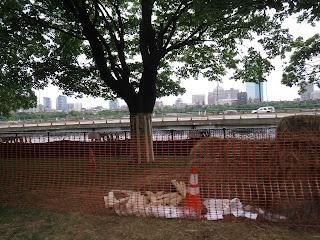 So, the main change seems to be that a number of other trees are being protected, either by a red plastic fence, or by wrapping, or by both.

On the attached photo we see a tree protected by both the red fence fence and by wrapping.

It seems that they expect the construction environment to be too harsh for the trees to survive unprotected. 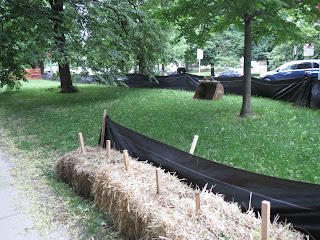 The second of the two photos (both are taken yesterday evening, Thu Jun 6) shows the unchanged part of the overall border marked with bales of hay. The two trees on this photo are unprotected, the left one is marked for destruction, the right one is marked for transplantation.

Mishka provided some excellent photos of this outrageous situation which we published at http://charlesriverwhitegeeseblog.blogspot.com/2013/05/large-number-of-excellent-trees.html.

The big environmental problem in Cambridge is the flat out corruption. Councilors run for office lying that they are environmentalists and are presiding over mass environmental destruction and animal abuse associated with totally avoidable aspects of their and their friends construction projects.

We reported on WBZ Radio’s repeated mocking of the Cambridge Machine’s “Safe Street Coalition” by replaying an astute comment by Dan Rae, at http://charlesriverwhitegeeseblog.blogspot.com/2013/06/new-englands-top-radio-station-mocks.html.

Our report included an analysis of this typical Cambridge Machine organization and providing disclosures from me.

If the Boston Sierra Club “expert” answer “yes,” that he / she is familiar with the Urban Ring rapid transit proposal, ask how many rail options there are. If the answer is “one,” you are getting the flat out lie put out by the City of Cambridge.

Cambridge’s nonsensical proposal would move Yawkey Station three blocks. It would not work without moving Yawkey Station. The Kenmore Crossing uses the now subsidized and being expanded Yawkey Station as part of a brilliant megastation.

Posted by Friends of the White Geese at 11:25 AM