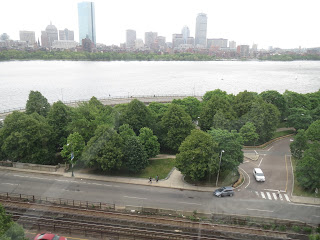 At 7 to 9 pm, tomorrow, Wednesday, July 10, the Massachusetts Department of Transportation (MassDOT) will hold a “public hearing” on the Longfellow Bridge renovations in Kendall Square, Cambridge, MA, USA.

One excellent grove on top of the Red Line has already been destroyed, supposedly for traffic convenience, even though there are many ways to route traffic without destroying that excellent grove.

As of the start of the day today, the manager has already moved one excellent tree from the magnificent grove on the ramp from Memorial Drive to the Longfellow Bridge heading to Boston, and her announcement was that destruction would recommence yesterday, July 9.

Why this destruction? She is putting in an engineer’s toy in place of this irreplaceable grove. She is collecting rain water from the bridge in a fancy natural drainage system. She is above putting her precious drain water in the sewers maintained by Cambridge or by the Department of Conservation and Recreation.

Bizarre! But she is dealing with the City of Cambridge where bizarre, destructive environmental attacks are normal by Cambridge and the Department of Conservation and Recreation. Cambridge has a massive Machine running around calling the city holier than thou to prove that these destroyers are “holier than thou.”

The exact address is 45 Carleton Street, #111, Cambridge, MA. This is a Massachusetts Institute of Technology building. Carleton Street dead ends at the plaza for the main portion of the Red Line Kendall stop. If you come by the Red Line, go up to the ground off the Red Line, stand with your back to the hotel, and it is perhaps the third or fourth building straight ahead and to the left. There are also many buses to Kendall Square and, really, it is not that difficult to get off the number 1 bus at the Main Entrance to MIT and walk to the far end of the infinite corridor. Then ask. You will wind up very close although not as close as is the public transportation to Kendall.

It would be nice if you would attend, but the bad faith is so extreme. This woman explains her environmental destruction in part on an allegation that it is the public’s job to stop her destructiveness and that prior hearings IN BOSTON with fine print somewhere on this destruction relieves her of responsibility for her own actions. While she does loudly claim that this destruction is necessary.

Needless to say, I am highly not impressed with the calling of this first public meeting in Cambridge. I have tried to attend the Boston meetings on this project, and I anticipate attending this one as well.

Contact information is at the bottom of this report should you wish to object to this or other outrages.

Every incumbent city councilor is worthy of condemnation if you are pro environment. Davis has run as an environmentalist (as has Craig Kelley). That means she, falsely, has been getting votes from people who want their environment protected.

To just start things off, Davis’s record has been belligerently destructive of the Charles River.

If environmental destroyers were not lying to people about which side they are on, Cambridge could conceivably have responsible members on the city council.

Environmental destroyers are aided in their fraud on the voters by the presence in the local Sierra Club of individuals who have been prominent and destructive as Cambridge Pols. With those people in place, it is not at surprising to see the Boston Sierra Club joining in the lie that Cambridge has sitting City Councilors who are pro environment.

The Cambridge Machine aggressively controls politics in Cambridge, MA, USA. Key in their control, from an environmental point of view, is their secret definition of “environmentalism.”

Alewife, the Charles River, the Cambridge Common, Fresh Pond are being, have been subjected to and/or are planned for major destruction, and these frauds run on claims of being “environmentalists,” using this fraudulent definition and a massive, irresponsible Cambridge Machine.

Good riddance to Davis if she is leaving, but an environmentally responsible replacement is highly unlikely.

If you feel like doing something meaningful, please do the following as rapidly as possible. Destruction was announced to resume Monday, July 8.