They have lived on the Charles River for 32 years. They have an established community which is under attack by a really rotten city government and their friends at the state. All attacks have been done in secret, without public notice, and commonly with lies to the opposite extent.

The current outrage is Governor Patrick’s House Bill H3332 seeking bond authorization in the amount of $24 million to destroy their habitat that much further along with hundreds of trees between the BU Bridge and the Longfellow Bridge on the Cambridge side Charles River. The most aggressive fighter is running around lying about “underpasses” which are paired with the destruction in the amount of $4 million. She says fight for her $4 million and do not look at the $24 million to which it is tied.

She even has the nerve to give a fraudulent name to her destructive organization. “Conservancy” indeed.

The current weather situation was ideal for geese, heavy rain with temperatures approach 60. A pleasant day if the city, state, and their front organizations were equally commendable.

Here are some photos of the Charles River White Geese. 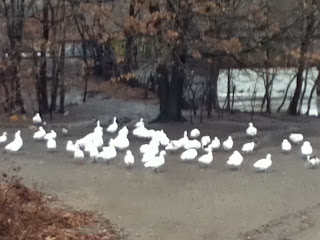 The vegetation in the lower left is a tiny portion of the ground vegetation which used to be everywhere between the BU Bridge and the BU Boathouse a tenth of a mile to the east. Almost all of this ground vegetation has been destroyed by the falsely named Charles River "Conservancy", by city / state / by their friends.


A better Photo of vegetation: 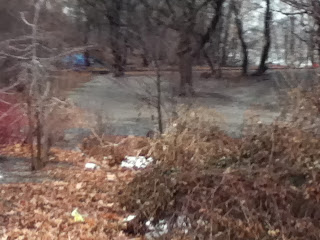 The Charles River can be seen in the upper right. The ground has been stripped by these rotten people.


The geese were under their favorite big tree, but they started wandering around when I came. It was a beautiful day to wander. Once again, the ground vegetation has been destroyed. This area was hit even worse being used as a parking lot for workers on the railroad on the other side of the trees in spite of the proximity of ample parking space outside the nesting area.

The Charles River, again, is to the upper right. The railroad is on top of the embankment to the left. On the lower left is native vegetation in winter. 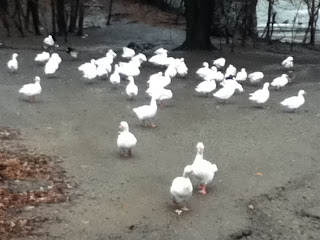 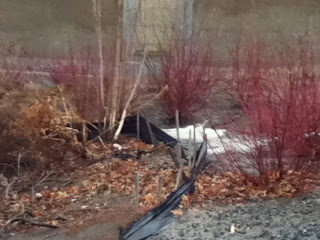 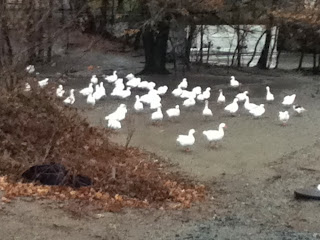 I wandered next to the BU Bridge. The only area which needed destruction for work on the BU Bridge is this area. It was 50 feet wide. Most this strip has apparently been left uncovered. Here are two members of the gaggle who followed me. 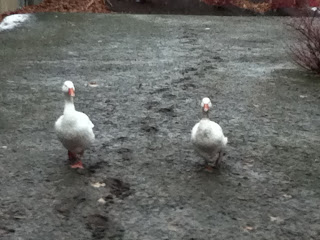 In this photo, there is a goose toward the left and slightly above the rest of the gaggle. 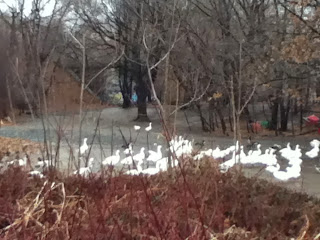 Nearest the camera is a goose with dark markings on her head.

There have been two females who have had a number of offspring with pure white geese. One of the females is Brown Beauty, the daughter of the long time leader of the gaggle, Bumpy. She has vestigial brown goose markings. The other female is a Toulouse Goose who was abandoned at Magazine Beach 13 years ago and joined the gaggle.

The goose you see is the offspring of one of these two, either directly or through an intermediate generation. 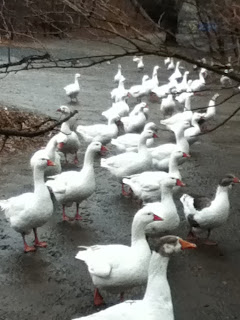 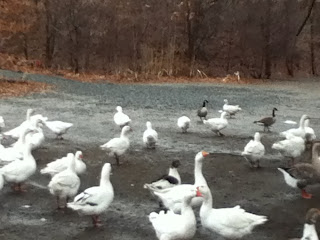 A better view of the Charles River, from the Destroyed Nesting Area. The figures are Canadas. The shape in the top of the photo is the Grand Junction Railroad Bridge. Harvard is maneuvering to widen this bridge and turn it into an off ramp from I90 (the Massachusetts Turnpike). Harvard owns the current exit facilities to Brighton and Cambridge. The Governor has already announced plans to move the highway to the northwest. He mentioned development in the area. He did not mention it will be tax exempt, a relocated Harvard Medical School and related facilities. Harvard’s holdings are larger than Boston’s Back Bay neighborhood. 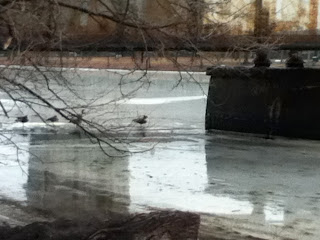 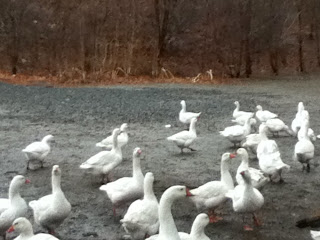 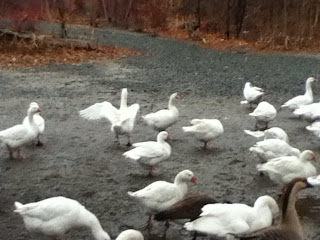 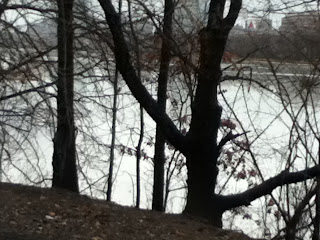 Looking back through the gaggle. In the distance is the BU Bridge. The vegetation in most of my prior photos is in the middle of this photo. 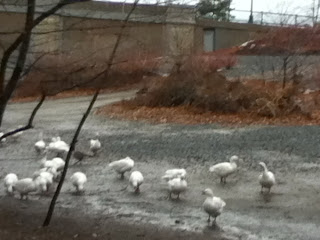 I walked along the railroad and came down at the end of the trees bordering the tracks. The shape at the top of the photo is the on ramp to Memorial Drive. This ground vegetation was not destroyed. It continues to line the support for the on ramp between the area of the BU Bridge work and the railroad track broken only by a staircase illegally installed by Boston University by verbal agreement with the state.

I am not certain what happened to the nearest vegetation. That is the normal situation with vegetation destruction. Workers come in and destroy. This area was used by the railroad workers. It is the only area they should have used. They should have accessed parking on the other side of the on ramp by going up that staircase. 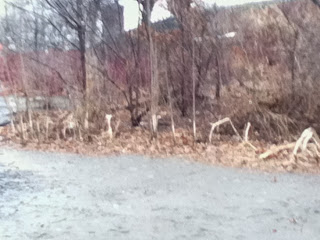 The gravel toward the top of the photo was installed by the state as part of “repairs” of the BU Bridge project. The damaged vegetation in the prior photo is bottom right. The bizarre extension of the gravel to the core goose area is at the bottom. At the very top can be seen the added wall to keep the Charles River White Geese from feeding on the grass on the other side of the on ramp to Memorial Drive. 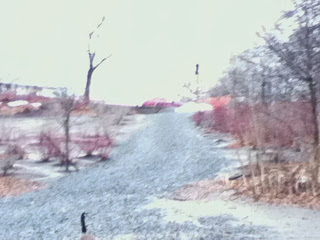 To the right is the latest starvation fence. Then, moving right to left, is the sidewalk, then the on ramp, then the tiny amount of grass which was the only food not denied to them. At the top is the overpass for Memorial Drive. The Charles River White Geese are very considerate pedestrians. They look left and right and do not cross until traffic is clear. Their problem is that they are geese and do tend to meander. The drivers are very loving of the Charles River White Geese. The drivers patiently wait with big smiles on their faces.

At the top is a former Ford factory, currently owned by the Massachusetts Institution of Technology. 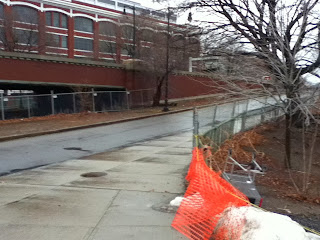 Looking through the latest starvation fence. The white figures barely visible at the other end of the gravel are the Charles River White Geese. Above them is the hillside holding the railroad track, the location from which I took several of the above shots, and the Charles River. 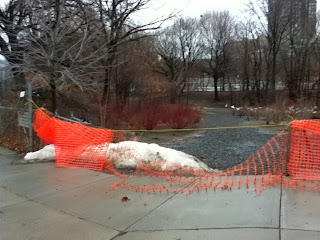 
(2) the former school committee member who just got sworn into the Cambridge City Council fought for the outrages at the Magazine Beach playing fields;


(a) his indignant explanation is that he claims to be only responsible for the good stuff;

Posted by Friends of the White Geese at 7:15 PM