The Charles River is starting to thaw, so some very happy Charles River White Geese were checking out the free water. All but one of the Canadas are standing on ice. The Emden Goose on the right had just had a good drink. The black and white White Goose to his left is just leaving after a swim. 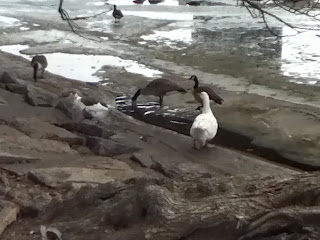 There are two or three members of the gaggle of the Charles River White Geese who have extensive brown markings. The black and white one is either the offspring of the Toulouse Goose who is a member of the gaggle or of Brown Beauty who is or was the daughter of Bumpy, the murdered long time leader of the gaggle. 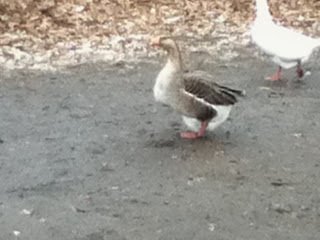 This is the Toulouse Goose. She was dumped at Magazine Beach with her sister in fall 2000. She mated a white and, after several seasons of trying did have her first brood. She is heavier in the body than either the Emdens or the Chinas who are the primary breeds of the Charles River White Geese. 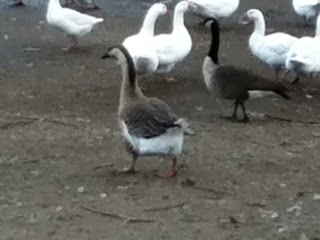 This is the male who was hatched in the mid 2000's from two clearly White Geese. Like Brown Beauty, he has the markings of a Brown China. These are vestigial markings. The two are decidedly a minority.

I am getting concerned about Brown Beauty. She was hatched in 1996 and would now be approaching her 18th birthday. I have not seen her this season. It is possible she has passed away. A major problem with such musings is that I get these concerns and pretty much always find myself proven wrong.

All members of the gaggle with mixed markings, including the goose above, are offspring of either Brown Beauty or of the Toulouse.

Here are a couple more photos of the gaggle from today: 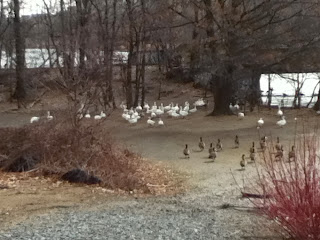 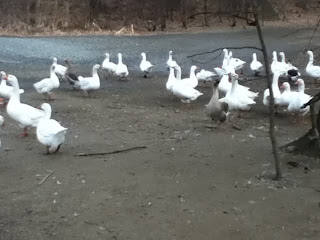 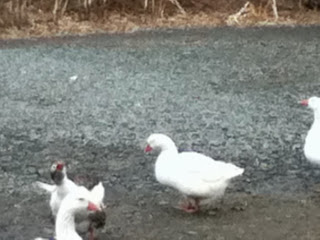 Very visible in too many of these pictures are the outrageous crushed stone dumped by irresponsible railroad workers and made worse after they left by the usual “unknown” entities which can only be the Department of Conservation and Recreation and/or their friends.

2. The River west of the BU Bridge, in Cambridge, MA.

Here is Magazine Beach on the Charles River from the BU Bridge.

The second photo in its entirety shows nothing but introduced vegetation. The first also includes vegetation next to the Massachusetts Water Resources Authority sewerage treatment plant, which is between the BU Bridge and the Magazine Beach playing fields. The MWRA have been friends. The DCR and its fellow travelers from the Cambridge Machine are rotten.

The vegetation bordering the Charles River at the Magazine Beach playing fields was introduced by the DCR IN DIRECT VIOLATION OF THEIR PUBLIC PROMISE to provide a “lawn to the river.” The key manager has bragged that this bizarre wall starves the Charles River White Geese, blocking their access to grasses at Magazine Beach which were their principal source of food until the heartless starvation commenced.

This liar has spent most of the period since 2000 lying that he “has no intention” to harm the Charles River White Geese. The most glaring quote of this corrupt statement was placed by the Boston Globe to the right of a photo of a massive earth mover looming over one of the gaggle the day these heartless people started starving them. 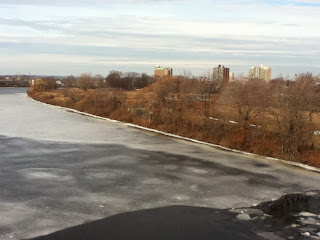 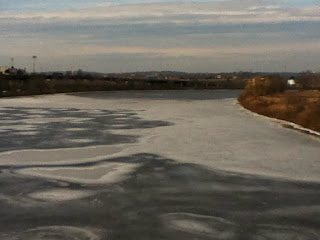 So the Cambridge Machine has presented this bureaucrat as a person worthy of respect and then indulged in corrupt tactics to expand the destruction put in place in secret / in direct violation of promises.
Posted by Friends of the White Geese at 5:17 PM