1. The Mass. Pike reconstruction could be coordinated with the Olympics.
2. Green Line A  Street Car line.
3. Olympic / Harvard Housing.
4. Connection to Kenmore.
5. Summary.
6. Yet another conflict with “reality” Cambridge style.


1. The Mass. Pike reconstruction could be coordinated with the Olympics.

Massachusetts’ Department of Transportation has been working on a rebuilding of I90 / Massachusetts Turnpike (Mass. Pike) on the Boston / south side of the Charles River across from Magazine Beach.

Here is one of the plans I provided MassDOT for a new streetcar line through the area connecting Boston University at the BU Bridge and Commonwealth Avenue to Harvard station in Harvard Square.  The Pike is visible from the Magazine Beach playing fields which the Olympics people want to use, destroying the starvation wall built by Cambridge / friends to starve the Charles River White Geese. 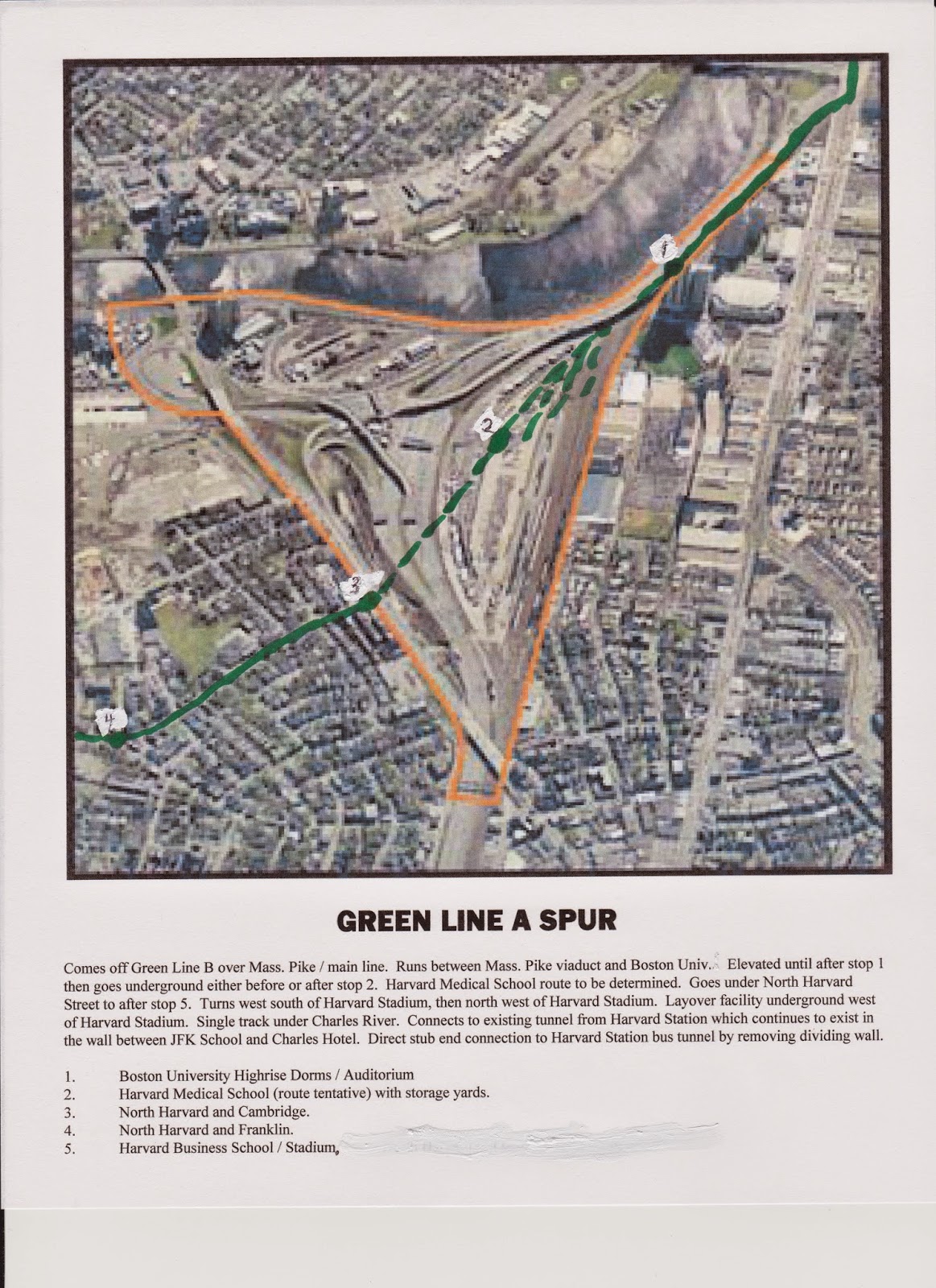 This plan would work very well with the timing of the Olympic proposal and provided needed transportation for the Olympics and for the North Allston neighborhood which is badly in need of better public transportation.

Service on the streetcar line, Green Line B could provide transportation to the Boston End of the BU Bridge.  Service could be greatly improved by construction of the Green Line A spur from there to Harvard Square.

Timing would be perfect for construction of an Olympics Village at the southern end of Harvard’s holdings which are greatly impacted by MassDOT’s planned rearrangement of the Mass. Pike.  I have posted photos of this area which is currently deserted except for the to be moved Mass. Pike.

The Mass. Pike rearrangement would be perfectly timed to create an Olympics Village on otherwise unused land with excellent streetcar connections to Harvard Square and to Boston’s Kenmore Square / Back Bay / downtown.

This plan is based on MassDOT’s original diagram of the reconstruction area.  The point down triangle is almost all owned by Harvard.  The area is comparable to Boston’s Back Bay neighborhood in size.

The Charles River is at the top.  The Magazine Beach playing fields are above it on the right.  The BU Bridge is barely visible at the very top.  And the ghetto to which the Charles River White Geese are confined without food is above the BU Bridge at its left.

Boston’s Commonwealth Avenue is the wide highway parallel to the right side of Harvard triangular piece of property.

The Mass. Pike currently comes from the upper right hand corner, under Commonwealth Avenue next to my hand-drawn line with the 1 next to it.  It proceeds, with exit ramps, to the left corner of Harvard’s triangle, and then down to the bottom point.  The rearrangement would run the Mass. Pike to that bottom point by way of my letter 2 in the middle.

The portion of the Mass. Pike next to the line and the 1 is being torn down because of age and wear and being rebuilt.  That portion of the road runs close to Boston University buildings, but there is room enough between the two to insert a street car line.

The full length of the straight road contained “Green Line A”.  At the bend, “Green Line B” turned with Commonwealth Avenue.  Green Line B leaves Green Line A by a switch at the turning point which would be identical to one used to run a new Green Line A between the Mass. Pike and Boston University.

The number 1 indicates a stop behind Boston University’s new residential / athletic complex.  My proposal would have the streetcar line turn where you see the dashed lines.  Commonwealth Avenue is on a bridge above the Mass. Pike.  The street car line would be constructed on a gradually lowered bridge from Commonwealth Avenue, reaching ground near the point where the line turns and proceeding underground from there to Harvard Square.

The spur would go under the Charles River and connect to an EXISTING TUNNEL adjacent to existing underground bus tunnels which are part of Harvard Station.  The existing tunnel originally connected the Red Line to a storage yard under what is now JFK Park, Harvard’s JFK School, and the Charles Center hotel / condo complex.

The area between the turn and station 3 is not exact and would vary depending on MassDOT plans.

To the right of the streetcar spur, at the point of the turn between station 1 and 2, there are dashed lines.  These currently, roughly correspond to a storage yard intended for layover of passenger trains servicing Boston’s South Station.  The street car line at this point roughly corresponds to the relocated Mass. Pike, which should ideally be above the street car line.  To the left of the Mass. Pike should be further storage for South Station and storage for the streetcar line.  Smart planning would put one underground and the other above it.

Stations 3 and 4 under North Harvard Street would provide badly needed service for the Allston neighborhood.  Station 4, additionally, would service Harvard’s planned development on Western Avenue which is off the map to the left.

An additional smaller street car yard should be placed near station 5 to correspond to a layover place for street cars before going under the Charles River, since the very end could only be one track.  The yard would allow for temporary layovers of other vehicles between runs as well.

The residential construction would be a welcome improvement for Allston residents on neighboring streets on both sides of the project and would be convenient to Boston’s Allston Village shopping area.

Here is a Boston University public map showing the area to the east of the area shown above. 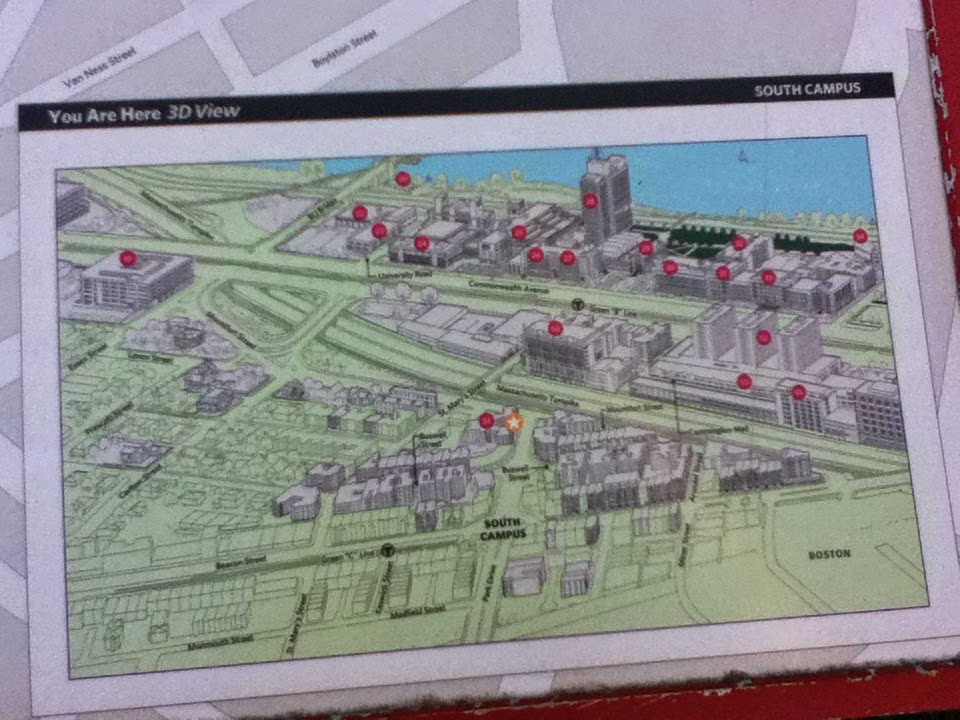 The left top corner is the eastern extension of the area we have been discussing.

Slightly to the left of the Commonwealth Avenue / BU Bridge intersection, the Mass. Pike "viaduct" becomes a highway constructed with direct ground support.  The "viaduct" is the portion of the Mass. Pike being rebuilt.

One Boston University building can be seen on the left between Commonwealth Avenue and the Mass. Pike.  The Green Line A spur would go between the two.

The existing Green Line B in the middle of Commonwealth Avenue would be used to join Green Lines C and D at Kenmore Station in Kenmore Square to the right of this map.

There is a Green Line B station at the letter T several blocks east of the switch for Green Line A.  This station is very close to another station servicing this part of Boston University.  It could readily be moved so that it is one block east of the BU Bridge where it would provide excellent service for Magazine Beach on the other end of the BU Bridge, and really would provide a better location for service for everybody than the existing location.

The existing lights at the neighboring intersection should be adjusted accordingly.

Harvard is in the habit of having other folks pay for many of its capital projects.  The housing proposal works so well, I will be amazed if it is not already part of the plans.

Harvard proposes to service its Medical School by a spur off the Red Line in Harvard Square which would start one stop outbound from Harvard Station and destroy the existing, very large, passenger lobby of Harvard Station.

This proposal would be “deep bore” construction as opposed to “cut and cover” by which Green Line A would be built.

The difference in cost would be a very large magnitude of difference.

Harvard’s proposal would only stop at the new Harvard Medical School and then at a tunnel which would have buses to transfer to Harvard’s continuing Longwood Hospital Area, where the Medical School is currently located.  This would provide the medical students their very expensive shuttle train from the school to the hospitals..

My Green Line A would temporarily transfer to buses at Kenmore Station.  It would be and could be built decades before Harvard’s Red Line spur is dreamed of.  Green Line A could be ready for the Olympics.


6. Yet another conflict with “reality” Cambridge style.

The Kenmore Crossing is the almost certain alternate Charles River crossing to be used for the Urban Ring subway which has been discussed connecting the Orange Line in Charlestown to the Green Line at Lechmere to the Red Line at Kendall to Green Lines B, C and D, to the Harvard / Longwood Medical Area to the Orange Line at Ruggles.

I first proposed the Kenmore Crossing in 1986.  It was adopted as a formal alternative by the Massachusetts Bay Transportation Authority in 1991.

A different crossing, the BU Bridge crossing, was first considered but an excellent reconstruction and expansion of the Kenmore Station on the Kenmore Crossing alternative has essentially been subsidized by the legislature by funds for expansion of Yawkey Commuter Rail Station.  Under the Urban Ring Kenmore Crossing, Yawkey Station would connect to Kenmore with an Urban Ring station above the Mass. Pike under Brookline Ave. providing the connection.

Cambridge wants the environmentally destructive BU Bridge crossing which would only work if Yawkey Station were moved.  That seems unlikely given the moneys expended by the state to upgrade Yawkey Station in place.

But meaningful analysis of Urban Ring phase 1 are a much longer explanation.  Links to the explanation are on the main page of this blog.

Green Line A would provide transportation for the Olympics, save a lot of money, and get done faster.  It would coordinate very nicely with the winning Kenmore Crossing Urban Ring subway alternative.  The Orange Line spur aspect would provide direct heavy rail connection to the Longwood Medical Area and Kenmore from downtown Boston, reducing pressure on the streetcar service in the Back Bay.

If Cambridge persists with the lie of the nonexistence of the Kenmore Crossing alternative, I wonder how long the lie will continue.  There are a lot of people in Cambridge, including folks claiming to represent the Sierra Club who still seem to believe that lie, a lie which is believed by no one clean of the filth in Cambridge.  Nevertheless, this lie is one of quite a few lies which pass as truth by folks impacted by the City of Cambridge.

Nevertheless, an Olympic village at the bottom tip of the Harvard triangle would have tremendous value, with Green Line A, for the Olympics, for the neighborhood and other Harvard neighbors, and for short term (less than Centuries) Harvard residential planning.  Interim use for rental purposes until Harvard needs the facilities for its own students would not be at all surprising.
Posted by Friends of the White Geese at 4:41 PM