Charles River: Green Line A for Olympics, map with options

Charles River: Green Line A for Olympics, map with options.

1. Introductory.
2. Analysis.
a. Preferred alternative.
(1) Boston University Central stop on Green Line B..
(2) The rest of the preferred package.
b. Other possibilities.
(1) General.
(2) Differences between preferred and alternative routes.
(a) Southern End.
(b) Harvard Medical School site, and general considerations.
(c) Cambridge Street to Western Avenue.
(d) Western Avenue to the Charles River.
(e) Charles River and north.
3. The prior reports:

I have been presenting prior reports in this series at the beginning.  They are getting to be too much, so now they are at the end.

In my last report, I passed on a good comment from a friend that there are alternatives to what I have been presenting for possible rapid transit supporting the Olympics in the Allston neighborhood of Boston.  I commented that it was an excellent suggestion, so I have gone forward with an expanded package.

First of all, thanks to the Boston Redevelopment Authority, Maps Department, for printing me a relevant map of North Allston including a bit of Cambridge.  It is appreciated.  I have cropped that map and marked it up.

There are two types of markings on the map.

The added solid, dark blue line is the route I think makes the most sense.

The broken, red, lines are other alternatives which also make sense, but which I think are not as good as the solid dark blue line.

The map includes the current situation and the massive amount of highway spaghetti in the current location of Harvard’s intended Medical School, a location which strikes me as highly appropriate for a lot more uses than are currently on the table.

Here is my first attempt.  I STRONGLY WOULD APPRECIATE suggested changes to the red broken lines.  I have deeply thought out the route which I consider the best.  I have done much less thought on the other routes. 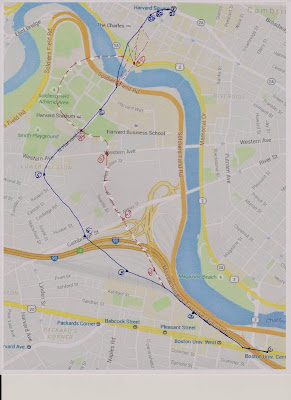 I am presenting one more stop on the preferred alternative, and renumbering accordingly.

The Green Line A would run off the MBTA’s existing rapid transit Green Line B by switches inserted in Green Line B’s tracks just west of the BU Bridge.  I provided photos in the second report.

It would connect to Downtown Boston on the Green Line B tracks and into the system.

There is one improvement that should be made to the existing Green Line B close to Green Line A for the Olympics that makes sense in addition to creating the Green Line A spur.

The change would be to move the Boston University Central stop to a location just a block off the BU Bridge.  This stop is currently really too close to Boston University East stop, and the move makes sense on its own.  The move would greatly ease public access to events at the Magazine Beach playing fields on the other side of the BU Bridge and would do negligible harm to the existing situation.

The map shows part of the label for the existing stop.  It is that close.

The Magazine Beach playing fields are a location where the Olympics folks are a breath of fresh air in contrast to the vile situation with regard to Cambridge and its filth.

Cambridge and company are deliberately starving the 34 year resident Charles River White Geese by walling off their food at the Magazine Beach Playing Fields with a bizarre wall of invasive introduced vegetation which is in place as a result of a bunch of lies and is being kept in place by the gross malfeasance of a whole bunch of vile people.

This is the only part of the Charles River basin where bordering vegetation is NOT chopped down twice a year.

The Olympics folks want to tear down that bizarre wall.  They are normal, decent, human beings.  They are a tremendous improvement over the vile situation with Cambridge and its buddies.

(2) The rest of the preferred package.

I have gone over this in detail.  On this map, I have combined a bunch of maps which are included in the prior reports, especially the first report.

I prefer this route because it provides much better support for the Olympics and the Allston neighborhood than the alternatives.

Basically, it is impossible for me to say much negative about the other possibilities.  These are ideas that I started out with.  After a great deal of thought, I consider these possibilities good, but not the best way to go.

(2) Differences between preferred and alternative routes.

Both the preferred and the alternative route are the same route running from Commonwealth Avenue to the Harvard Medical School site.

They separate upon entry to the site.  The map shows the current configuration, the spaghetti of the I90 off ramp to Cambridge and Allston.  This construction is being drastically simplified.  The highway itself will be moved down, toward what I am showing as stop 3, Harvard Medical School.

The highway is raised before the Medical School site.  The Green Line A would go over the side of the Commonwealth Avenue bridge above the Mass. Pike (wrongly shown as below the Mass. Pike on the map).

They meet in the middle with Green Line A constructed between the Mass. Pike and neighborhing Boston University buildings.

Stop 2 on Green Line A would be a raised station exiting to a large plaza in Boston University’s recently constructed high right residential buildings.

This is a segment which will require a change in the map.  Green Line A needs a storage yard.  The only place to put it is in the Harvard Medical School area with storage for South Station anticipated in this area.  I will add the storage between the two alternatives for simplicity of presentation, but the exact location would have to depend on which alternative Green Line A is chosen.  I would like to have the storage under the Mass. Pike for efficient use of land.  That would get tricky on the alternative route.

After station 2, in the preferred alternative, both Green Line A and the Mass. Pike are lowering to ground level and turning.  The exact path is still being discussed by the Massachusetts Department of Transportation.  My idea is that stop 3 would be at the same level as the Mass. Pike with entry from above, and then Green Line A would go under the Mass. Pike to stop 4 at Cambridge Street and North Harvard Street.

The key to the alternative is that most of the route would be built under a new highway Harvard wants built in its construction area.  The portion of the alternative between Cambridge Street and North Harvard Street is intended to exactly correspond to the Harvard highway.  If I have gotten it wrong, please correct me.

This routing creates an awkward situation when the Mass. Pike and Green Line A enter the Harvard Medical School site.

Green Line A should have a stop for Cambridge Street, a main road.

On the preferred alternative, I put the stop at Cambridge Street and North Harvard.  I consider this location ideal for access to the Harvard Medical School facility, to the neighborhood and to a small amount of industry in the area.  There is adequate room to get Green Line A under the Mass. Pike before the two cross, so station 4 is a normal underground, non intrusive station.

On this alternative, the stop will be of less value to the neighborhood and industry, and much more value to Harvard’s non Medical School operation.

This starts the area where the advantages to the preferred route have to be considered against the greater inconvenience involved in constructing it.

After crossing Cambridge Street in the alternative, there should be adequate room to drop Green Line A so that it can proceed under Harvard’s New Highway to a simple underground station at Western Avenue, servicing that part of Harvard’s campus.  This station A3 would be just east of former WGBH buildings now owned by Harvard.

There is no avoiding the reality of the much greater inconvenience of building under North Harvard Street.  The very great advantage is that the route would be excellent for the neighborhood.

Either you are going to do a relatively simple route which overwhelmingly benefits Harvard or you are going to go through more bother and give the advantage in this area to the neighborhood.  I think the residents should be given this advantage.

I have suggested station 5 be at Franklin and North Harvard exactly to provide this advantage to the neighborhood.  It is a large intersection which can hold the station, and it has some retail in the area.  Plus the distance from station 5 to station 6 and 4 is about equal, what you want between transit stops.  Station 5 could also be put under Western Avenue.  That is Harvard’s world.  I would prefer the neighborhood’s world.

The big advantage from a transportation planning analysis of Western Avenue would be Buses 70 and 70A running down Western Avenue from Central Square, Cambridge to Waltham.  Bus transfer would be more convenient with the station at Western Avenue.

We are back in Harvard’s territory.

I consider it quite essential to end the difference between these routes once the preferred alternative gets to Harvard’s proposed new highway, and run both under North Harvard Street.

I have drawn an alternative west and north of the Harvard Stadium complex.  I am not certain whether the marked area gets around all of Harvard’s buildings.

The reality is that the alternative is much longer than going under North Harvard Street.  It also includes more distance under the Charles River.

Additionally, the station, A4, for Harvard Stadium and Harvard Business School, is farther south than would be ideal.

From an operational point of view, I hope the alternative route is not acceptable in this area.

Whichever route you go with, there will be a need for layover of trains to allow for the inability of Harvard Square station to support two tracks, except for alternative S3.  In the preferred alternative, that can be done in JFK park or under Eliot Street.  Otherwise, layover would have to be created under Eliot Street.