The Charles River White Geese in the Heat of Summer

The Charles River White Geese in the Heat of Summer 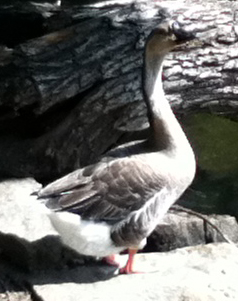 I have three stories pending.  I am doing them in the order that my personal work effort has progressed.

Today, I will show you photos of the Charles River White Geese from last Wednesday, August 19, 2015.

My next report will likely be of a report I am getting concerning the treatment of Canada Geese by the Department of Conservation and Recreation (the Dreaded DCR) or the City of Boston in the Muddy River Reservation.  This reservation is a mile or so south of the BU Bridge on the road which crosses the BU Bridge.  I hope I have the name correct.  The naming situation is similar to that of highways in the New England area, use as many different names as possible for the same entity.  That will confuse drivers and make the situation that much more dangerous.

After that, I anticipate I will report of the MassDOT meeting, also on Wednesday, which showed some fruitful sparks.  MassDOT has been the adult in the room with the Dreaded DCR and the City of Cambridge.  Among other things being discussed is introduced parkland on the Boston side of the Charles River.  One suggestion I will have is that MassDOT gets very specific to prevent more environmental irresponsibility by the Dreaded DCR.

The destructiveness of the Dreaded DCR is particularly apparent.

The Dreaded DCR then made things worse by allowing /encouraging use of this sensitive area for parking by railroad workers when parking was readily available next to Memorial Drive.  MassDOT did responsible parking implementing DCR plans for the BU Bridge work.  DCR lowered itself to its proudly vile level.

The Cambridge Conservation Commission objected to the destructive parking.  The DCR told the workers to back up beyond the tiny CCC jurisdiction.  The stones were dumped on the ground apparently gratuitously. 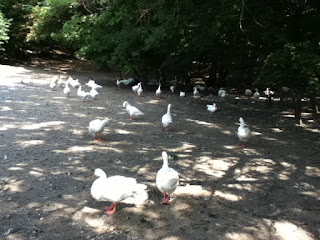 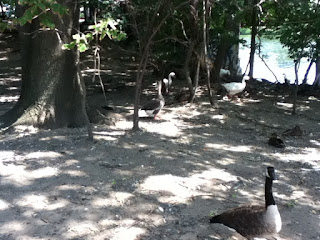 The first photo is in the area of the Dreaded DCR blessed destruction under a magnificent tree, an area which used to be heavily vegetated and beautiful.

The second photo includes area within the jurisdiction of the CCC, near the river.  Destruction had already been accomplished and the Dreaded DCR would not show any decency, of course.

Here are a couple of photos of the Charles River White Geese enjoying the water and apparently preparing to go in. 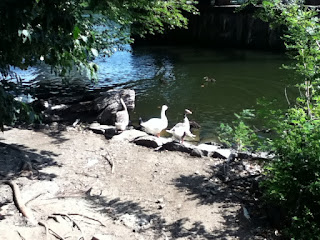 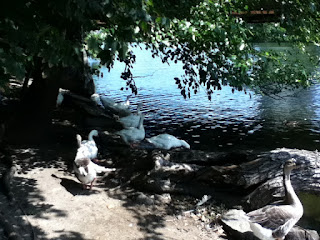 In the first photo, the goose with black markings, on the right, is a second / third generation goose descended either from Brown Beauty, the White China female with vestigial Brown China Markings who was the daughter of Bumpy, or from the Brown Toulouse who was abandoned in 2000 and found a mate in the gaggle.

Third from the right in the first photo and at the very right in the second photo is the male White China with vestigial Brown China markings, he was bred in 2005.

The two photos I led with above are enlargements of the following two photos, cropping into the featured birds.

Here is a solo photo of the brown male. 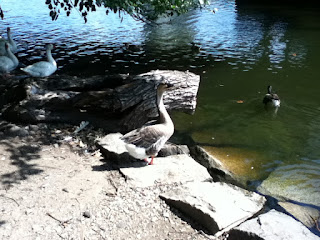 Here is a photo of the apparent survivor of two sibling Pekin Ducks abandoned in 2006. 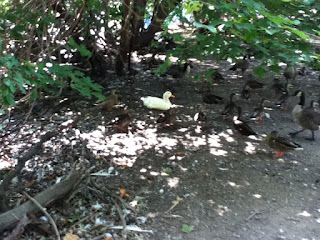 The Charles River White Ducks were found by a large group of us doing a memorial service on the fifth anniversary of the assassination of Bumpy, the then long time leader of the gaggle.

The Charles River White Ducks were so innocent that they thought dogs were their friends.  I saved one of them that day by kicking a dog who had his teeth on the neck of one of them.

Here is a photo from 2008, courtesy of Phil Barber, showing the Charles River White Ducks, Daphney and Mandrake. 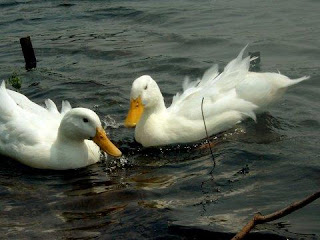 I have a Phil Barber photo of them which I looked for and have not found.  It shows the proud pair with their then brood on the Charles River.  No member of the brood survived.  Our guess has been that the babies were prey to hawks, and the parents, not having been raised in the wild, did not have the skills to know how to defend / hide the babies from threats.

And here is a photo of the same area as above from the BU Bridge, in the manner of my last group of photos. 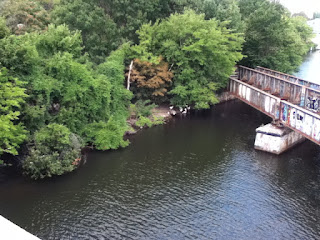 Here are examples of nature healing the outrage created by the Dreaded DCR. 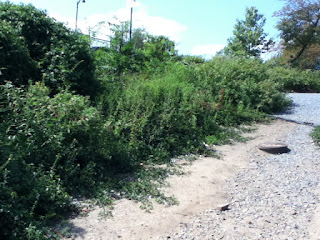 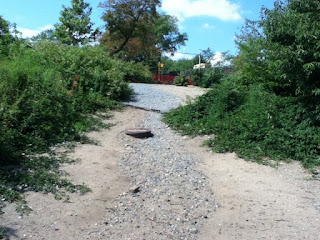 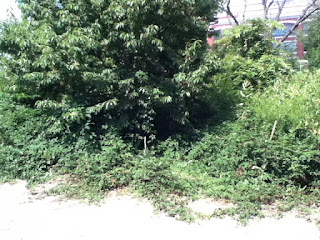 The gray line is a plastic wall that separated the BU Bridge work / “replacement” area from the area destroyed by the Charles River "Conservancy."  The large bushes are native bushes remaining after the vile attacks.  The vegetation on the ground is runners from the undestroyed native vegetation.  Nature is healing itself.

And all those stones are the Dreaded DCR / its accomplices bragging about their rottenness.
Posted by Friends of the White Geese at 5:12 PM