1. Introduction.
2. Destruction of the Wild Area, Stalking Horse for Mass. Pike Off Ramp to Cambridge.
3. The Architects’ Proposal.
4. Related matters.

Last night, September 18, 2015, the Massachusetts Department of Transportation team working on the rebuilding of I90 (Massachusetts Turnpike) on the Boston side of the Charles River held a meeting of its advisory committee.

The meeting was introduced as the last meeting to be conducted before MassDOT reaches a firm position on its desired parameters for the construction work.

There were two extensive speakers.

Here is my marked up satellite photo from the regional transit agency showing the key area targeted by the destructive duo. 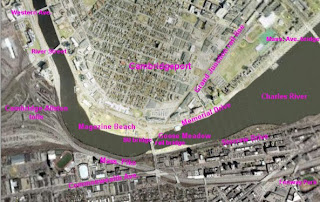 Harvard owns pretty much all of the land covered by the MassDOT study.  Harvard's ownership is subordinate to use for transportation purposes.

Harvard bought its holdings several months after the local transportation agency, the MBTA released a report saying that the railroad bridge under the BU Bridge could be converted to an off ramp from the Mass. Pike to Cambridge.

After issuing the report, the MBTA “realized” that the costs of the project would be too much to pay, given the supposed purpose they were researching, Express Bus service from the Newton Suburb to Cambridgeport / Kendall Square.  The MBTA came to this “realization” with a straight face, inasmuch as the MBTA was talking about, probably, two or three express buses in in the morning and two or three back in the evening.  It does not take an abacus to calculate that such construction would not be justified by two or three round trips of one express bus Monday through Friday.

A lot of the environmental outrages being inflicted on the Cambridge side can be explained as readying Cambridge to received traffic from the Mass. Pike via such a bridge.


2. Destruction of the Wild Area, Stalking Horse for Mass. Pike Off Ramp to Cambridge.

He described his proposal as providing access from the main BU Campus to BU’s Cambridge Boathouse east of the Wild Area, which in turn is east of the Grand Junction Railroad Bridge.

English translation: he wants to destroy the Wild Area between the Grand Junction railroad bridge and the BU Cambridge Boathouse.

Here is a view of the access to the railroad bridge on the Boston side.  The southern edge of the bridge is the metal pieces showing at the bottom.  If you look closely straight ahead, you will see a green sign above the Mass. Pike.

This highway proposal would cross the bridge running from the Mass. Pike and turn and run (left, behind the camera) through the Wild Area to the BU Cambridge Boathouse. 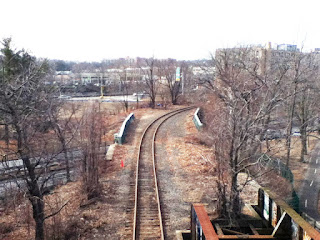 One of the first happenings after the falsely named Charles River “Conservancy” starting destroying the environment for the Department of Conservation and Recreation was the destruction of all ground vegetation in the Wild Area.

One of the second happenings after the Charles River "Conservancy" started the environmental destruction for the DCR was the destruction of most of the ground vegetation in the Destroyed Nesting Area west of the Grand Junction railroad bridge.

Omitted from destruction in the Destroyed Nesting Area was that area in and near the area which the DCR wanted to destroy as part of the rebuilding of the BU Bridge.

At least one depiction of the off ramp from Mass. Pike to Cambridge showed an access ramp going through the Wild Area.  It is no coincidence that the supposed bike highway would connect to the BU Boathouse through exactly that path.  Such a route would create most of the off ramp desired for the ramp from the Mass. Pike.

Here are the DCR plans for destruction of the Wild Area as part of the DCR’s proposed destruction of hundreds of trees between the BU and the Longfellow Bridge, the second bridge east of the BU Bridge. 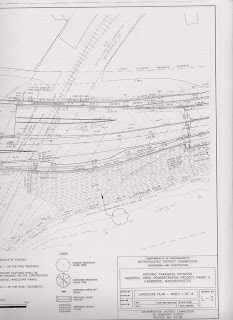 The impact of the DCR plans is the same in the two versions of the plans not kept secret, plans dated 2003 and 2009.  The current game is maximum secrecy, maximum damage. $20 million was bless by the legislature in 2014.

The DCR plans show exactly one tree not being destroyed.  They do not deign to mention anything else.  Dishonesty is the norm dealing with these people.

Here is the BU satellite photo showing the Wild Area published in 2014. 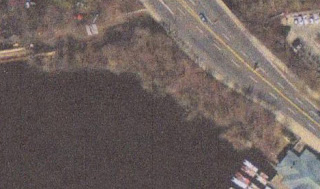 Here are photos by me of the Wild Area from the BU Bridge taken last winter and a week or so ago. 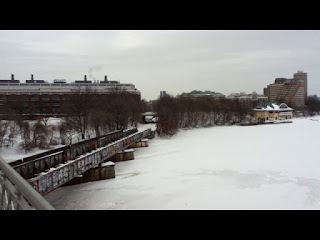 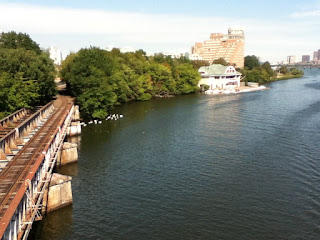 The small white figures in the immediately above photo are members of the gaggle of the Charles River White Geese. 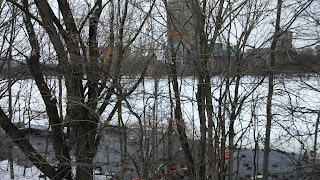 All trees between the Grand Junction railroad and the yellow BU Boathouse would be destroyed but one.

MassDOT’s most recently announced plan would rebuild the Mass. Pike in the narrow part of the photo area of the first photo, between the BU Bridge and Harvard’s property to the left.

MassDOT’s proposal is responsible.  Most of the road in this area is on stilts, starting at about the Grand Junction and going west.  They would tear it down and rebuild it pretty much in place.  Part of the adjoining Soldiers’ Field Road would be moved under the Mass. Pike to allow minor widening, with all of the widening toward Soldiers’ Field Road and the Charles River.

The Architect proposal would rebuild it on the ground with extensive parts of their related items built at least in part on a new retaining wall which would destroy the animal habitat on the edge of the river and any inconvenient trees.  They would probably cantilever above the river.

The Architect giving the presentation, among other examples, show irresponsibly built parts of the river roads abutting the Charles River as good examples of what he was proposing.

His argument basically was that they had done this sort of thing before, why not again?

I submitted written comments which were an expansion of my most recent report, posted at http://charlesriverwhitegeeseblog.blogspot.com/2015/09/charles-river-massdot-plan-for-mass.html.

There were significant changes, but the entire thing really is too big for one report.  I will follow up with portions.

Clearly these presentations were irresponsible.

The pitch they are giving, in addition to supposed glorious ideas, was allegations of cost savings.

This could be dangerous.

We have a commendable agency, MassDOT, whose responsibilities were expanded by the legislature by giving MassDOT major responsibilities of the now deceased Metropolitan District Commission.  The rest of the MDC was folded into the DCR.

The folding of the MDC into the DCR was a waste of time.  The MDC lives without meaningful change except in name.  It is silly to make a distinction between MDC before and DCR after.  They are both vile and very compatible with the destructive City of Cambridge, MA.

And we have a ramping up of DCR / Cambridge type fight for destruction on the Charles River.

Posted by Friends of the White Geese at 5:25 PM