This is an excellent example of an environmental creation of the Department of Conservation and Recreation working with the City of Cambridge.  You know them, they are the pair who just destroyed hundreds of trees between this location (at the BU Bridge) and the Longfellow Bridge, with the usual lovely promises. 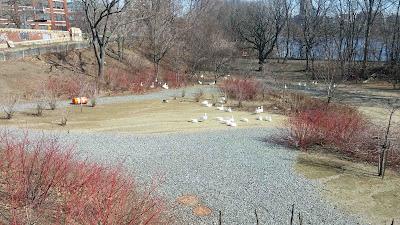 In March 2000, the Charles River White Geese returned to their Destroyed Nesting Area after it had been destroyed for the first time, by Boston University.

BU lied for six months that BU had not done it, until they were condemned for the destruction by the Cambridge Conservation Commission.  Then BU started bragging.

The DNA then was a lot better than it is now.

Here it was today.  In normal years, the Charles River White Geese would be returning from the Magazine Beach playing fields, to have a nesting season.  Now they have no place else to go.  The Magazine Beach, playing fields to the west, their home for most of the last 36 years, is barred to them by a bizarre 16 foot high wall of introduced vegetation.  To the east is the former lush riverbank which was destroyed by the DCR and Cambridge in January, with booms blocking access.

The Destroyed Nesting Area has since gone through a series of outrages.  The falsely named Charles River Conservancy destroyed as much ground vegetation as it could outside of the area which had been set aside by the Dept. of Conservation and Recreation for work on the BU Bridge.  The CRC destruction is most of the area above the line of vegetation to the right.

Irresponsible railroad workers, with the blessing of the DCR, used the area that the CRC had destroyed for a parking lot when parking was readily available under and next to the Memorial Drive overpass.  They added to the destruction, plus dumped crush stone on pristine land.

The blue at the top right is the Charles River.  The black line immediately below the Charles River is the Grand Junction railroad track.  The hillside below the track was lush with vegetation until it was destroyed by the CRC and made worse by the railroad workers.

The grouping of geese below that hillside is in the area which has been the favorite of the Charles River White Geese in spite of the destructiveness.  Some green moss disrupts the artificially created dirt habitat. 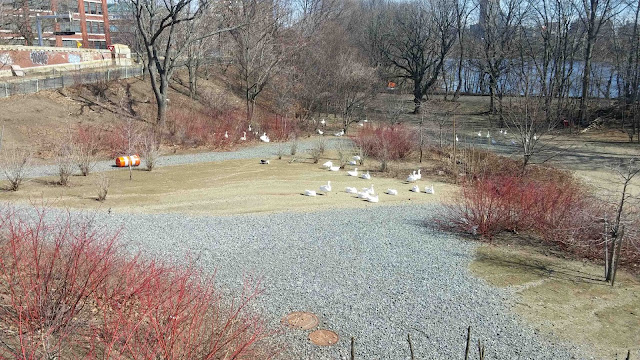 The rest of the area was destroyed by the DCR as part of the DCR’s overkill in remodeling of the BU Bridge.  The DCR got it going and the legislature fired the DCR’s predecessor, the Metropolitan District Commission.  The Massachusetts Department of Transportation took over the bridges and the BU Bridge project.  The planners of the MDC went to the DCR along with the riverbanks.  The legislature was trying to destroy the MDC, but the transfer of the planners and managers made it just a name change for the riverbanks.

It was necessary to destroy up to a 100 feet from the BU Bridge for the work on the BU Bridge, and the photo is taken from the BU Bridge.  The DCR needlessly, as usual, destroyed most of the area in the photo.  The area to the right is the 100 foot line.  The destruction went into the good habitat through the vegetation in the middle.  The adjacent hillside was destroyed as part of the work.


The orange barrel is part of a more recent outrage.  Supposedly this area is a public park.  The trouble was that, when BU tried to turn it into a campus / public park, nobody used the public park except the animals whose homes BU destroyed.

It came to the attention of the DCR that the Charles River White Geese had the nerve still to eat.  They would walk, very carefully, across the on ramp to grass under the overpass.  They would gather on the sidewalk next to the ramp and wait for an opening in traffic.  The trouble was that, after being highly responsible jaywalkers, once they started crossing, they behaved liked geese.  Many of them dawdled.  The commuters, like normal decent humans, loved them.  They happily waited while the geese got around to crossing the on ramp.

The DCR does not want the Charles River White Geese feeding.  They, not the commuters, objected to the Charles River White Geese crossing the on ramp.  So the DCR blocked off the entrance illegally created by BU to the left of the picture.  And the DCR put the lie to the claims that this is a public park because the public is forced to use a staircase beyond the bare land which used to be a heavily vegetated hillside.

The hillside was destroyed as part of the BU Bridge project by the DCR plans.  There was no attempt to recreate the grasses and native vegetation which were destroyed.  Fancy introduced stuff which would turn into a thick impenetrable wall was planted.  Most of the introduced “improvements” died.

There were a good number of Charles River White Geese in the introduced vegetation at the foot of the hillside which has not died.

All the crushed stone is other DCR “improvements”.  There are two highways from the now blocked entrance toward either end of the undestroyed area under the railroad tracks.

The big mess near the camera was intended as a parking area for workers, and there is a work area / door under the BU Bridge.

The triangular piece of dirt was created by the DCR’s BU Bridge renovation plans, totally unnecessary destruction.  The bushes to the left in that triangle were planted throughout the triangle.  Their death is a mixed blessing because they, like the hillside bushes, were designed to be impenetrable.  Green ground coloration is moss.

The vegetation at the bottom left carries to the now block entrance which was illegally created by Boston University.

To the right of the camera is an apparently deliberate bare nearly 100 foot worker access strip against the BU Bridge.  More of the introduced vegetation follows it, and is paralleled by native, thicker vegetation.

You can see a subgroup of the Charles River White Geese in the brown dirt triangle.  There were other, smaller numbers elsewhere in the Destroyed Nesting Area, on the rail area, and in the Charles River.

The orange figure to the left of the Charles River is in the Wild Area, which is doomed to be totally destroyed except for one tree according my understand of lying plans of the DCR.

I have a comparable photo from today of the Charles River and that portion of the Destroyed Nesting Area.  I have talked too long for this report.

Posted by Friends of the White Geese at 3:19 PM