This report is the latter half of a pair with my report on my letter to the Secretary / CEO of the Massachusetts Department of Transportation.  Dominant in that letter was my objection to a con game which was the basis of a letter from the Cambridge City Council to her.  The letter is posted at http://charlesriverwhitegeeseblog.blogspot.com/2017/06/charles-river-con-game-fights-for.html.

The letter I am transmitting here was used as an attachment to that letter to give the new Cambridge City Manager a feel for who can be trusted on development matters.

I have hesitation reporting this letter because I respect and have high hopes for the new City Manager.  In particular, I suggested in my letter that he keep the contents confidential until he had a chance to test the Development Department to see if the outrageous lie they had told for 21 years was still being claimed to be “reality” 26 years after it became an outrageous lie.

It is well written.  The purpose for suggesting confidentiality has long since passed.

So I used the letter for the purpose for which it was originally used, and I am going public for the same purpose.

A technical matter:   This letter was created in WordPerfect and saved in PDF.  I cannot find the WordPerfect original, so I have used WordPerfect to translate the PDF back to WordPerfect.  I think it is clean.  If I missed some sort of stupid translation, I apologize.

Congratulations on your appointment and welcome to a very strange situation.

Enclosed are three letters from me individually and as chair of Friends of the White Geese to you and to the City Council.

Last night, you were scheduled to attend a meeting of a group in Cambridgeport which calls itself a “neighborhood association.” It has a very telling rule on its Listserv. People are CENSORED from SAYING NEGATIVE THINGS ABOUT THE CITY OF CAMBRIDGE AND CAMBRIDGE’S FRIENDS NO MATTER HOW VALID THE COMMENT. More blatant control is exercised in control of the entity’s agenda and similar tactics.

This bizarre situation is part of a pattern which dates back to the return of James Leo Sullivan to the City Manager position in 1974. He had been fired in the late 60s and declared, as one of his major goals, that he would create a system of “neighborhood associations.” Last night you saw the most recent incarnation of what is presented to the public as “neighborhood associations.”

“Neighborhood Associations” / “protective groups” have had an amazing tendency to appear when Cambridge and friends are proposing destructive actions. Groups like this have had an incredible tendency to achieve the opposite of what they claim to stand for. At least for a while, no “neighborhood association” was recognized unless it had been blessed by the City Manager / Development Department.

Among other things, for environmental purposes, I have had a hand in the writing of more of the Cambridge Zoning Ordinance than anybody else not employed by the City of Cambridge. My biggest problem, too often, has been people who control these “neighborhood associations.” When I have won, and the victories have been in the majority, there have been a lot of instances in which the City Council has taken my side and stood up to city appointees including the Planning Board, and to friends of the Development Department.

I think it is rather certain that the current effort to take zoning away from the voters in the name of a “Master Plan” wipes out zoning which the City Council put in place over the wishes of the City Manager and the wishes of the always present “activists.” The corrupt tactics which have been used by the core group of that group which you met last night are only part of the control techniques of supposed protective groups by which a lot of destruction has occurred while they loudly proclaimed that they are a protective entity. They tell people not to look at destruction. They even tell people to support it, claiming “you can’t win.”

The technical term is “company union.”

War stories including the very terrible achievements and goals of the falsely named group you met least night and similar groups would take too much time. Communicating part of my record is more useful.

Among other things, I have victories at Alewife, in the Harvard Law School area, in the Cambridge Hospital area both between the hospitals and in the neighborhood south of the hospitals, in the Harvard Houses area, in Kerry Corner, at Guffey Park, and in about 85% of Mass. Ave. and side streets between Harvard and Central Square, including the former Inn at Harvard.

Mass. Ave. included three major zoning petitions and participation / drafting in smaller petitions. Most won. The biggest shortcomings resulted from corrupt tactics by people such as tactics of the folks who control the group you saw last night.

I wrote the first three neighborhood zoning petitions for the area in Cambridgeport which has been developed by MIT.

It would be a horrible tome to attempt to present all these oddities. I direct you to one very major flat out lie ON A STATE / REGIONAL MATTER promulgated by the Development Department and by ALL of the visible and SUPPOSEDLY EXPERT and “independent” “LEADERS” in this collection of “protective” groups. Their supposed understanding of reality directly conflicts with REALITY AS SEEN BY PEOPLE OUTSIDE CAMBRIDGE INFLUENCE.

MOST IMPORTANTLY, THE VERSION OF REALITY PUT OUT BY CAMBRIDGE AND COMPANY DIRECTLY CONFLICTS WITH THE VERSION OF REALITY PUT OUT BY THE RESPONSIBLE PEOPLE IN STATE GOVERNMENT WHOSE POSITION, OVER MANY YEARS, HAS BEEN FALSELY REPORTED BY THE DEVELOPMENT DEPT.
This major, outrageous situation ran from 1991 to AT LEAST 2012. The reason my understanding ends at 2012 is that that was the last time I checked. It is highly certain that this key, highly provable and very major FLAT OUT LIE continues to exist.

There is a mass transit proposal which has been under consideration since 1985 called the Urban Ring. Most recently it has been warped into a higher priority for bus routes, but, as recently as, I believe, 2015, the City Manager reaffirmed Cambridge’s interest in the rapid transit rail aspects in a comment during the environmental review of the South Station “Expansion.” The South Station Expansion, in turn, has fine print destructive to eastern Cambridge, when you understand a key omission.

Here are Cambridge and Boston maps of the BU Bridge Crossing from the MBTA. This is the one which the Development Department and influenced “activists” have spent a minimum of 21 years lying is the only alternative under consideration. 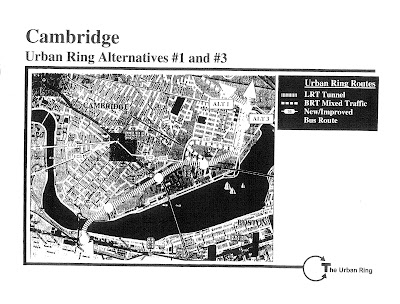 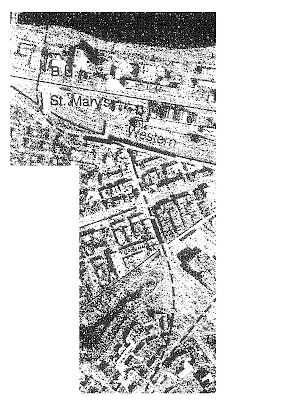 Here are Cambridge and Boston maps of the Kenmore Crossing from the MBTA. This is the Charles River Crossing option the Development Dept. and influenced “activists” have spent a minimum of 21 years denying exists or has ever existed as an option. 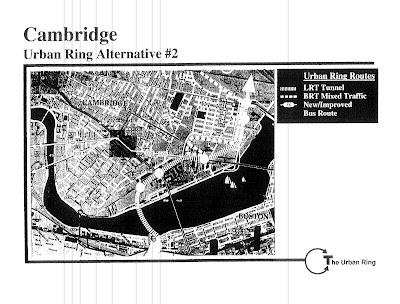 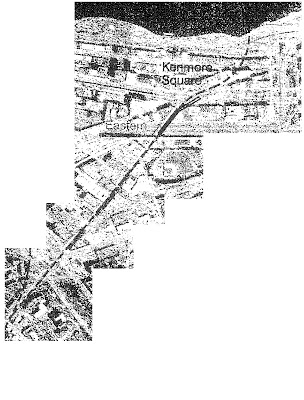 There are three keys in this situation.

A third key difference is Yawkey Station on the Commuter Rail, across from Fenway Park. The BU Bridge Crossing would move Yawkey about .5 miles, to Mountfort and St. Mary’s, about a block from Boston University’s Marsh Chapel.

The Kenmore Crossing makes Yawkey part of a super station in which Yawkey connects to an Orange Line quality Urban Ring station under the Brookline Avenue Bridge over the Mass. Pike and from there to the existing Kenmore Station on the Green Line. Above, on the right below “Kenmore Square,” Yawkey and Urban Ring stations show as right-left and diagonal black rectangles.

There would be direct connections among (a) the Urban Ring (direct Orange Line quality service to Harvard Medical Area and Downtown Boston through Ruggles Station, plus direct service to Cambridge (MIT, Kendall, East Cambridge) and to the northern end of the Orange Line), (b) the Commuter Rail to Worcester / South Station, and to ( c ) the Green Line B, C and D branches, plus Downtown / Back Bay , and, of course, (d) excellent access to Fenway Park. The Orange Line connection through Ruggles and Charlestown should be accomplished in a manner similar to the split into the two Red Line branches at JFK Station.

The BU Bridge Green Line quality crossing is far inferior. It connects to Commuter Rail and Green Line B (Boston College) from an Urban Ring station at Mountfort and St. Mary’s. Green Line B access would involve a tunnel and a walk in the elements from the south sidewalk of Comm. Ave. It would connect to Green Lines C (Cleveland Circle) and D (Riverside) through an Urban Ring station under Park Drive between the C and D lines. There would be either a new station or a walk of two blocks at Beacon Street to connect with C. It would provide transfers to the Orange Line but could not provide direct rapid transit rail service to Downtown Boston or to the northern reaches of the Orange Line.

The legislature has since spent construction money upgrading Yawkey Station in place. This makes a Yawkey move to Mountfort and St. Mary’s (required by the BU Bridge Crossing) that much more silly. This station upgrade could be related to a conversation in which I informed that developer of the possible move of Yawkey under the Cambridge / BU Bridge alternative.

Here are photos of the upgraded Yawkey Station which would have to be abandoned if the inferior crossing pushed by the Development Department were implemented, with harm, at minimum, to the major project going in above the station. 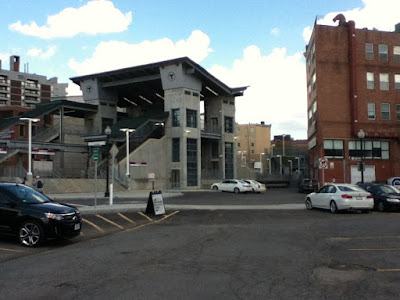 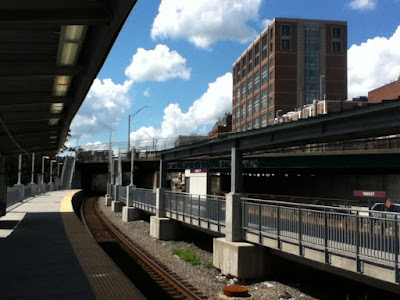 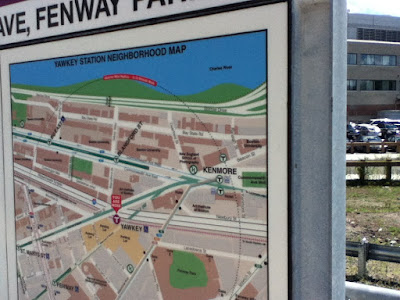 I recommend that you keep this communication confidential UNTIL YOU HAVE DISCUSSED THE URBAN RING RAPID TRANSIT PROPOSAL WITH THE DEVELOPMENT DEPARTMENT, and that you NOT INITIALLY TELL THEM WHAT I HAVE SAID ABOVE. If you do as I recommend, there is a good possibility that you will get a repeat of the outright and bizarre lie that was put out by the Development Department and its influenced “expert” “activists” for a minimum of 21 years, 25 years if it this bizarre lie is still the Development Department’s official (and blatantly false) view of reality.

An alternative method of proving this outrageous lie can be found in the files on the zoning changes in the 2000s of areas around the Grand Junction near the Charles River. These changes, in writing, were based on the flat out lie that the Kenmore Crossing, an official MBTA Urban Ring Rail Charles River Crossing Option for more than a decade at that time, did not exist.

But this nonsense is not isolated. It is simply that this nonsense is readily provable. Hundreds of trees were just destroyed based on lies of omission and bureaucratic dirty tricks, with the destruction of another 54 being fought for with yet more misbehavior.