Report from Alewife: The Swans Live?

I have given you two reports from Phil Barber about a swan nest he observed at Alewife.  The second report was ominous.

Here is the third report.  It is encouraging.

Hi Bob, I bear happier tiding from Alewife today [May 31]. There is another nest on the small pond where I reported the loss of a swan nest the other week. There appear to be two eggs in it though these might be shadows.

I hope my fears about the depredation of the turtle (or whatever agent) were misplaced. I don’t know if it’s the same pair though I would think it would be. The male appears to be the same one I observed looking so dejected. I notice both their necks are discolored from plunging into the waters of Alewife. I once saw swans in Salem harbor with ‘bathtub rings’ around them from the polluted water. Anyway I’ll keep an eye on them as I get out that way relatively often, and keep you posted. 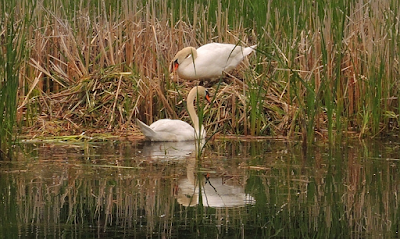 Posted by Friends of the White Geese at 5:11 PM