In these reports, I have avoided getting into internal politics in the City of Cambridge.

Unfortunately, sickness of the internal political situation drives the situation on the Charles River.

It was thus a pleasure last Monday, June 4, to see a very impressive turnout at the Cambridge City Council concerning plans to destroy yet more parkland.

It gets even better because I lived in the neighborhood for seven years and wrote / provided technical assistance to two zoning changes in the area.

The public is given a limited amount of time, three minutes per person to comment on matters before the City Council.  Public comment ran more than two hours.

What was extremely nice to me was hearing opponents of the destruction commenting that there were folks on the destruction side who looked like their strings were being pulled.

I followed up with a letter to the City Council that placed those comments in context with the performance of one of the self proclaimed City Council “environmentalists” at a meeting of the fake group which is fighting for destruction of the Charles River.

My victories in the area are part of the city zoning map.

Here is the relevant part of the zoning map. 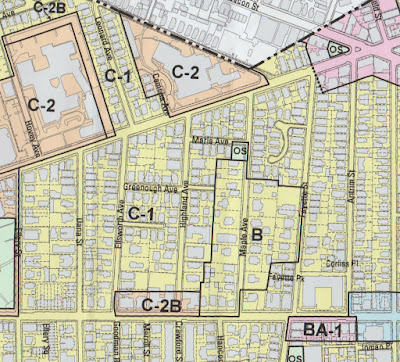 Vellucci Park is in Inman Square, Cambridge.  The square proper is the elongated X at the upper right of the map.  The area marked OS between the two streets which are the left part of the X is Vellucci Park.

Slightly to the right and across the street from this C-1 area is Highland Avenue.  I lived on the left slightly below the cross street.

The BIG area marked B is the next residential zoning district below Residence C-1.  It was created as a result of the Maple Avenue / Fayette Street zoning petition which I wrote and advised.  Above the B area is another OS area, Marie Avenue Park.

Marie Avenue Park was the first neighborhood area zoned for Open Space in Cambridge.  My idea.

The grey area at the top of the map is Somerville, MA.  Several Somerville residents testified last Monday.

For two and a half years, I commuted by bicycle from here to Boston University Law in all kinds of weather.  It was over a mile.  I commuted over the BU Bridge to BU Law before the beginning of the residence of the Charles River White Geese there.  BU Law is visible across the Charles River in a lot of photos of the goose habitat.

In the letter, I mention Sarah Mae Berman, a former School Committee member who supported the Maple Avenue downzoning.  She owns property in the B area.  I know which property it is, but this blog is read in more than 100 countries.  Identifying her exact residence to such a potentially wide audience would do nothing to further the value of this report, and would be indiscrete.

I lived at 67 Highland Avenue, within view of Cambridge Hospital, for seven years. .

I wrote / provided major technical assistance to the Maple Avenue / Fayette Street downzoning which created the Residence B district in that area.  That zoning change made the Marie Avenue Park have the first neighborhood level open space zoning, and included the home of at least one of the speakers Monday night, Sarah Mae Berman.  Sarah Mae consented to that change without being an activist in the creation of the change.

Although I am not aware of anybody present Monday night who was on my side with regard to that area, I also wrote / provided major technical assistance to the downzoning of the Leonard Avenue area.  This change converted to Residence C-1 a C-2 strip which formerly connected Cambridge Hospital and Youville Hospital on the north side of Cambridge Street.  Our downzoning also created a C-2B buffer in the Youville Hospital property to protect its neighbors.

I was extremely pleased at the astute comments on June 4 of a number of the neighbors who rather clearly recognized that  “protectors” active in the effort should, in reality, be considered controlled by the Cambridge Development Department.

People who work to protect Cambridge are commonly descended upon by supposed ”protectors” who are impossible to distinguish from robots of the Cambridge Development Department.

I recall a City Councilor who recently spoke to a fake protective group fighting for destruction on the Charles River.  She commented in praise of her idea of “process.”  She refused to discuss the 56 mostly excellent trees she voted to destroy at Magazine Beach, but she happily talked of “process.”  Her idea of “process” was very clearly one of going to the Cambridge Development Department and asking them whom to talk to.

The CDD commonly refers people to, it is very clear, folks who parrot the CDD, folks who work to  achieve very terrible goals of the CDD.

English translation, this councilor considers going to the destructive CDD to find out whom to listen to as correct “process” in evaluating CDD outrages.  Could be lack of understanding of reality.  Could be deliberate.  If deliberate, the use of “process” with regard to such behavior strikes me as fraud on the voter.

Well intentioned folks are besieged by individuals, commonly with bad records, who tell responsible citizens either to rely on fake protective groups or to directly rely on the very destructive CDD.

A still partial but more detailed communication of my record to the City Council is posted by the City Clerk at http://cambridgema.iqm2.com/Citizens/FileOpen.aspx?Type=1&ID=1928&Inline=True, pages 99 to 103.  This partial listing of my record includes very destructive activities of such fake protectors.  Such entities have, commonly, been the biggest problem in my many responsible activities defending the City of Cambridge.

Once again, there were a lot of good, very astute people speaking in defense of Vellucci Park.  They must take care, and I think they will, to avoid being infiltrated by and destroyed by this tiny, very destructive, and well organized bunch of people.

PS: I did a commentary / interview show on The Cambridge Environment on CCTV [ed: Cambridge Community Television, Cambridge’s public access broadcaster] for 22 years.  The end of that effort has allowed me the very great amount of time needed to more directly communicate with the Cambridge City Council.

During my 22 years on CCTV, there was only one time I had as my guest on my show a then sitting member of the Cambridge City Council.  That person was Al Vellucci. [ed: the namesake of the tentatively doomed park]

Atch: Zoning map of mentioned areas [ed. above in this publication.]

I think I have photos of pretty much all of these areas.

This blog is about the Charles River, its animals, its trees, its water, and its vegetation.  The relevant part of this hearing is the recognition by protectors that “activists” opposing them include folks who are being told what they believe.  Another part of the same filth which along the Charles River is fighting for, AND HAS ACHIEVED, major destruction on and into the Charles River.

I think the map makes my point adequately.
Posted by Friends of the White Geese at 3:35 PM