The following is close to the current draft of a letter being sent to the Cambridge, MA, USA City Council.  A lot of their members claim to be environmental saints.  They are not telling the truth.

We must apologize that we have concentrated in the truly heinous plans the , MA, USA, City Council and the Massachusetts Department of Conservation and Recreation  support at Magazine Beach on the Charles River and on which they are playing funding games to tell their constituents to ignore the major praise for destruction there.

During the past few days, the Cambridge City Council and the DCR started truly heinous destruction which the bunch of then intend to inflict on Magazine Beach, with the PAID SUPPORT AND ASSISTANCE of the Poisoner of the Charles River..

Here is the view they just destroyed.  THEY HAVE DESTROYED ALL VEGETATION SEEN IN THIS PHOTO.  This is the main entrance to Magazine Beach, the last turn in  the pedestrian walkway over Memorial Drive.  This photo is cropped from page 22 of our City Council letter of June 6, 2017 objecting to their outrages which are now accelerating.  Our letter is posted at http://focrwg.com/agenda1.html. 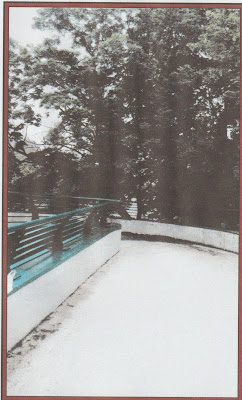 We note letters from the Poisoner of the Charles River and related in the City Council communications for October 21, 2019.  The source of their praise AND THE VIEW DESTROYED FROM THE PEDESTRIAN WALKWAY to Magazine Beach show exactly what the SAPLINGS Cambridge City Council is trying to con people into praising are worth as “replacements” for this excellence they should not destroy.  And this is just the latest of their outrages.

B. Before and After of THIS PART OF THE OUTRAGE.

Here are before and after pictures from the ground level by Phil Barber.  The X’s identify the before and after photos of the DCR and Cambridge CREATED outrage.  The left tree in the before picture DOMINATED the view as people approach this turn on the Magazine Beach side of the Memorial Drive Pedestrian Bridge. 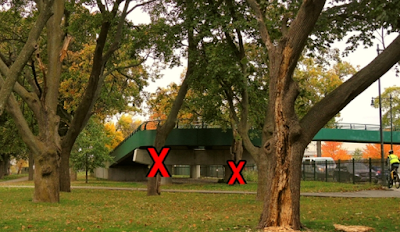 After pictures are as follows:

The above photo is of the remnants of the tree to the left in the before picture teken from the ground.

Until they destroyed these excellent trees, this view was impossible from the pedestrian overpass from which this after photo was rather clearly taken.

This tree, UNTIL THEY DESTROYED IT, was the right tree in the before picture taken from the ground. 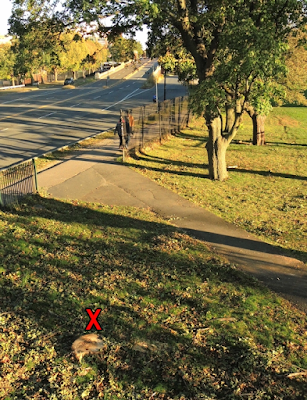 Look at the excellence of the undestroyed trees, especially as viewed from the overpass in the first photo.  Most of the vegetation is from the left tree looking from this side, but this tree is visible to the left looking from that opposite side.

Phil did a much better job of photographing them through the area of destruction than we did on pages 21 and 22 of the June 6, 2016 letter, or will the better view of the balance of the grove from the overpass be used as part of their attempt to get undeserved praises at outrages?

C. The Plans for THIS PART OF THE OUTRAGE.

And here are the destruction plans filed with the Cambridge Conservation Commission and included by me on page 19 of the June 6, 2017 letter which is posted on the Charles River White Geese internet page at http://focrwg.com/agenda1.html.  It was subsequently fully posted again, and has repeatedly been cited.

If the reader is having trouble understanding these plans, so did we.  The reality, however, is that the DCR benefits from having unreadable plans.  People have difficulty griping if they cannot figure out or communicate the plans.

In the black and white, THE OFFICIAL, filing, a major tree shows being destroyed just below the path.  That is the left tree in Phil Barber’s before picture.  NO ADJACENT DESTRUCTION IS SHOWN, and a lot of trees show.  The color version, THE UNOFFICIAL CON GAME, includes the right tree being destroyed.  Remember the secret definition of the colored lines: The DCR fraud claims a right to destroy ANY AND ALL TREES which have passed the peak of their beauty, NO MATTER HOW EXCELLENT.

D. The Context for THIS PART OF THE OUTRAGE. 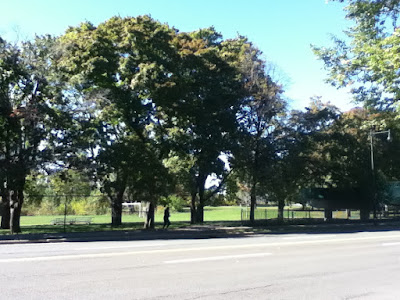 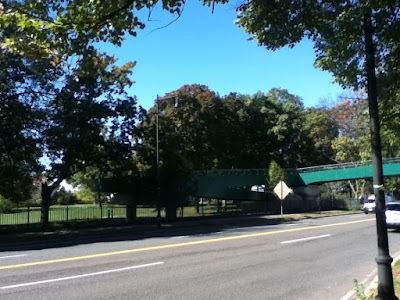 From the Magazine Beach side.  The walkway visible in the second photo from Memorial Drive is visible on the left in this photo.  Cambridge's Morse School is visible across Memorial Drive.  View of the bridge is SO FAR blocked by the trees 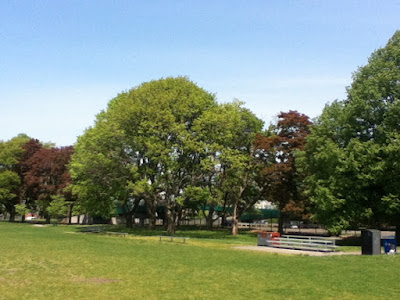 Please note from the Destruction Plans above, however, that Cambridge and the DCR have more excellent trees to destroy even in this excellent grove.  Additionally, please note that wanton destruction commonly exceed publicly announced plans.

The strongest thing the Cambridge City Council has going for it is the constant INCORRECT belief, “They would never stoop so low.”

E. Further parts of the OUTRAGE.

Destruction, construction and planning as stated in our letter of June 6, 2017 as posted at http://focrwg.com/agenda1.html, and any and all subsequent expansions of these plans or related actions should be terminated.

The following are only the most extreme samples.

Abuse of resident animals either on Magazine Beach or on other parts of the Charles River or areas abutting the Charles River, including but not limited to the installation f barriers to access by whatever name.

Some of the worst targets for THEIR DESTRUCTION are:

The magnificent grove overhanging the playing fields at the middle of its western edge. 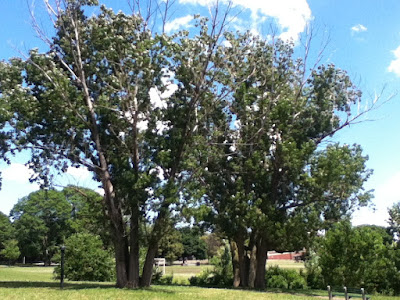 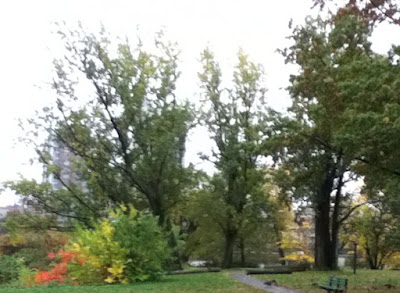 The magnificent park in the middle of Magazine Beach of which 30 or more trees are doomed. 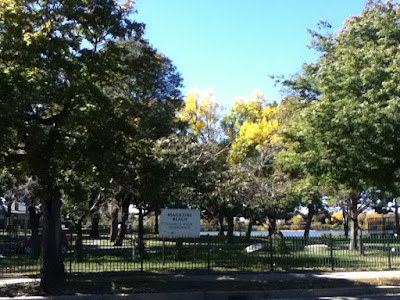 The MicroCenter Grove west of the Magazine Beach Swimming Pool.

The Cambridge City Council has already, as secretly as possible, awarded a contract to the Charles River Poisoner for early planning to lead to the destruction of these six magnificent trees. The Charles River is in the background.  The destroyers want to move the parking lot on top of the grove. 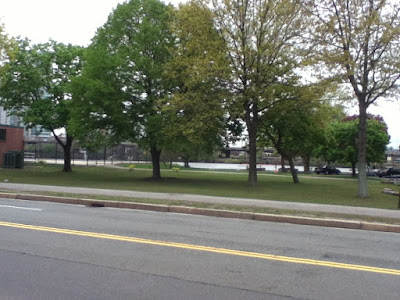 Some of the trees in this latter photo are not part of the six doomed and excellent trees.

A. Terminate any and all contracts and / or funding controlled by the City of Cambridge with regard to Construction or Destruction on or adjacent to Memorial Drive, Magazine Beach, the Charles River or land areas associated with the Charles River, with the Department of Conservation and Recreation, and any and all Government Agency, Contractors or others, to include but not limited to the Poisoner of the Charles River.

E. On an Emergency Basis, obtain Legislative approval to strip all activities and / or funding from the Department of Conservation and Recreation in Cambridge and / or the Charles River, and to transfer same to the Massachusetts Department of Transportation.

Posted by Friends of the White Geese at 4:04 PM