Phil Barber let me know about the following report from boston.com: on June 25.

Keep your dogs out of the Charles River; the toxic algae is back again.

The Charles River Watershed Association issued a public health advisory Thursday afternoon for cyanobacteria blooms, the bright blue-green algae that is potentially lethal for pets, found between the Mass. Ave Bridge and the Museum of Science.

“Do not let your dogs swim in this area, cyanobacteria blooms are toxic to pets,” the conservation group tweeted.”

First of all, I seriously challenge the credibility of this group since it WILL NOT RECOGNIZE THE BIGGEST DESTROYERS ON THE CHARLES RIVER, but there is value, in once again, noticing what they are supposedly noticing.  The report is dated June 25, 2020.  It is posted at https://www.boston.com/news/local-news/2020/06/25/charles-river-toxic-algae.

Phil has provided the following photos from the destroyed boat dock where the Cambridge City Council and the Department of Conservation and Recreation have SECRETLY (nothing like the “plans” which were approved in essential secrecy) approved changes to make the destroyed boat dock even more harmful to resident animals, particularly the Charles River White Geese who have used this area most of their 39 year residence on the Charles River.

The euphemism for the area this week is “kayak launch.”

Phil has given me two reports on this.  The following report is from August 6, 2020: The second had the photos.

There's a large growth of aquatic plants along the river's edge this year. Some has washed up in big stinking mats at the kayak launch. They extend 10 - 20' out into the water along much if not most of the shoreline. Those areas they roped off to keep the geese out (on reflection I think what they set up must have been intended for large birds, not say pigeons) are in poor shape. Seems like they forgot to water them! Almost all the grass is dead hay and a lot of the shrubs are dropping wilted browned leaves. One area has a profuse growth of Jimson Weed, which is toxic and used as a cheap (and extremely dangerous) hallucinogen.

Magazine Beach is further west than the area in the warning.  Clearly this year’s resumption of poisons has spread. 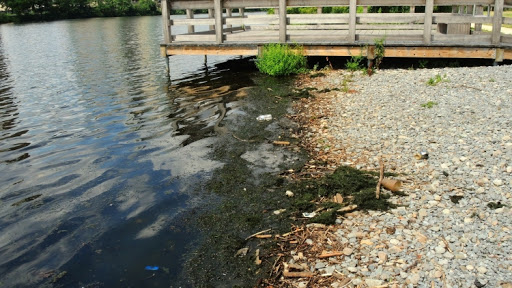 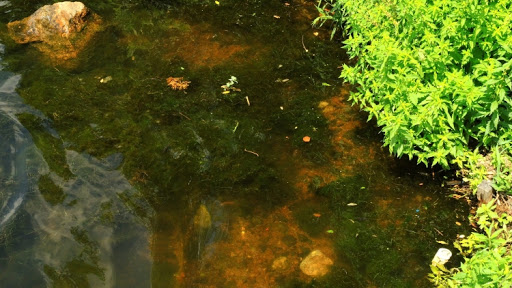 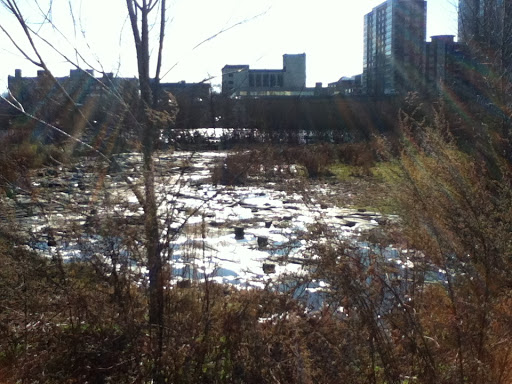 The City of Cambridge assisted her in this outrage by picking up excellent free vegetation destroyed in the process.

The Cambridge City Council has SECRETLY directly funded several destructive projects on the Charles River at Magazine Beach and repeatedly praised the DCR for their destructive activities.

Here is a crop of minute 0.42 of “A Taste of Charles River / Epic Drone View (4K)” posted at https://www.youtube.com/watch?v=WNxG2RjYf5o. 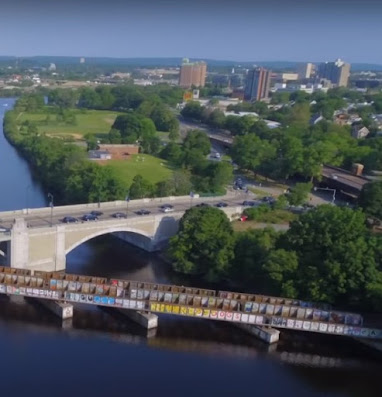 The area being destroyed by the Cambridge City Council and the DCR extends for perhaps two miles behind the camera.  In this photo it extends to an area perhaps a few hundred feet west of the right of the two brick towers toward the top of the photo and slightly right.  The tower on the left is surrounded by the I90 rebuild project in the Allston neighborhood of Boston.  The tower on the right is a massive hotel just after the MicroCenter Shopping Center.

The thick woods visible below these buildings and to their left is the thick park being destroyed by the Cambridge City Council and the DCR.

Between this woods and the baseball diamond is the area of green which was blocked by the Charles River Poisoner to create the poisoning of the Charles River.  The baseball field is near and a hair west of the “kayak ramp” which is the destroyed boat dock dating back to the .outrages of the 2000's.

The green area between there and the bridges is the environmental responsibly designed sewerage treatment plant.

Then you see the BU Bridge followed by the Grand Junction Railroad Bridge.  On the right of the two bridges is Memorial Drive, the boulevard on the Cambridge side of the Charles River.

The triangle bounded by these three is the Destroyed Nesting Area of the 39 year resident Charles River White Geese, which is the last part of their habitat not yet destroyed to them.

Posted by Friends of the White Geese at 4:09 PM