Monday evening, March 29, 2021, the Cambridge City Council received my letter concerning the poisoning of the Charles River and my CENSORSHIP in the prior meeting when I attempted to speak about it.  That communication is currently the first item posted on the Friends of the White Geese page at http://www.friendsofthewhitegeese.org/ar1.htm.  It is copied below, page by page.

The city council with its silence supported the censorship.  Very clearly, the last thing the Cambridge City Council wants is for the outrage going on on the Charles River to be heard by the people watching its meetings.

The following is an email received by all city council during the previous day and emailed to between 100 and 200 people in Cambridge:

RE: [CFL] Does Cambridge Want to Know What it Is Doing on the Charles River?

Last Monday, the Cambridge City Council chair person announced that three people had signed up to talk to the City Council.  On them only one person answered the call.  She suggested that people could continue to sign up to 6 pm, another 20 or 25 minutes.

Trouble is that I HAD SIGNED UP TO TALK as chair of Friends of the White Geese with plenty of time to get recognized.

I did do an offensive thing.  I said I wanted to talk about City Manager’s Agenda #2.  That item concerned Cambridge’s handling of the poisoning of the Charles River BY THE DEPARTMENT OF CONSERVATION AND RECREATION.  The item neglected to mention the very clear DCR responsibility for the poisoning that the City Council was were supposedly trying to correct.

I went to the sign up page.  It informed me that sign up was closed.  Several hours later, I got an email from the City Clerk’s office apologizing for somehow losing my sign up.  They suggested I sign up again.  Since I had already tried that, the suggestion was useless.

Enclosed is my formal statement of what I was trying to speak about last Monday. [ed: link above, and attached hereto, page by page]  It is on the agenda as the only communication on the agenda, BUT THE PUBLIC CANNOT HEAR OF THE VERY MAJOR OUTRAGE GOING ON ON THE CHARLES RIVER.

I had to spend $27 to get this letter under consideration.  That is the cost of Express Mail Next Day and Certified Mail, Return Receipt Requested.

My prior two letters took approximately three weeks to get through themselves, and expensive mailing.  Both had clearly strange handling by the City Clerk’s office, accidentally or otherwise, in very clear violation of procedures.  Copies of all three are posted at the top of Friends of the White Geese’ documents page at http://www.friendsofthewhitegeese.org/ar1.htm.

The attachment is only the latest communication by us about the outrages on the Charles River INCLUDING MANY, MANY, MANY objections to the poisoning of the Charles River by that “activist” using funds and “volunteers” supplied by the DCR.  That “activist” is being paid by the City Council (unless she has finished the project) to do preliminary work on the destruction of the excellent grove across from MicroCenter and next to the Swimming Pool / Bathhouse.

The “activist” has a long, destructive record on the Charles River.  She has repeatedly lied that no trees are being destroyed, a lie which is strikingly blatant.  As has been repeatedly documented in my many letters of objection to the City Council which cannot see anything wrong with her or with the DCR.

My solution is to finish the job the legislature started ten years ago when they destroyed the Metropolitan District Commission.  Many legislators were trying to protect the Charles River from this destructive entity.  Instead, the destructive “planners” sent to the DCR with their destructive plans and Cambridge government friends.  They have proceeded WITH CAMBRIDGE SUPPORT with destruction of hundreds of mostly excellent trees and heartless animal abuse.  Goals WHICH ARE IN THE PROCESS OF BEING FURTHER IMPLEMENTED WITH EVEN MORE VIGOR.

So, rather clearly, the ZOOM sign up procedure has become a situation in which OBJECTION TO THE DESTRUCTION OF THE CHARLES RIVER is kept from BEING HEARD by people watching city council.

This is a very bad situation.  Just look at the top City Council letters posted on the Friends of the White Geese page. 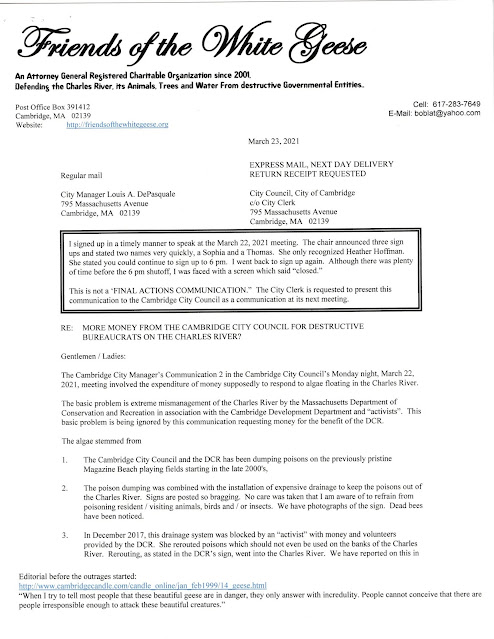 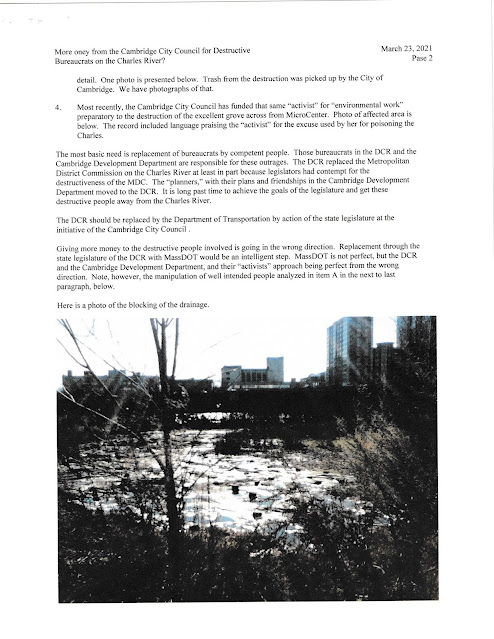 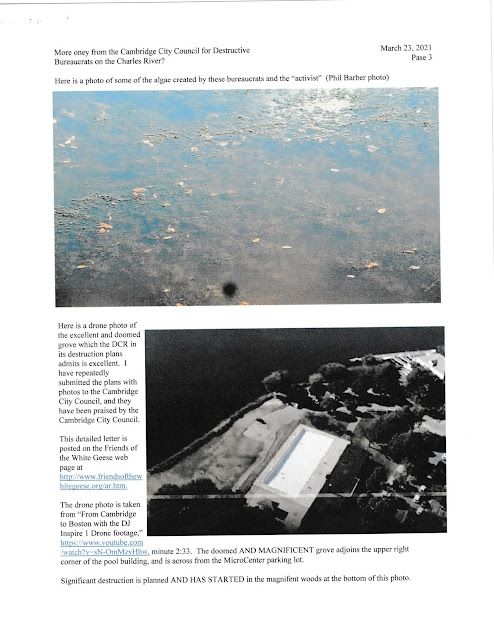 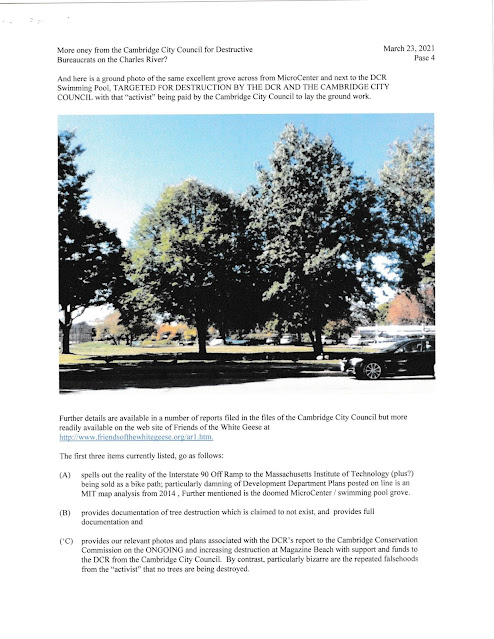 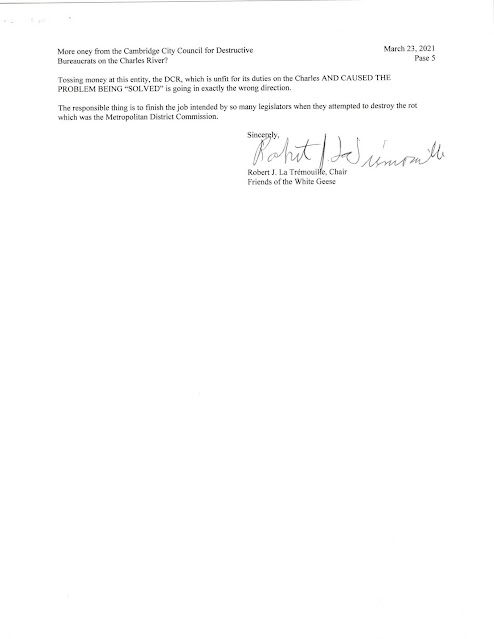 Posted by Friends of the White Geese at 10:27 AM