Archie follows up his posting of yesterday, at http://charlesriverwhitegeeseblog.blogspot.com/2011/12/bu-bridge-traffic-pattern-in-context.html, as follows:

I don't know if Google maps will help but visitors to this Blog who use the BU Bridge when entering or exiting on the Boston side pass over the Commonwealth Avenue Deck over the MA Turnpike Extension. The Deck has a sizable foot(air)print from westerly of the bridge to easterly including the Carlton Street Bridge to where it joins Commonwealth Avenue (easterly of the BU Bridge). A visit on foot provides better views of the Deck, including its extensive foot(air)print. Work on rehabbing the Deck will impact not only motorists and bikers on the BU Bridge and Commonwealth Avenue but also the MBTA Green Line's B trolleys; in addition, such work will impact the extensive high speed vehicular traffic on the MA Turnpike Extension below. So I have some doubts on the work being completed in two constructions seasons as suggest ed by BU. The phasing of the work will be critical. And as noted in my earlier submission, what happens on the Boston side of the BU Bridge impacts the Cambridge side.

Perhaps you and others from the Cambridge side can provide commentary on the Cambridge rotary issues that I referenced. The rehabbed BU Bridge is not a bridge to nowhere but its use may be limited by situations on the Boston and Cambridge sides. Perhaps MassDOT should hold some public meetings to address these situations.

I have hunted through my files for a map that could communicate Archie’s issues.

This is the best I have, and actually, it shows a lot of the relationships which might escape.

This is taken from a map prepared by the MBTA showing the BU Bridge / streetcar alternative for the Urban Ring subway project. 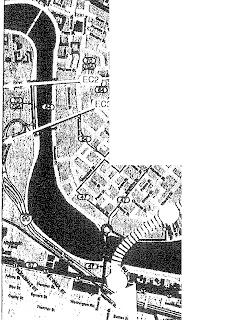 The dark area running from top to bottom is the Charles River.

At the bottom, the vertical (north / south) line crossing the Charles is the BU Bridge.

The circle at the top (Cambridge) end of the BU Bridge is the rotary under Memorial Drive.

To the lower right of the rotary, barely visible, is the Destroyed Nesting Area of the Charles River White Geese.

The massive cross hatched line coming from the right, almost touching the BU Bridge and then going right again is the proposed route of the BU Bridge crossing.

Interstate 90 is marked on the left lower side. This is the Massachusetts Turnpike.

On the left middle, I 90 can be seen becoming a bunch of spaghetti and connecting to the next bridge to the west by Cambridge Street. This is the River Street Bridge.

In 2003 / 2004, the Massachusetts Bay Transportation Authority (MBTA) demonstrated that a connecting ramp could be made from I90 to Cambridge over the Grand Junction Railroad Bridge.

Several months after this report, Harvard University bought the spaghetti which is the exit ramp from I 90 to the River Street Bridge, etc. and bought the railroad yard next to it, to which the Grand Junction goes.

That area is now owned by Harvard University and appears to be the planned future location of Harvard Medical School.

Toward the bottom of the map, there is a roadway with “57" (bus line) on it and a bunch of T’s (street car, Green Line B stops). This is Commonwealth Avenue.

Also present but almost not visible is the Boston side correlative to Memorial Drive, Storrow Drive / Soldiers Field Road (Boston area roads go by multiple names. This assists in confusing visitors.) This is the essentially unmarked area between I90 and the Charles River west of the BU Bridge. It continues barely visible east of the BU Bridge under which it passes. Before coming to the BU Bridge, it also passes under the Grand Junction Railroad.

The traffic pattern for traffic heading south from the BU Bridge currently consists of rotary which is partially obscured by the proposed street car / Urban Ring alternative.

The solid line marked “47" is a bus route which follows that southern pattern. It crosses I90, then turns east on Mountfort Street and then turns south again on Park Drive.

Traffic in the opposite, northerly direction, comes from Park Drive to Mountfort Street and turns north on the Carlton Street bridge over I90. This bridge is obscured by the proposed street car line, but it can be seen approaching from the south as the next street east of the extension of the BU Bridge.

Carlton Street, with a name change, continues straight north past Commonwealth Avenue to Storrow Drive / Soldiers Field Road, connecting to it and receiving traffic from its eastbound direction.

The northerly traffic turns at Commonwealth Avenue and goes over the BU Bridge.

I hope this is helpful.
Posted by Friends of the White Geese at 8:58 AM