A few more photos on the Outrage on the Charles River. Animal abusers and their graduations.

In my most recent report, at http://charlesriverwhitegeeseblog.blogspot.com/2012/08/magazine-beach-using-vegetation-for.html, I presented the reprehensible (to cross quote a civil rights judge) situation on the Charles River in context.

Key to the report were photos taken on July 23, 2006, by an official of the Massachusetts Water Resources Authority, the entity which owns the sensitively designed sewerage treatment facility between the Magazine Beach playing fields and the BU Bridge / destroyed nesting area of the Charles River White Geese.

In this report, I will not duplicate that report. I hope to present many more photos from that shoot in a future report.

The reality is that, throughout this continuing outrage, the good guys have vastly outnumbered the bad guys, but the bad guys through lack of ethics and a massive, skillfully lying organization in Cambridge have achieved truly horrible destruction.

In this report and in following reports, I will try to put things in perspective.

This photo does a good job of capsulizing the frauds being inflicted by the Cambridge Machine at Magazine Beach.

This photo is from 2004. This is the first awareness by the Charles River White Geese of the starvation being inflicted on them by the bizarre destruction of their food at Magazine Beach, starvation supported by the Cambridge Machine. This part of the heartless animal abuse whose increase the Cambridge Machine are fighting to keep and to expand with the current frauds.

The Cambridge Machine fights to continue the totally inexcusable infliction starvation of these beautiful, valuable more than 30 year permanent residents and to expand the cruelty. But the Cambridge Machine, pretty much non stop, lies that they are holier than thou. 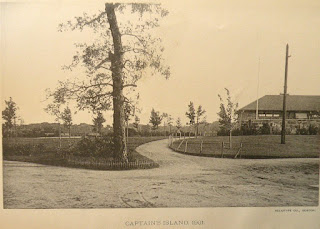 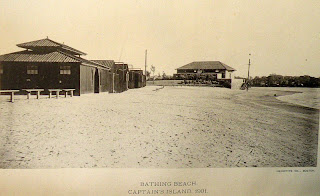 These are photos of the Magazine Beach bathhouse in 1901.

This structure is on the top of the hill to the west of the Magazine Beach playing fields. The grass around it probably has continued in place for more than a Century. Related grass at the playing fields was destroyed by Cambridge / DCR in the outrages at Magazine Beach, when they destroyed native grass and replaced it with sickly stuff that requires poisons to survive.

All they have to do to end dumping poisons on Magazine Beach next to the Charles River is replace the dumping of poisons with dumping of seeds for the responsible grass they destroyed. This grass has survived 110 years without poisons.

This was after the first destruction, by Boston University in Fall 1999. Boston University entered the nesting area with its vehicles of destruction the morning before a Cambridge Conservation Commission hearing on the work. They completed the work before the legal appeal period concluded.

BU destroyed a viable, multi-species ecosystem in the middle of a city on the banks of the Charles River. They replaced this magnificent blend of native vegetation with grass, grass, grass and gravel walk which proceeded to wash into the Charles.

BU spent six months lying that they did not do the destruction until they were condemned for this outrage by the Cambridge Conservation Commission.

Then they blamed six months of lies on the President’s secretary who was not fired.

After that, they proceeded to brag about work they denied doing for six months.

They drove away the vastly diverse population by destroying their homes. The Charles River White Geese have only one home, where they have lived for more than 30 years.

The lawn BU inflicted on the resident animals proceeded to be used only by their animal victims. The lawn gradually regained its wild character until the Charles River “Conservancy” started destroying the environment of the Charles River, doing the dirty work of the Department of Conservation and Recreation. Starting in 2003, almost all ground vegetation between the BU Bridge and the BU Boathouse was heartlessly destroyed.

The tree in the background may still be there, to the west of the outrage.

(2) Friends feed the hungry and very bewildered white geese over a construction barrier. 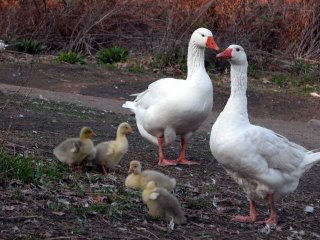 F. 2009. Prior situation at the now soon to be impenetrable thicket.

Native vegetation. It was naturally beautiful but not garden club beauty. It got big enough to protect the nests but it could never achieve the incredible size and obstruction of the outrage at Magazine Beach. 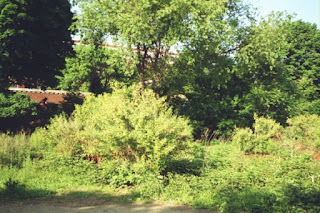 I have too many more photos. I will stop here and pick up later.

3. The assassinated leader of the Charles River White Geese. Animal abusers and their graduations.

In fall 1997, the Cambridge City Manager announced his plans for environmental destruction and heartless animal abuse in the BU Bridge portion of Memorial Drive. The front organization presenting him was the predecessor to the falsely named Charles River Conservancy.

In fall 1999, Boston University, in an illegal agreement with the Department of Conservation and Recreation started the outrage with the destruction of the Nesting Area of the Charles River White Geese in violation of environmental protection laws.

In December 1999, the Cambridge City Council voted to fund the outrages which occurred in 2004 and 2008.

The obvious contempt of these entities for these beautiful Charles River White Geese sent a message which was correctly interpreted by a violent, disturbed person.

Bumpy, the elderly and undisputed leader of the Charles River White Geese was killed in early July 2001 almost certainly by a person who made the killing the pinnacle of truly outrageous achievements. He spent several months beating to death mother geese on their nests. After the killing of the leader of the gaggle, he graduated to rape and murder in the location where he had been killing geese.

The Cambridge Chronicle dominated its front page with a memorial service we had for Bumpy after the killing. The memorial service was conducted on top of the sewerage plant. The plant is skillfully disguised as a grassy knoll with trees and the Charles River around it. The plant is most recognizable as a sewage plant from the direction of the Magazine Beach playing fields.

The Cambridge City Council had repeatedly been begged to do something about the goose killings. Repeatedly, people reminded them that animal abusers graduate.

The Cambridge City Manager’s administration has been in the middle of the governmental outrages on the Charles River.

The Monteiro v. Cambridge case concerns actions which culminated after the mass animal killings and the rape and murder. The Cambridge City Manager destroyed the life of Malvina Monteiro in retaliation for her filing a civil rights / women’s rights complaint.

The Superior Court Judge said “reprehensible.” The jury ordered damages of $1.1 million and penal damages of $3.5 million, possibly greater in percentage than allowed by law. The Appeals Court panel refused to dignify the Cambridge appeal with a formal opinion. “ample evidence [of] outrageous misbehavior.”

One Cambridge City Councilor was fired after he called the destruction of Malvina Monteiro’s life no big thing.