Plans for more destruction attacking the Animals of the Charles River.

A few weeks ago, I reported on a city council hearing concerning a new highway proposed to be constructed along the Grand Junction Railroad which would directly impact the Charles River White Geese.

I will post my communication in parts shortly. I have been trying to figure out how to handle a massive PDF document of more than a hundred pages.

If you look at the lower right, you will see a good map representation of the area we are mostly concerned about, the Destroyed Nesting Area of the Charles River White Geese.

The Destroyed Nesting Area and its environs are in the right hand portion of the bottom.

The area between these structures is the Destroyed Nesting Area of the Charles River White Geese.

The outrage is the marking in the middle of the DNA. This, casually presented, is a proposal to destroy the DNA for animal habitat. The euphemism is “bike path”. The reality is massive destruction. This highway would follow the Grand Junction Railroad to the bridge. It would travel down a slope heavily used by the Charles River White Geese and their friends. It would go straight ahead through favored animal habitat on the edge, continue around the nesting area on the edge and go up that hill to the ramp again.

The portion which follows the Grand Junction would have a fence constructed along its length, preventing access to the wooded area above railroad by the Charles River White Geese.

So they are fully destroying the Nesting Area for animal use and preventing access to the area they have not destroyed.

To make it worse, as usual, there is a responsible alternative which would do the job better and cheaper.

In about the middle portion of the map, this highway called a bike path crosses another proposed roadway which is a solid gray.

Until the bike highway gets to this point, coming from the Nesting Area, it follows a building which faces on Memorial Drive.

The opposite side of that building is Vassar Street, which ends on Memorial Drive. Vassar Street turns at a point which is very close to the crossing of those two proposed highways. Vassar Street is only separated from this intersection by a parking lot.

It would be simple and very direct to turn the bike highway at this point, run it through the parking lot, along Vassar Street and end it at Memorial Drive.

The markings which follow Memorial Drive to its right are an existing bike highway to which the proposed bike highway is intended to connect.

Compare the difference between running the new bike highway through animal habitat and running it down Vassar Street?

Vassar Street, of course, by a long shot.

But there is a value to running the Bike Highway through the Destroyed Nesting Area. The Department of Conservation and Recreation has a goal of killing off all resident animals on the Charles River Basin. It is buried in their secret definition of parkland. The long route, at the expense of the supposed purpose of the highway, gloriously kills off animals, the Charles River White Geese and other free animals living there.

Here is a photo from the ramp / existing bike highway, perhaps where the new and very destructive highway would go. 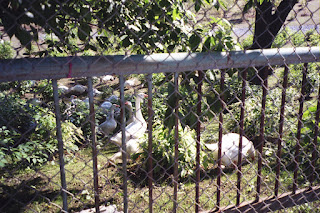 We are dealing with really rotten people.
Posted by Friends of the White Geese at 8:27 AM