1. Introduction.
2. General before and after photos.
3. As usual, outrageous lies.
4. What a responsible government would be doing.
5. Some nice photos.
6. Contact numbers.

I write this report with severely conflicting feelings.

I am very happy with Jennifer Letourneau, the executive director of the Cambridge Conservation Commission.

My disgust with the Department of Conservation and Recreation of the Commonwealth of Massachusetts remains unabated, as does my disgust for the “responsible” elected officials and flat out contempt for the fake groups whose lack of ethics and contempt for basic principles of decency are so important in allowing these outrages to continue.

For an excellent and extremely recent example of the contempt for ethics of the fake groups, please see my recent posts at http://charlesriverwhitegeeseblog.blogspot.com/2013/04/magazine-beach-bad-faith-flaunted-by.html and http://charlesriverwhitegeeseblog.blogspot.com/2013/04/the-charles-river-corrupt-practices-and.html. This behavior is not at all unusual from the Cambridge Machine. The trouble is that extended discussions of the pattern of repeated outrages can be overwhelming. The Cambridge Machine lies about which side they are on. They stoop to belligerent actions of corruption to keep unforgivable behavior in place and expanding.

I have for some time now been reporting on the latest outrage at the Destroyed Nesting Area of the Charles River White Geese, parking by railroad workers in the most sensitive part of the world of these 32 year resident beautiful animals.

A few weeks ago, I attended a meeting of the Cambridge Conservation Commission in which I raised questions as to the actions of a contractor on the Grand Junction Railroad tracks next to the Destroyed Nesting Area of the Charles River White Geese. When it developed that the contractor really had nothing to do with the situation, I stopped my comments and informed the committee that I would talk with their Executive Director, Jennifer Letourneau.

Jennifer delivered, subject to the special limits of her powers. At the request of the City of Cambridge, Cambridge has been exempted by the Massachusetts legislature from river protections which are normal in almost all other communities in the Commonwealth of Massachusetts.

2. General before and after photos.

Here is a photo of the core part of the Destroyed Nesting Area of the Charles River White Geese on April 16, 2013: 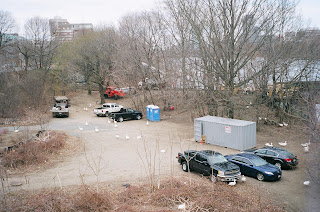 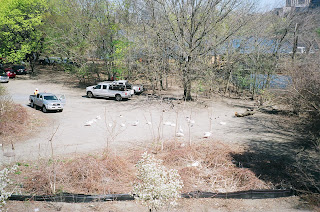 In both photos, there is a very large tree. In the first photo, it is upper right. In the second photo, it is still in the upper part of the photo, just a little more toward the center. Since the City of Cambridge and the DCR started deliberately starving the Charles River White Geese, it has been the core of their existence. They live under it.

To make things worse, as of March 24, a massive metal building was dumped under that tree.

In the first picture, you can see distressed resident geese wandering through what should be their cherished nesting area, confused, doing what they can to exist.

In the second picture, you can see that the parking has been pulled back beyond a line. That line would appear to be the severely limited limits of the authority of the Cambridge Conservation Commission. The river is to the right.

The Charles River White Geese have taken back the most cherished part of their home. They have occupied the area which previously was denied to them.

The outrageous metal building is gone.

This change is a limit to an ongoing outrage. The change has not ended the outrage. Vehicles are still stomping on what is animal habitat, a nesting area for 32 years. They have been driven back from the most irresponsible behavior but still being as irresponsible as they can get away with. They continue to pound in the ground which should be cherished and held with care.

In the first photo, you can see a blue object smack dab in the middle. This is two portapotties. In the December -January portion of the outrage, the one portapotty was next to the BU Bridge in the created parking lot. In the second photo, it is at the upper left, in the edge of an area of native vegetation which has not been destroyed YET.

Here is a photo of an individual who claimed to be some sort of honcho. The date was December 28, 2012.

He is holding a cell phone by which he claimed to be calling the State Police as part of evicting me from the Destroyed Nesting Area. He was highly disturbed at my entering this public wildlife area and photographing the outrage he and his associates were committing.

He is standing at the entrance to the Destroyed Nesting Area. You can see the irresponsibly parked cars behind him. To his immediate right (left as you are viewing) and only a few feet away is the location where responsible people would be parking.

The day after the Cambridge Conservation Commission meeting, I passed on to Jennifer Letourneau links to reports on this blog of the ongoing outrage. She passed them on to Frederick Corsi who allegedly manages the area for the DCR. Corsi claimed incompetence.

Corsi said he knew nothing about this continuing outrage, neither in December and January, nor in the current outrage. He claimed lack of knowledge of the metal building.

And this apparent representative of the MBTA was threatening me with arrest for photographing their outrage?

4. What a responsible government would be doing.

Remember, the DCR has in the fine print of its goals the destruction of all animal life on the Charles River Basin.

It, however, fits in very well with the Cambridge City Council, the City Manager, and the fake organizations.

At the state level, the Massachusetts Department of Transportation has been a breath of fresh air from the stench of Cambridge and the DCR. MassDOT managed the repairs of the BU Bridge which looms over the Destroyed Nesting Area to the west and from which the photos from above have been taken.

This is a photo of the parking lot created next to the BU Bridge. These are two vehicles associated with the project on March 29, 2013, before the repair work started. The highway comes off the sidewalk at the northwest corner of the Destroyed Nesting Area, an entry illegally made by Boston University for the DCR in October 1999. The brick structure at the top is the Memorial Drive bridge. The area under the bridge provided plenty of very convenient area for parking.

The "honcho" in the above photo was standing on a line between the black car and where they should be parking. He was not that far from either. 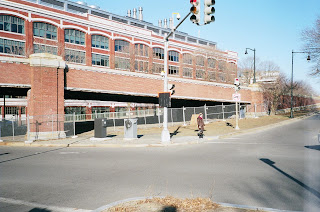 Even with all those cars parked in the middle of the rotary, the large area between the on ramp and Memorial Drive is empty of cars. The lazy workers are still destroying the Nesting Area of the Charles River White Geese with totally unnecessary parking only a few feet away from this responsible location for parking.

And I have previously published a photo of the near portion of the Magazine Beach playing fields which is totally unused, except for sickly grass which requires poisons to stay alive, poisons which are being drained off by a massive drainage system which has replaced playing fields. Until this outrage started, responsible grass was there for the better part of a century. See my links at the top for a summary of this outrage’s handling by the fake group fronting for the Cambridge Machine. 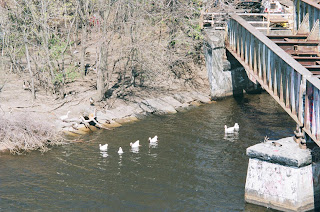 The cherished heart of the Destroyed Nesting Area is just above the vegetation.

March 16. The tiny yellow figures are goslings, perhaps a day or so old. They have been trooped by their parents through an area which has been the cherished nesting area of the Charles River White Geese and which was then and is now an irresponsible parking lot. 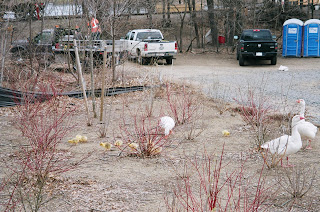 They are feeding in the soon to be new impenetrable thicket of introduced bushes planted by the DCR on the hillside under the on ramp.

Judging by the number of babies, it is my guess that this is more than one brood.

For an additional example of common decency being “unacceptable”, please go to the above links for the fraud of a fake neighborhood association protecting these rotten people.

Emails for all Massachusetts legislators are posted at: http://charlesriverwhitegeeseblog.blogspot.com/2013/04/emails-for-all-massachusetts.html.

And remember, the governor is seeking bond authorization for a highway to make this outrage even worse. The fake description is "underpasses."

The Cambridge, MA, USA City Council is really beneath contempt. On general principals, however, their contact email is council@cambridgema.gov. Emails to this address are forwarded to each member individually.
Posted by Friends of the White Geese at 5:09 AM