I have been very busy over the past several days and have only been able to post one very delayed post.

Part of the problem has been trying to analyze the package of responses to the Environmental Notification Form on the proposed expansion of Boston’s South Station railway terminal.

The expansion is relevant to the Charles River because:

1. Passenger service has been rejected for the Grand Junction Railroad based on the availability of trackage as part of the expansion at South Station.

2. One possibility cited in the expansion proposal would be to use the Harvard University owned Beacon [railroad] Yards for layover of trains when between trips. Beacon Yards is visible from Magazine Beach.

Harvard’s very clear intent to use the Beacon Yards and Harvard's also owned exit from the Massachusetts Turnpike (I90) to Cambridge / Brighton for university expansion is related to and is a key part of the ongoing environmental destruction on the Charles River.

In the following aerial or satellite picture taken from a prior environmental document, the Beacon Yards / Mass. Pike exit are at the left, marked “Cambridge-Allston Tolls”. Immediately to the right is “Magazine Beach”. 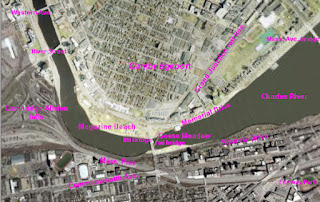 My prior report on the meeting which presented the Environmental Notification Form may be viewed at: http://charlesriverwhitegeeseblog.blogspot.com/2013/04/south-station-expansion-meeting.html.

The state’s response to the Environmental Notification Form, called the Secretary’s certificate, may be read / downloaded at: http://www.massdot.state.ma.us/Portals/25/Docs/efs/EnvironmentalNotificationForm.pdf.

The Harvard comments are very significant. At minimum, Harvard seems to indicate that use of the Beacon Yards for layover of trains could derail Harvard’s relocation of the Harvard Medical School to that location.

These comments are very major.

I am tied up trying to evaluate a very large amount of paper.

But, as I said, Harvard’s comments are very major.
Posted by Friends of the White Geese at 7:28 AM