Harvard objected to the concept of using the Beacon [railroad] Yards for layover of trains from South Station. I interpreted this as flagging Harvard’s planned use of the Beacon Yards for a relocation of Harvard Medical School. The Beacon Yards are located across the Charles River from Magazine Beach.

I have received a very astute comment in reply. The writer interpreted my report as talking of a new hospital facility.

I replied quickly, in detail, but on thinking things over, the comment raises a concept which could be right and is more ambitious than I imagined.

Usually a medical school is adjacent to a hospital. Is Harvard going to build a new hospital at this site? Very ambitious yet they have the money for it...

At minimum they will ensure a quick route to/from Longwood before relocating (or establishing a satellite location for) the med school.

Thank you for the astute question.

This has been part of the Urban Ring rapid transit discussions, among other things.

Harvard is proposing a Red Line Spur from Harvard Station as essentially an extension of the Alewife - Harvard portion of the Red Line heavy rail subway line. It would be very expensive and have a lot of "deep bore" construction.

It would connect to Harvard Medical School in the Beacon Yards and then would connect to a supposed bus tunnel that is proposed from the Yawkey station area, near Fenway Park and Kenmore Square, to Longwood & Louis Pasteur and then to Ruggles. As I recall, Harvard's proposed connection would be at about the current Fenway / Fenway Park stop on Park Drive, Boston. This is the first stop on the Riverside street car line out of Kenmore. The Longwood & Louis Pasteur station is proposed at a centralized station position for the Medical Area.

The ENF comments by Harvard on the South Station Expansion go into surprising detail concerning the future Harvard Medical School Area, currently Beacon Yard and the Allston / Cambridge exit from the Mass. Pike. Harvard made its purchase months after the MBTA determined that a Mass. Pike exit ramp could be constructed to Cambridge over the Grand Junction Railroad Bridge.

The busway should be considered in coordination with the Urban Ring subway proposal. The responsible alternative would have Orange Line (heavy rail) technology running out of Ruggles Station under the same route and then to Kendall, Lechmere and the Orange Line north.

Ruggles Station is on the Orange Line heavy rail subway route. An excellent phase 1 would start at Ruggles and have the new route go as far as Kenmore, providing direct Orange Line connection through Ruggles to downtown, etc. This would service the Longwood / Harvard Medical Center, Fenway Park, and Kenmore Square. Operation of the new route would not really be that different from that which followed on the creation of the Braintree branch of the Red Line, except for the very central location.

Major games are being played in that the Urban Ring concept has always been rapid transit but the bureaucrats have turned the concept into a massive bus proposal as a supposed interim stage. Buses make excellent sense in the outer areas. They make no sense in the core.

Note, however, that there is an alternate route pushed by the city of Cambridge which would be streetcars. Cambridge lies that their streetcar route is the only alternative on the table.

Cambridge has have meaningful problems with that lie in that the legislature is spending a good amount of money upgrading Yawkey Station in place while Cambridge's streetcar route would move Yawkey Station to the Mountfort / St. Mary's Street area a block from BU's Marsh Chapel. A Yawkey / Kenmore / Urban Ring megastation is a jewel in the responsible alternative route.

Here is the Boston portion of the two MBTA alternatives from their environmental filing.

The two alternative proposals are the broken lines. The Harvard / Longwood Medical Area is at the bottom of the map. Fenway Park is the circular open area toward the top of the map and slightly right of center. Yawkey Station is on the left side of the broken line from Fenway Park and slightly up. Cambridge's desired relocation of Yawkey Station would be in the upper left of the map just below the words "St. Mary."

Here is the MBTA plan of the Cambridge City Manager's version of the Urban Ring proposal on the Cambridge Side of the Charles River. This plan links directly to the above map. Beacon Yards / the future Harvard Medical School is visible on the far left just above the bottom of the map. 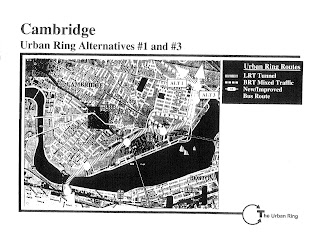 Here is the Cambridge side of the responsible alternative, the "Kenmore Crossing."

I have previously posted details on the Urban Ring including the Harvard Medical Area impact, at: http://charlesriverwhitegeeseblog.blogspot.com/2012/08/urban-ring-rail-maps-two-options-boston.html. This is just one of a number of presentations of these plans on this Blog.

Needless to say, my report on the Secretary's ENF certification could get very long.

My idea on rapid transit to the new Harvard Medical School would be a Green Line (streetcar) spur from Comm. Ave. / BU Bridge on air rights through Harvard Med, and then going underground after Cambridge Street under Harvard's new road (announced in the "Barry's Corner" development), around Harvard Stadium, under the Charles, and connecting to Harvard Station by the still existing tunnel to the former Red Line yards which are now the Park and Hotel complex.

It is very strange to propose a concept which many might call outrageous and be outdown by a well thought question out of the blue.

The Harvard purchase in Allston is massive in Boston terms. The area purchased is larger than Boston’s Back Bay neighborhood.

The first phase of Harvard / Longwood Medical Area relocation was announced for the near future. That is the proposed relocation of the Harvard School of Public Health which is now on Huntington Avenue between Huntington Avenue and the Medical School. This has already been announced. The School of Public Health, however, is moving to the Western Avenue area, a couple of blocks west of the Beacon Yards / Mass. Pike exit.

Could Harvard and friends be thinking of moving one of the hospitals as well, or perhaps part of a hospital or some other accumulation? Very possibly.

Other obvious less extreme targets would be Harvard Dental School and the Massachusetts College of Pharmacy.

And a medical related facility in the Back Bay has put itself on record in favor of some of the games going on on the Charles River already.

Nice comment. Thanks.
Posted by Friends of the White Geese at 6:37 AM