Boston.com, at http://www.boston.com/yourtown/news/allston_brighton/2013/06/state_plans_2-year_10m_project.html, is reporting the replacement of a major bridge abutting Harvard University’s Medical School relocation in planning.

The specific bridge is the bridge by which Cambridge Street, Allston (the extension of River Street, Cambridge) crosses over the Massachusetts Turnpike, I90.

This bridge is located perhaps a mile from the Charles River along this Allston / Boston extension of the River Street Bridge / River Street Cambridge. Harvard’s property south of Cambridge Street is larger than Boston’s Back Bay neighborhood. It is generally triangular shaped with the northwest boundary being Cambridge Street. The southern boundary is the railroad’s mainline east west, the route which connects Boston to Framingham and Worcester, MA. The northeast boundary is the Charles River.

The bridge being replaced is at the far corner of the southern boundary of the property. In addition to the Massachusetts Turnpike, it also crosses the railroad main line. It approaches the Allston Village area of Allston which is a left turn off Cambridge Street going away from Cambridge, and approaches Union Square, Allston, which is straight ahead. The opposite direction, going to Cambridge, brings you to Central Square, Cambridge, about two miles from the bridge.

Boston.com has an excellent map. Boston.com reports that construction will begin this fall. During the two years of work, the bridge will be replaced in parts with traffic continuing over the bridge in less lanes than currently exist. The project will also replace a pedestrian bridge which is the historical replacement for Franklin Street in Allston which was bifurcated by the Massachusetts Turnpike with about a block remaining south of the turnpike.

The opposite end of the southern boundary of the triangle approaches the Grand Junction railroad bridge under the BU Bridge.

Several months before Harvard accomplished its incredible purchase, the Massachusetts Bay Transportation Authority, which runs public transportation for the Boston region, did a study which demonstrated that an off ramp could be built from the Massachusetts Turnpike to Cambridge over the Grand Junction Railroad Bridge.

A whole bunch of otherwise bizarre initiatives on the Cambridge side of the Charles River fit in place as precursors to the creation of that off ramp.

Harvard, in its response to a recent Environmental Notification Form commented on the imminent work anticipated on roads in the area of its future Medical School. Harvard’s comments are posted in the Comment Letters to the South Station Expansion Project, at http://www.massdot.state.ma.us/Portals/25/Docs/ScannedLettersFromMEPA_ENF_042613.pdf. Harvard’s comments appear at pages 57 to 64.

The following is a 2006 aerial map / satellite photo from a state prepared environmental report. 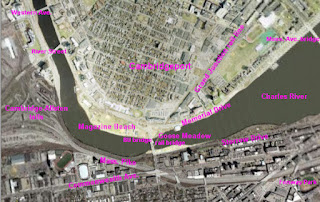 It does not go as far to the south as the bridge in question but gives a very good view of the Charles River End of the Harvard Medical School triangle.

The BU Bridge which is at the bottom middle of the photo has been rebuilt.

The Grand Junction Bridge, under the BU Bridge, is currently seeing major repairs, with destructive parking by the workers.
Posted by Friends of the White Geese at 4:28 PM