As part of the rottenness in Cambridge, the Cambridge Machine and the associated bureaucrats, these individuals have been deliberately starving the beautiful, valuable Charles River White Geese. They are 32 year residents of the area and highly popular with normal human beings. The Cambridge Machine does not openly fight for the abuse of the beautiful beings, they just lie that they are fighting for the Charles River, imply that it is ant-Charles to support anything which they do not dictate and omit the real problems which publicly fighting for a tiny number of things and sneaking in as fast as possible the really rotten stuff.

My last extended report on the Destroyed Nesting Area is posted at http://charlesriverwhitegeeseblog.blogspot.com/2013/06/railroad-worker-destructiveness-returns.html. Jennifer Wright Letourneau of the Cambridge Conservation Commission did some good work and I commended her on it.

This time, I contacted Jennifer quietly with the key photographs. These people were once again parking in the area they had left, plus they had dumped what looks like a flatbed transport trailer, all in the area they supposedly had left.

Yesterday, I observed the trailer being removed, but the parking got worse.

Here is one photo of the carrier parked under the geese’ most important tree, and of a car even further into the supposedly no longer being destroyed area. 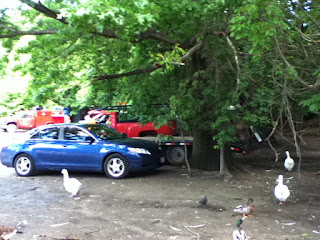 Here is a photo from yesterday of the carrier being taken away:


The first photo, is of the small truck which is visible in the prior photo from a different angle. If you look in the background, you can see a strip of brick / concrete running from just above the crushed stone to the left and stretching to the right, getting less visible.

This is edge of the Memorial Drive overpass which is under construction.

This is where responsible people would park, but we are dealing with people protected by the rotten Cambridge Machine.

These photos were taken before the removal of the carrier. The visible truck is further into the most sensitive area than the carrier. 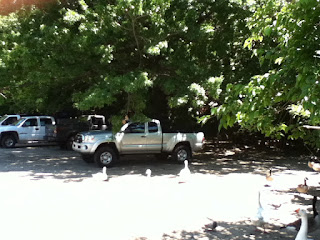 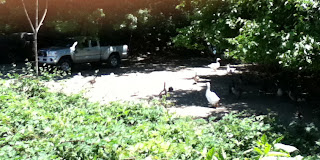 These are additional photos of the original truck. In the background are more private cars parked. Just beyond them is the staircase which was illegally installed for the state bureaucrats by Boston University. It leads to the location where responsible people would park. The second shot is from a further distance, showing the outrageous gravel highway installed which seems to be intended to be part of the East West highway involved in the Cambridge Machine’s corrupt behavior. 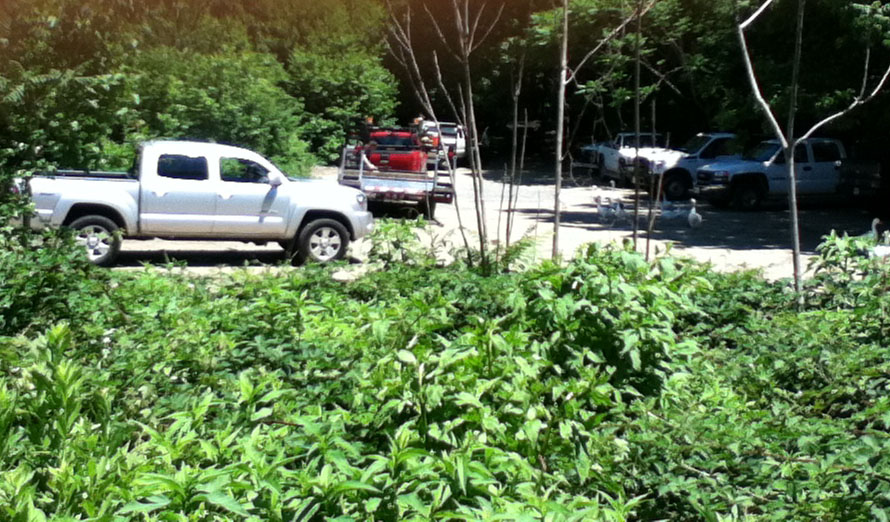 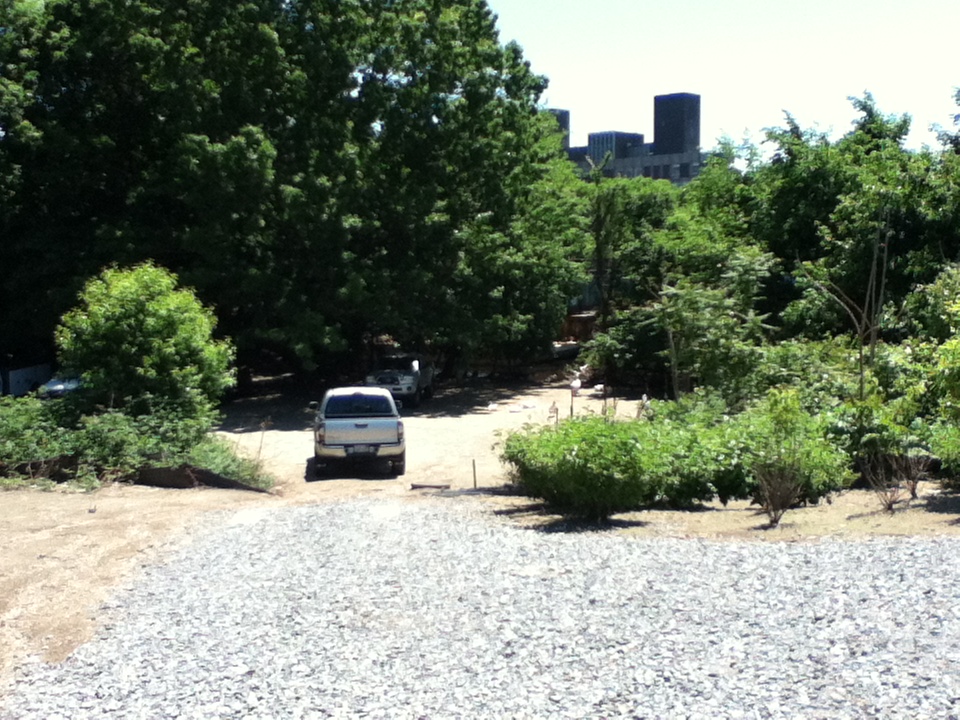 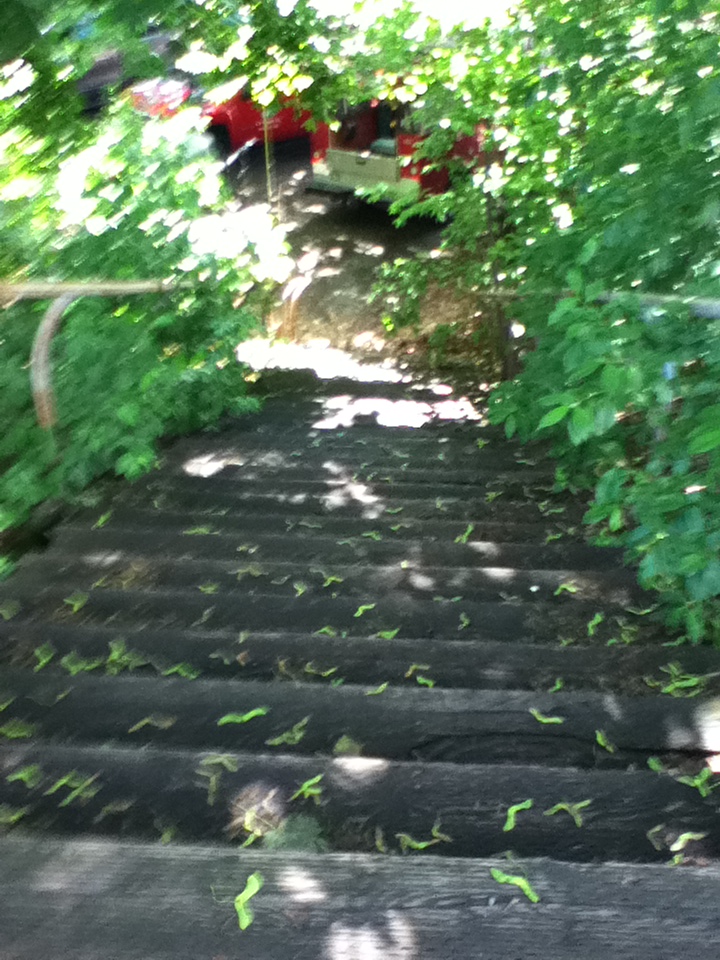 This is the view of the on ramp turning from the position where the immediately preceding photo was taken. The black vehicle is a state police vehicle with blue light flashing directed to traffic coming up the ramp. He is protecting construction workers working on the ramp side of the bridge. Responsible railroad workers would be parking in this location. The cop would have moved closer to the workers in such a case. 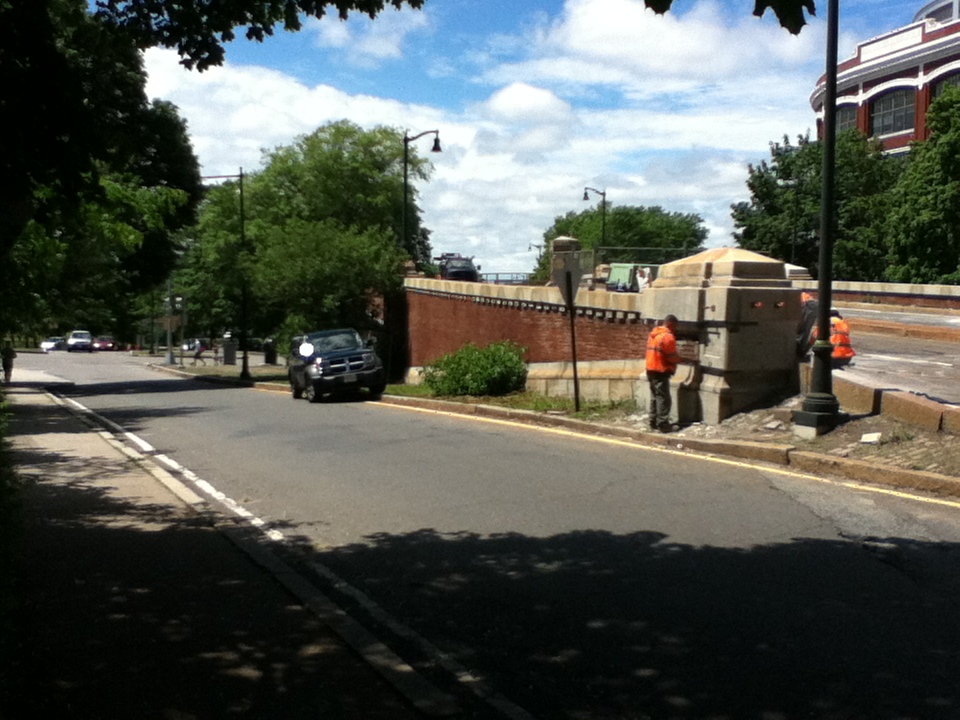 This is the opposite end of the ramp where they should be parking. 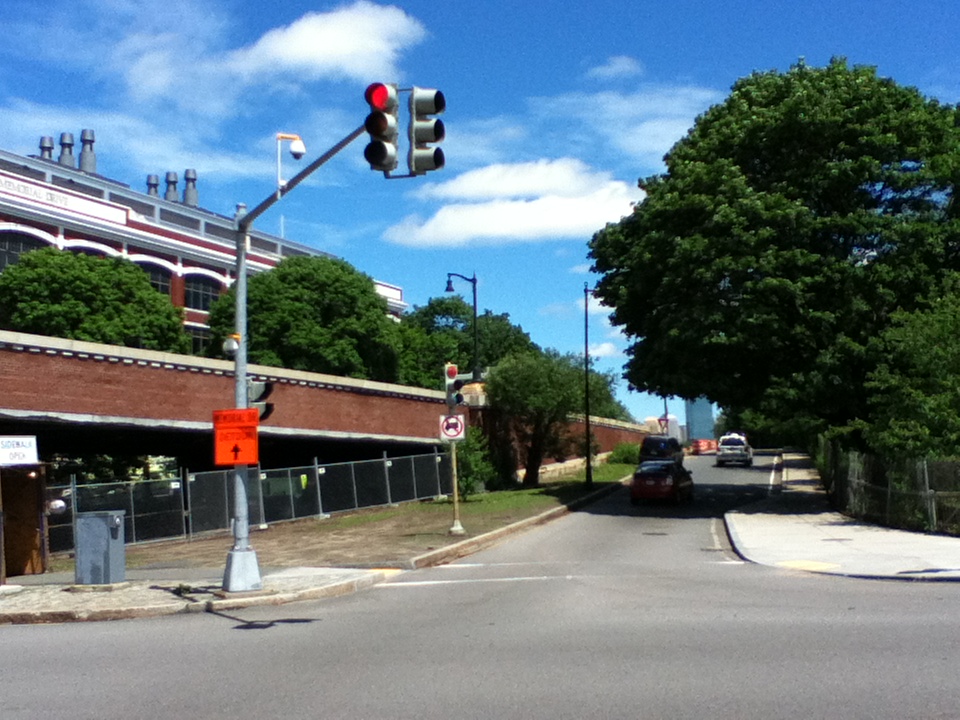 This is a view from the same angle taken from the off ramp from Memorial Drive to the rotary and the BU Bridge. The ramp shown above is where the left line of cars in heading. To the left of the picture is where workers on the overpass are parking. 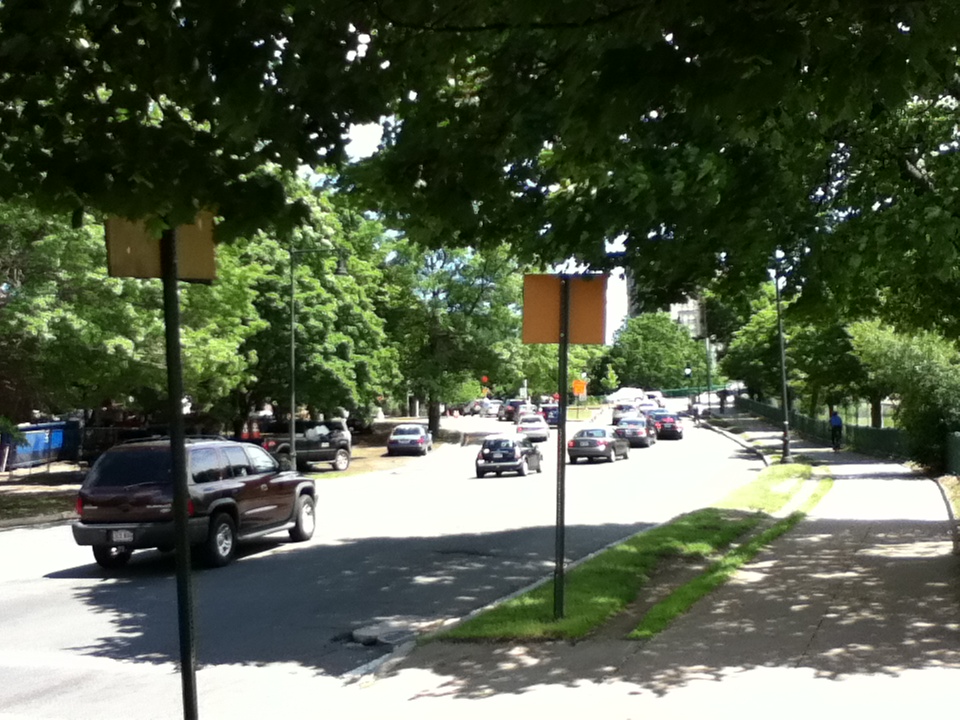 Turning from this point and, possibly moving a few feet on the ramp, this is a second, very large available parking area. Workers on the BU Bridge project parked under Memorial Drive in the area in the preceding photo. The walk they endured was very similar to the walk these lazy people would have to this location. The grass shown is probably sickly stuff introduced in place of the grass which had been there for the better part of a century. A responsible government would be sewing seed for the grass which was destroyed rather than sewing poisons to keep the sickly stuff alive. 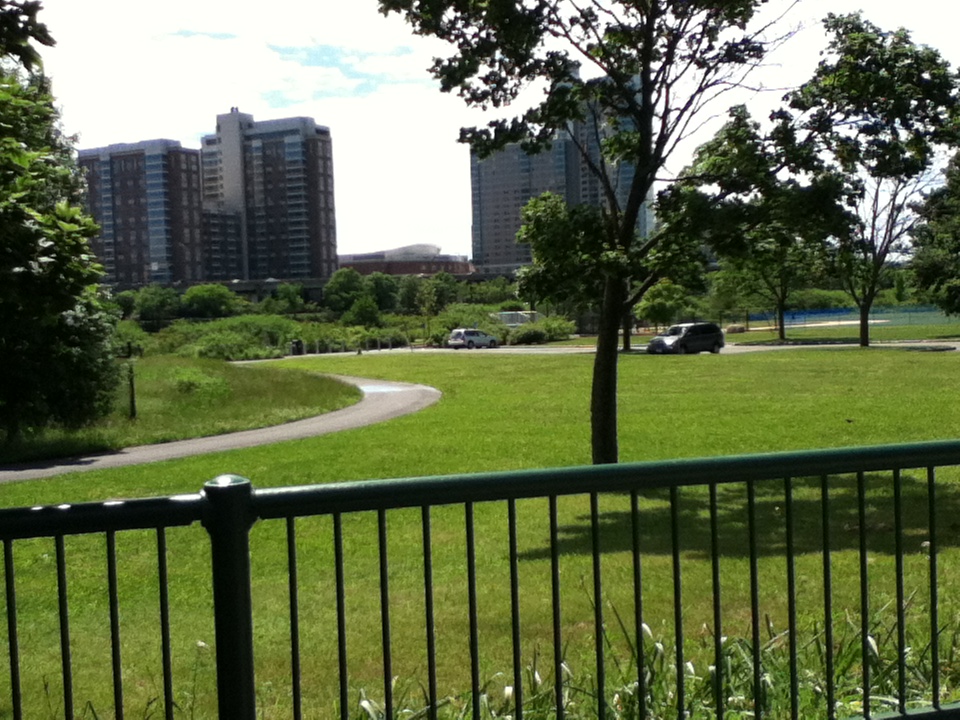 2. Some specific goose photos from June 15. 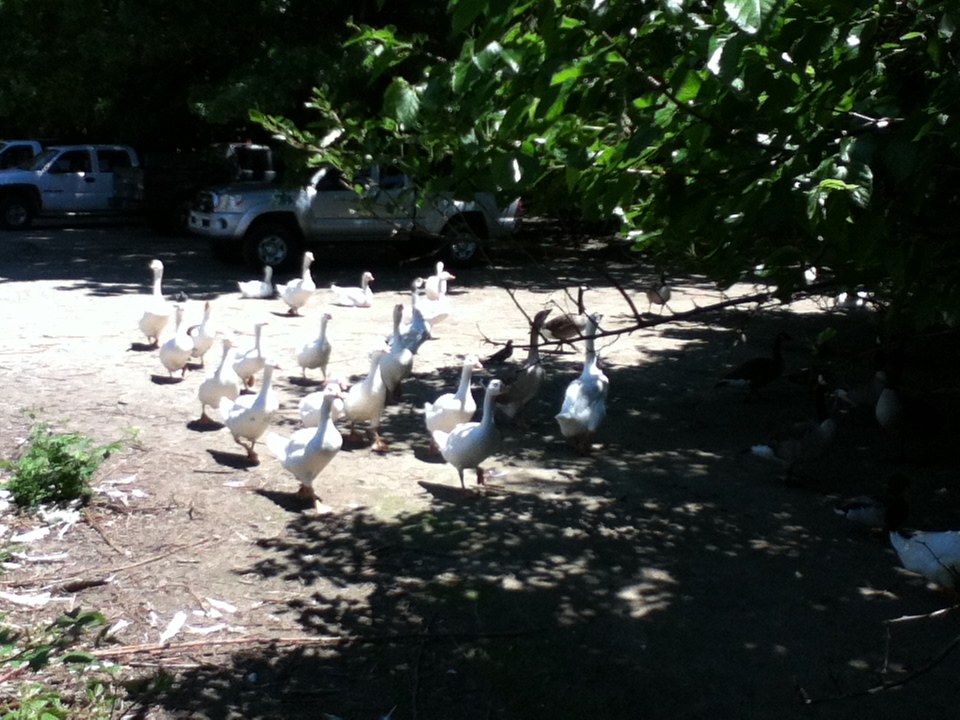 This is the area next to the BU Bridge. This 50 foot area had to be destroyed for access to work, but there seems to be no intent to vegetate the area. This could be an advantage since native vegetation which has not been destroyed by the falsely named Charles River “Conservancy” or the BU Bridge repairs continues to the left. This is shown in photo [06-15 DNA 03 176 - crop], above. 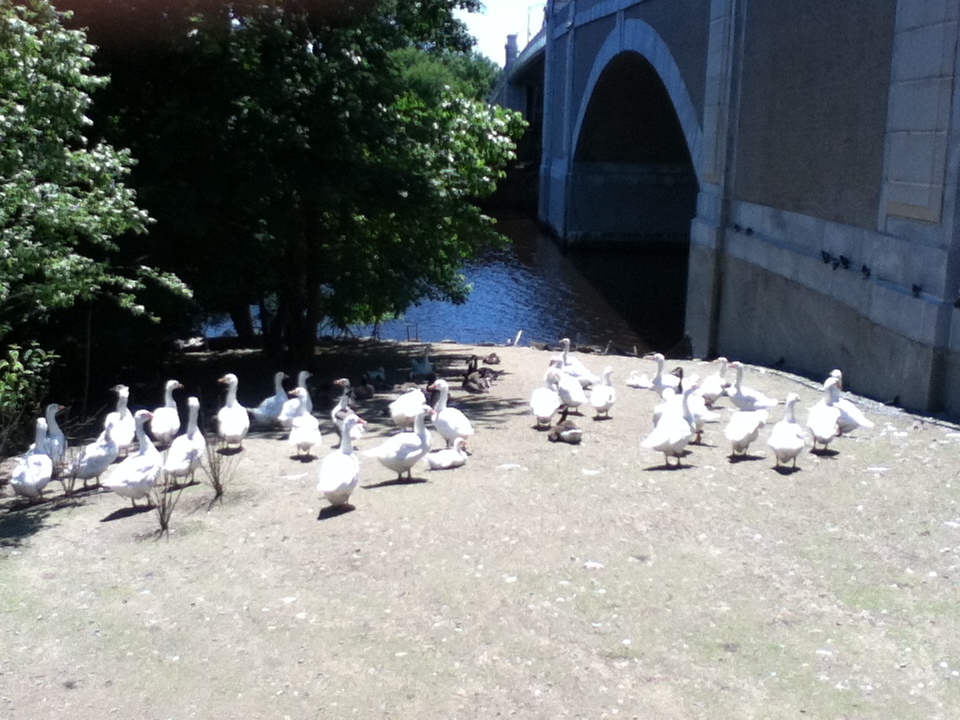 To the right is the BU Bridge. The blue is the river going under one arch.

They probably moved into this area to get away from the commotion associated with the moving of the trailer, plus because of the area destroyed to them with the increase in irresponsible parking.

As I was leaving, folks from the Charles River Urban Wilds Initiative came to feed the Charles River White Geese to protect them from the starvation being imposed by bizarre actions of city and state made possible with the hypocritical assistance of the Cambridge Machine.

Yesterday, June 15, 2013, the state bureaucrats in coordination with the fake groups conducted a games event in the area west of the Magazine Beach playing fields to which both entities want to expand destruction, with downright corrupt tactics on the part of the Cambridge Machine.

The purpose of the effort would appear to make folks favorable to the latest expansion of the state and city’s outrages on the Charles River.

The Machine showed off their historical building and, as usual, lied through omission about their environmental destructiveness in conjunction with Cambridge and the state bureaucrats.

My not yet published report on this outrage was posted at http://charlesriverwhitegeeseblog.blogspot.com/2013/04/the-charles-river-corrupt-practices-and.html in the form of a letter to the editor of the Cambridge Chronicle. It has been censored.

I hung around at the con game for a bit to reflect reality until I realized that, while there were quite a few people at the con game, pretty much all of the folks were part of the converted. There was a news type photographer running around. Her comment indicated that she could be part of the Cambridge Chronicle crew with its publicizing of the con games and suppression of reality.

I did have some valuable talk with a few folks but the real numbers of people not already controlled by the Cambridge Machine were tiny.

The reality in Cambridge is the existence of a massive machine which routinely rubber stamps while lying that they are holier than thou. They stay in power by agreeing on key lies which are foisted on the vast majority. Since all these fine people say this is true, it has to be true?

See my note at the bottom on one very blatant lie being propounded by the Cambridge Machine and its friends on the key Urban Ring rapid transit proposal.

I figured there was a lot more value in visiting the Charles River White Geese, so the above report.

Turn your back on them and walk away fast.
Posted by Friends of the White Geese at 4:58 PM