The situation is getting much more clear in the relocation of Harvard Medical School to the off ramps and rail yard at the Massachusetts Turnpike (I90)’s exit in Allston.

We now have word that the container yard facility in the rail yard has no containers for shipment, a definite indication that the yard has moved to Worcester, MA, which was the plan of the railroad.

The exchange came in response to my last post on this blog which, in abridged form, was published on the Charles River White Geese Facebook page. That exchange is below.

2. Photos of the Rail Yard a year ago.

A year ago, I posted photos of the rail yard and its maintenance yard, from Memorial Drive, which is north of the facility. 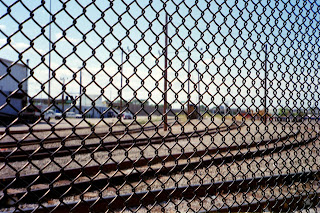 I have now repeatedly published the following photo taken from the Harvard Gazette report, of the tracks south of the facility.


None of these photos show the container yard itself which is the subject of the communications. I am sorry about that. I hope to get some myself and would love to get and publish correct photos, as I did on the Longfellow Bridge destruction, from folks who beat me to the area and get photos.

In my last report, I passed on Massachusetts Governor Patrick’s announcement of the straightening of the Mass. Turnpike (I90) with a resultant release of significant acreage for development. He neglected to mention (they always neglect to mention) that the only beneficiary is Harvard University. Please see http://charlesriverwhitegeeseblog.blogspot.com/2013/10/massachusetts-governor-announces-first.html.

I have repeatedly reported on Patrick’s efforts to destroy hundreds of trees on Memorial Drive on the north side of the Charles River to accept passenger vehicle traffic currently going through the Mass. Pike exit owned by Harvard University. Details are in that report along with links to state legislative emails.

In my next report, hopefully, I will go into part of the efforts of Cambridge pols to assist in the destruction. This is of Councilor / State Rep Toomey’s bragging of part of it in the lie of a bike path which will very quickly (not mentioned of course) be replaced in the key, Charles River, portion by the relocated off ramp.

This is edited. The reporter is a friend from my professional acting efforts. He, and I, improperly went into a movie I auditioned for last week.

The reporter is James Tighe:

Thanks. You are raising a good point and, apparently are more up to date on the yards than I am.

Harvard bought them on condition that Massachusetts may continue to use them for transportation uses.

Straightening the Mass. Pike out with that language from the Governor sounds deadly.

The railroad plans were to move the yard function to Worcester. Perhaps they have gone forward.

I post these reports on three sites. I have intended another subject for the next post but, as I said, you are raising an excellent point.

The other ongoing issue is whether the yards would be used for daytime storage of trains going in to South Station. The governor's announcement clearly says no, but could yards be fit in with straightening? Highly unlikely, based on the governor's comment.

There are no rail cars there and the tracks look rusted.

Wow. I guess I need to go by there.

I also remember when the Seaport area was nothing but rail yards. I went to see a "rolling" display of Titanic stuff on a rail car there. I hadn't been married long so it had to be the late '70s the yards were still there

The Boston cop drama showed those very heavily and the change is dramatic. Now there are still tracks there but they make big noises to the extent they are using them

The ones I saw Bob were in the bend of the MASS Pike and served to load and un load containers. And put them on tractor trailers. That yard is empty now.

[James and I got side tracked on acting, with a confused comment from a third friend of the Charles River White Geese. I apologized and summarized as follows.]

James is a friend from acting and he went off the subject. I will selectively delete the off subject posts, but I first want to record things.

He is presenting very valuable input on related matters.

The real game on the Charles River is that the environment is being destroyed for the benefit of Harvard's expansion in Allston. The governor's announcement admitted helping Harvard's without mentioning Harvard.

Harvard owns the Mass. Pike exit in Allston and plans to move its Medical School there.

A very key part of the move is to move the Mass. Pike off ramps to Cambridge by the Grand Junction Railroad Bridge which runs through the home of the Charles River White Geese which the powers that be have been heartlessly attacking.

A further key part is the destruction of hundreds of trees between Magazine Beach and the Longfellow Bridge, straightening out Memorial Drive to take the traffic from the Mass. Pike.

James' most important point was that it looks like the rail yard is empty of rail yard use. The plan was to move the facility to Worcester to open it up for Harvard. Apparently it has been moved.