Here are a few photos from Saturday, March 8, 2014, at the Destroyed Nesting Area of the Charles River White Geese. 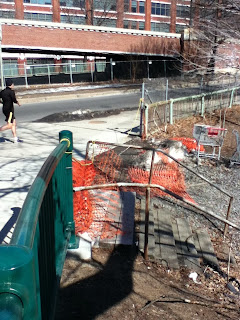 The entrance to the area is blocked as more starvation tactics, supposedly, I presume, as safety, but they are being deliberately starved by walling off their food for most of the last 33 years, and it is only humane to allow them a little bit of food across the on ramp to Memorial Drive.

When this opening was created, it was definitely negative for the reason why the closing is up now, for safety reasons, but the ongoing starvation tactics definitely changes things. The blocking will be taken down, obviously, when something more harmful is done.

In addition, the Charles River White Geese are careful jaywalkers. They stand on the side of the ramp until it is safe to cross and only then do they cross. The drivers love them, as do all decent human beings. The negative to their crossing is that they are geese. Once they start crossing, they do tend to meander.

The Charles River White Geese look for what food there is in the remnants of the supposed “amelioration” for the BU Bridge project. This area looks bad. The real bad area is the area that was not damaged by the BU Bridge project. That is the area with the massive destruction of ground vegetation by the Charles River “Conservancy”. The CRC destruction was made worse in the last year by railroad workers and “unidentified” people who came after the railroad workers and made things worse.

Then again, the introduced vegetation that is thriving could very well be yet another example of the outrage at Magazine Beach: bushes which are allowed to grow and grow and grow, blocking movement between the Charles River and Magazine Beach there, and destroying even more of the Destroyed Nesting Area for the permanent residents here.

The area in the middle of the first photo is a small portion of ground vegetation which was neither destroyed by the Charles River “Conservancy” nor by the BU Bridge Project nor by other, various irresponsible workers.

Undestroyed native vegetation, this and others, is consistently the best stuff in the area, and will once again be that when spring comes. 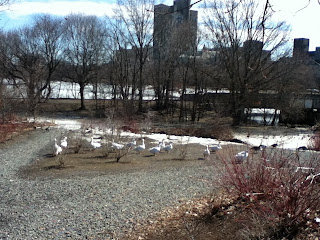 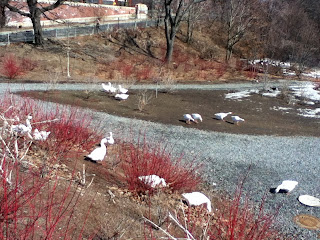 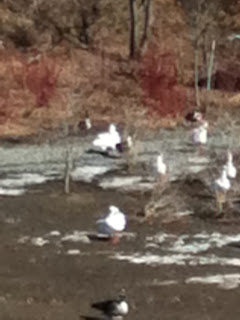 Passing these photos on in spite of lack of quality.

The white blur is a Charles River White Goose flapping his wings. The two other figures are Mallard Ducks. 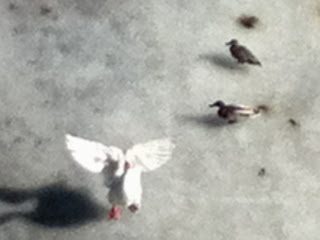 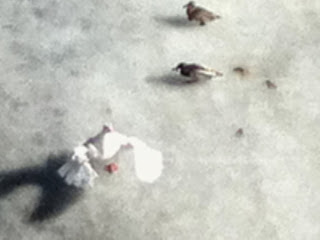 Posted by Friends of the White Geese at 2:23 PM