Mass. Pike over Charles River: The Cambridge side. Plus Update of Series.

Mass. Pike over Charles River: The Cambridge side.  Plus Update of Series.

This is the fourth in a series of reports on presentation of the Massachusetts Department of Transportation (MassDOT) concerning MassDOT’s ongoing work on rearranging the Massachusetts Turnpike (I90) on the Allston (Boston) side of the Charles River.

Prior reports were printed as follows:

c. Rejection of Cambridge’s initiative to run a highway over the Grand Junction railroad bridge. over the Charles River.  http://charlesriverwhitegeeseblog.blogspot.com/2014/09/mass-pike-over-charles-river-massdot.html.

2. The Cambridge Side of the Charles River.

Here are a few photos of the area which is the foodless prison of the Charles River White Geese.  It used to be their nesting area.  Their home and food for most of the last 33 years at Magazine Beach has been blocked to them by the outrages at the Magazine Beach playing fields.

The state (with the obvious general support of key planning staff in Cambridge) has destroyed as much ground vegetation in their prison / former nesting area as it can get away with.  The Cambridge Conservation Commission has been helpful within the severe limits of its jurisdiction. 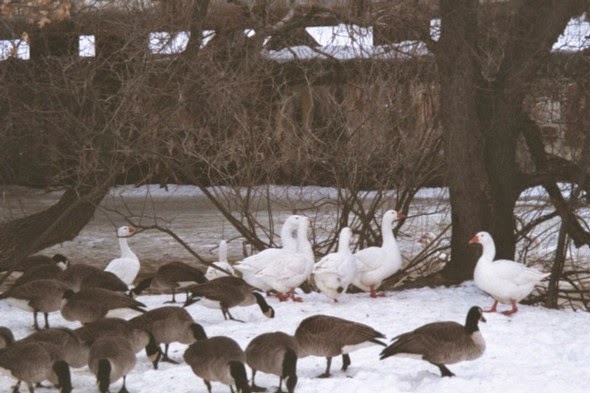 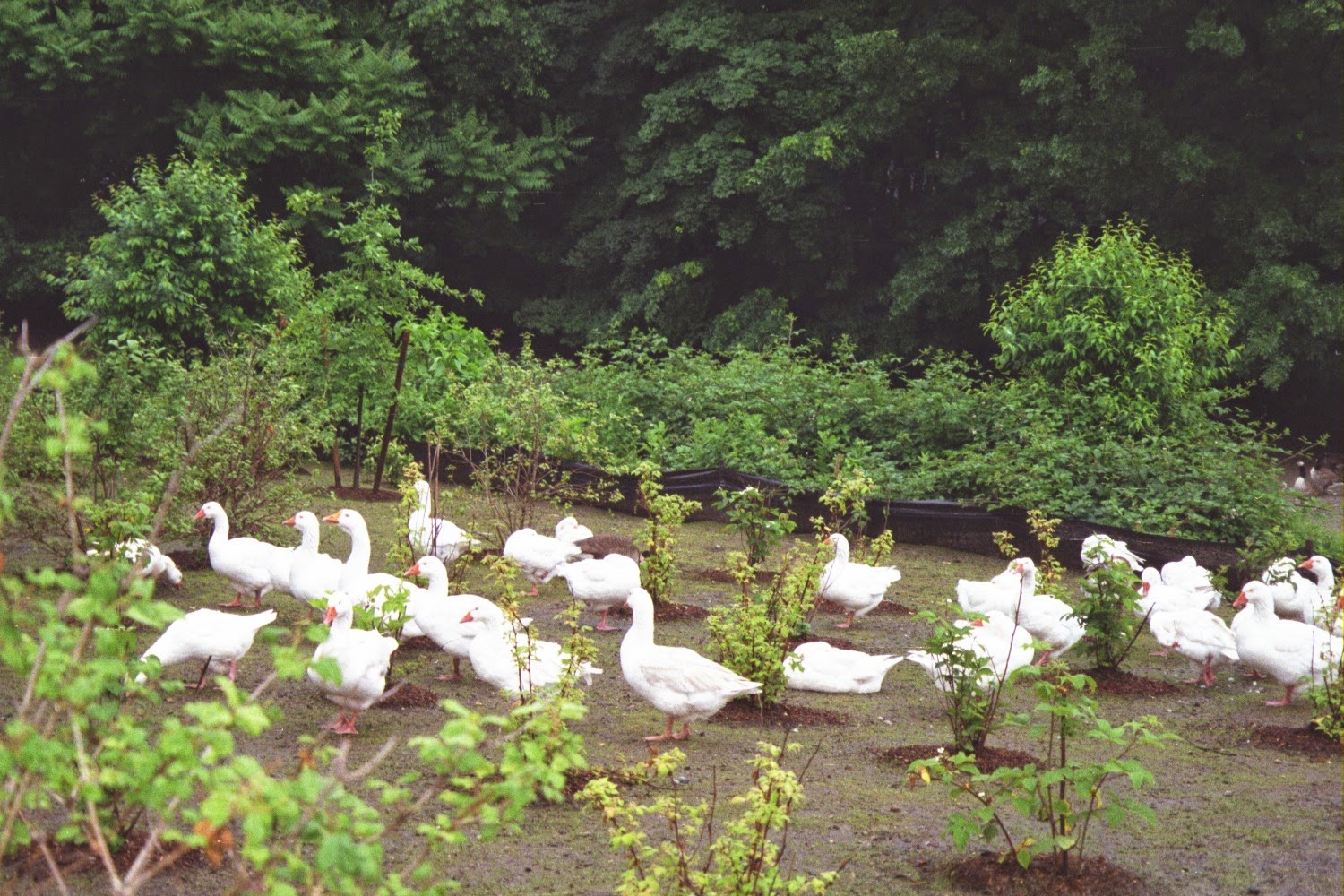 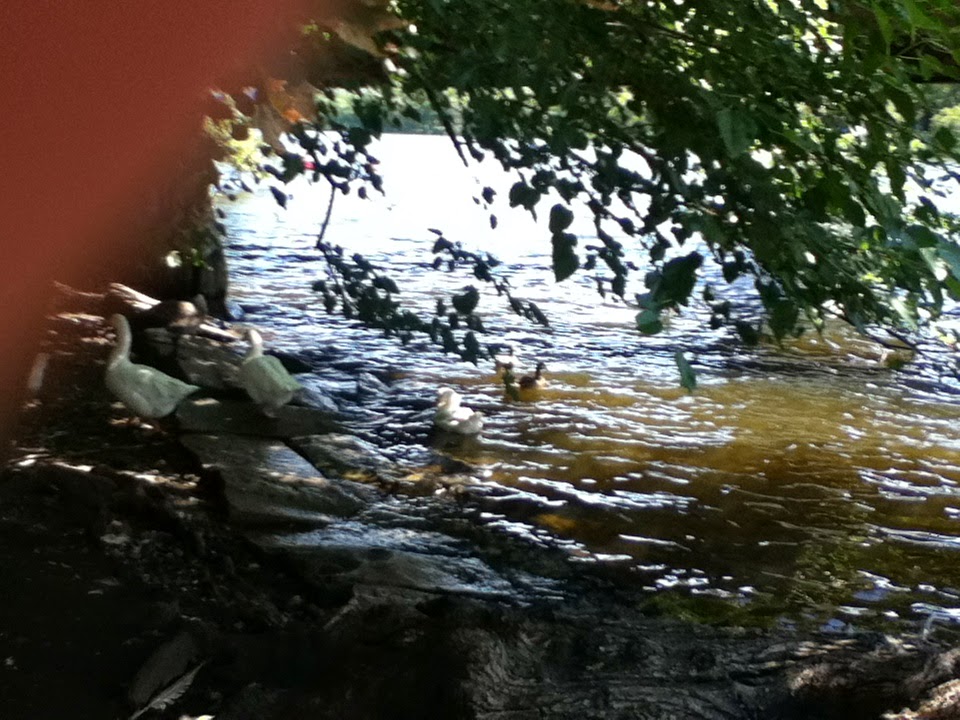 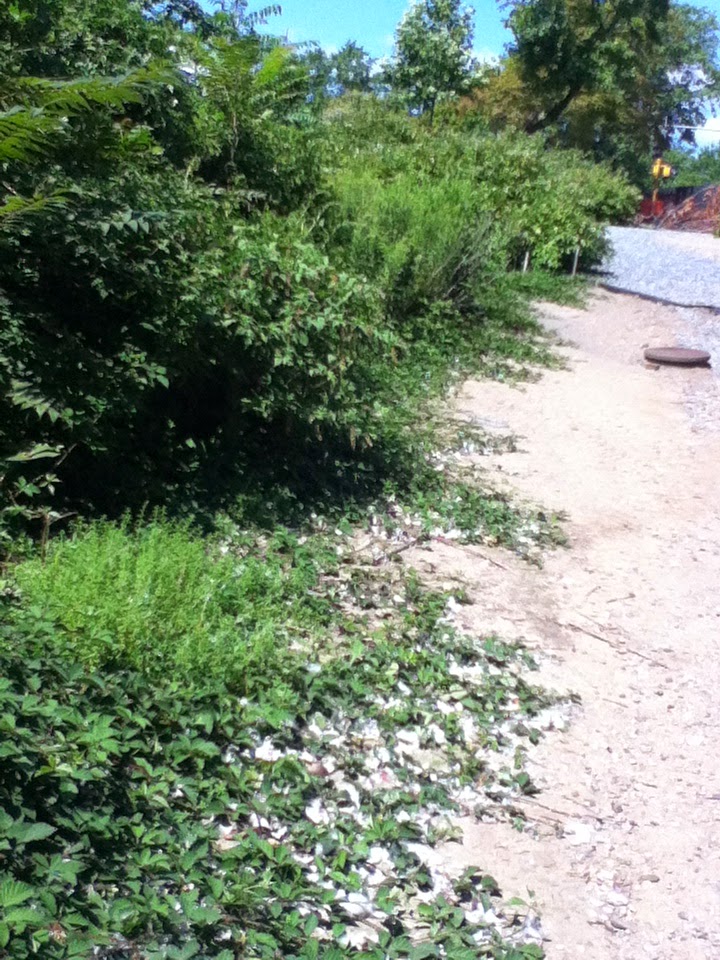 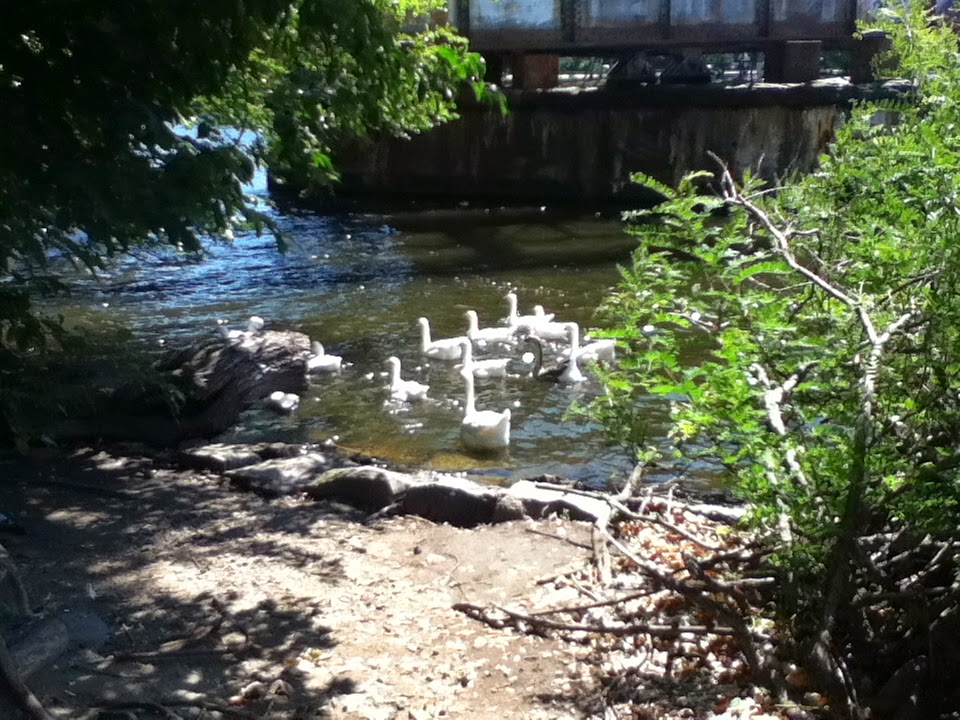 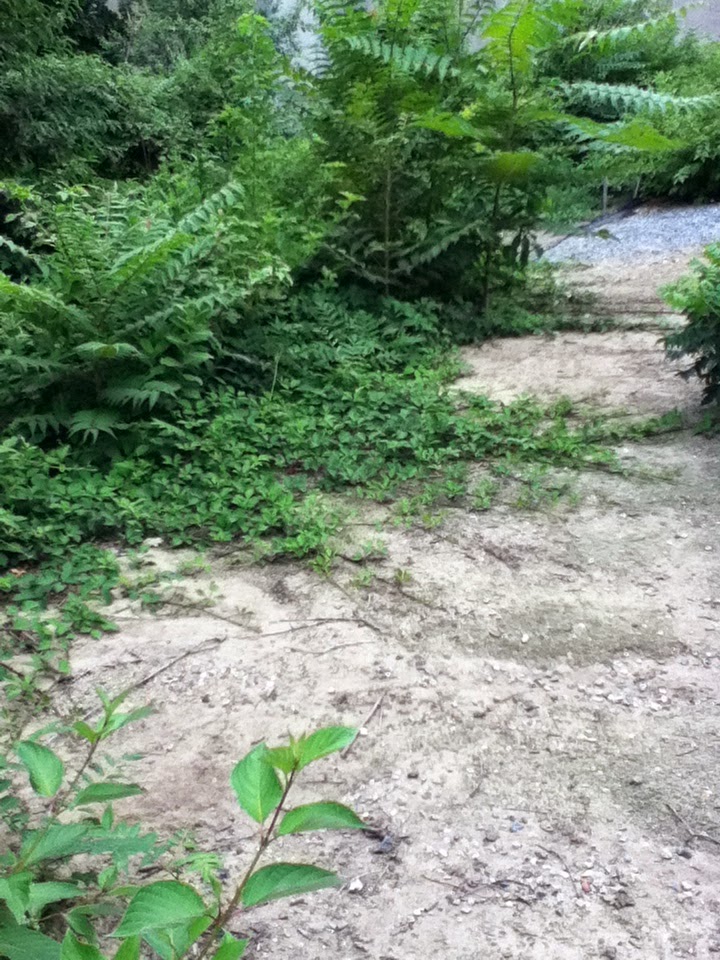 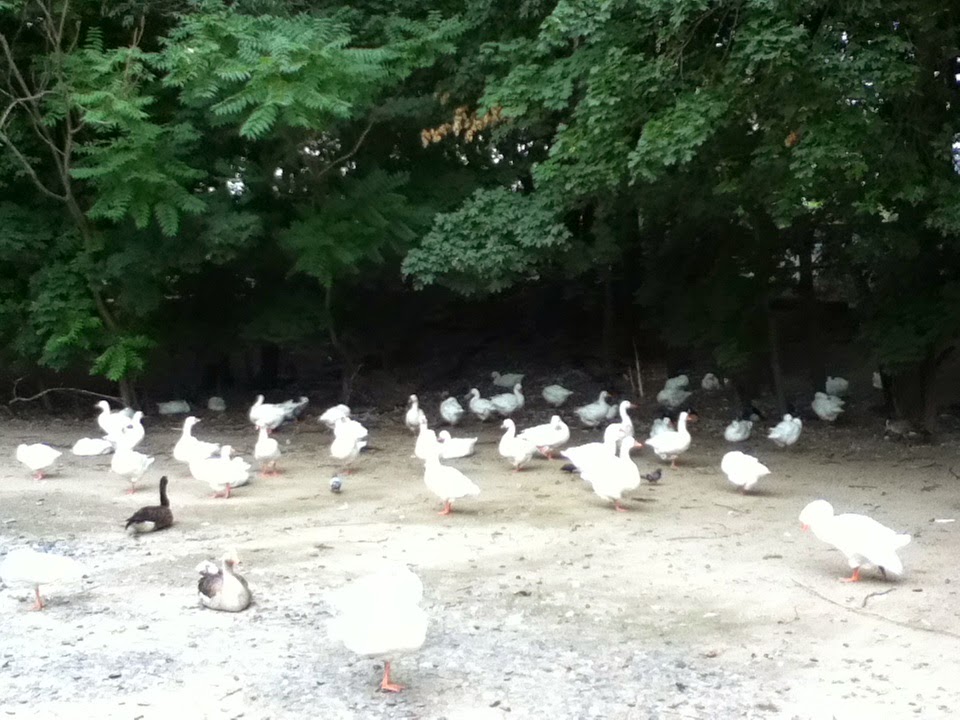 This is the area targeted for a bicycle highway by the plans under consideration by the Cambridge City Council.  Their highway will include a fence blocking access by them to the other part of the wild area.  I went into details on this fence in the last report, on the highway to Boston.

This report overlaps a lot of photos provided in that report.  I will not go over them again. (1.c, above).

The area on the far side of the Grand Junction railroad bridge is further animal habitat to which the Charles River White Geese have been forced to go to get protection for their nests after the Machine destroyed their ground vegetation in the Destroyed Nesting Area.

Cambridge and the DCR are starving the Charles River White Geese.

Cambridge’s plans would build a fence separating the Destroyed Nesting Area for the balance of the animal habitat.

Here are two photos of the building between the Grand Junction and Vassar Street. 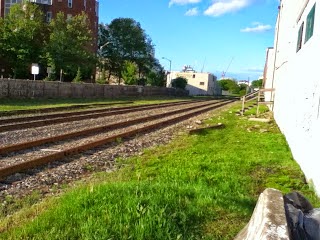 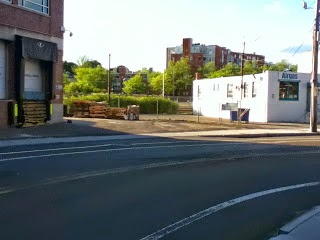 They go to Memorial Drive by this route and they have achieved their goals without increasing the heartless animal abuse they have inflicted on the Charles River White Geese, with a lot less expense, and with a much shorter route for the bicyclists and pedestrians. 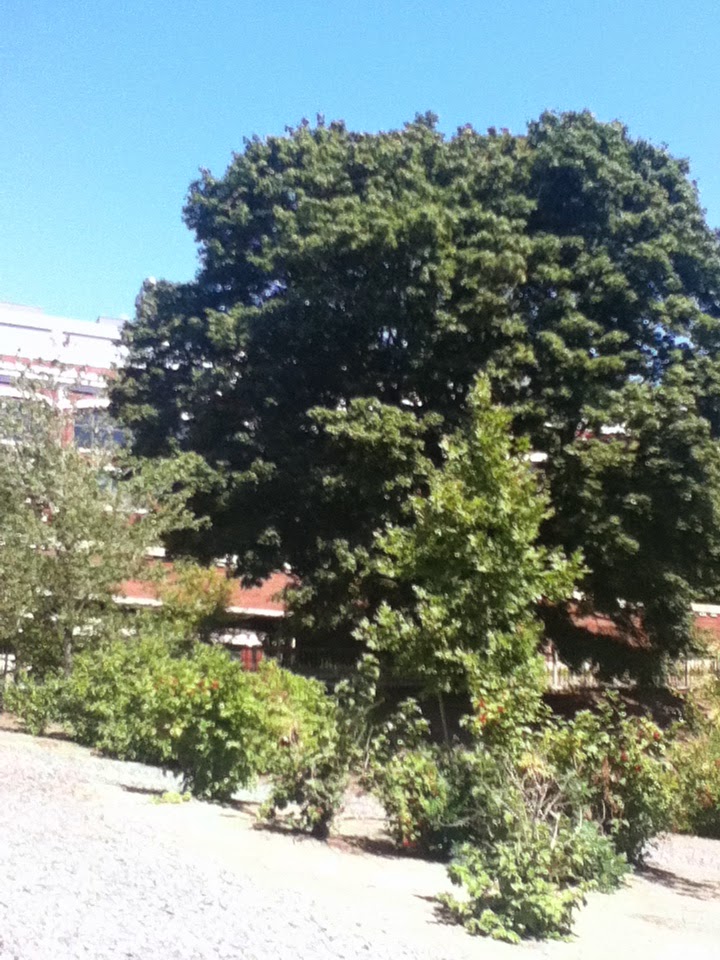 The woman leading the con game to keep people from protecting the Charles River was flat out shocked when I pointed out that she was destroying this excellent tree.  She has persisted in her con game without abate.

Then again, her con game is so without merit that the only question which exists with regard to her presentations in very controlled Cambridge Machine meetings is the nature of the excuse or other maneuver the Machine will use to prevent any and all response to her nonsense.

The tree destruction plans are posted at http://charlesriverwhitegeeseblog.blogspot.com/2014/04/tree-destruction-plans-charles-river.html.  The very first page is a cover sheet.  The next page is destruction at the Destroyed Nesting Area.  This tree is shown at the top of the plan and is clearly marked for destruction.

3. The position of the Cambridge City Council on their heartless abuse of the Charles River White Geese.

Here is a copy of an order seeking legal advice on the Cambridge City Council’s defending Cambridge from heartless animal abusers in traveling shows. 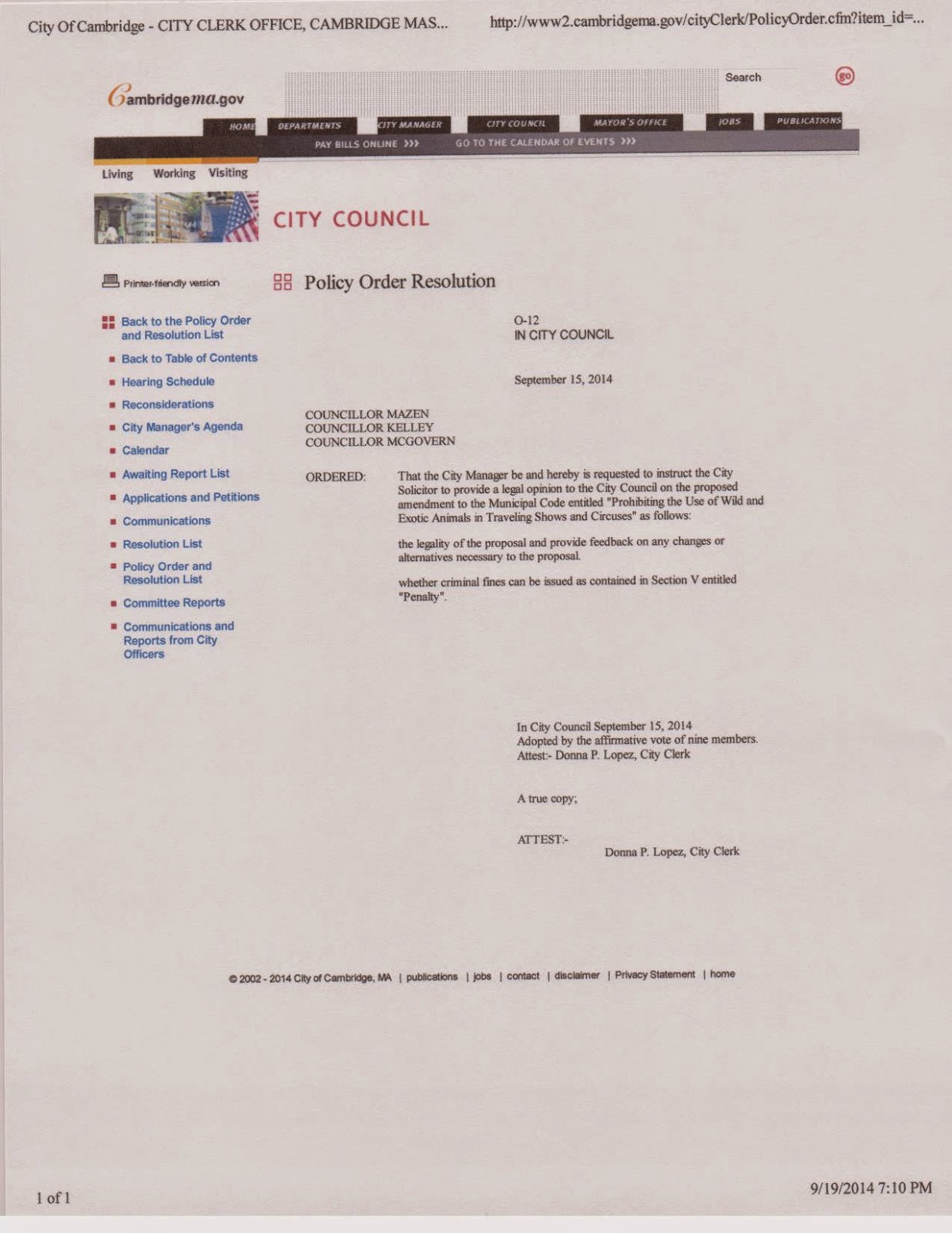 The reality is the ongoing heartless starvation of the 33 year resident Charles River White Geese by the Cambridge City Council and by the state bureaucrats who want to kill off all animal residence of the Charles River Basin or drive them away.

The reality is the destruction of 3.4 acres or more of the Alewife Reservation along with the same state bureaucrats along with an “unavoidable” pogrom of animals whose families lived in that area for centuries.  The reality at Alewife is that the current policies of the Cambridge City Council will likely lead to the total destruction of the Alewife woodlands and a further animal pogrom.

On Tuesday, September 23, 2014, the fake neighborhood association conducted a meeting which included presentations concerning the Massachusetts Turnpike project.  I will go into greater detail on that meeting in a later report.

However, there were two points made which impact this series of reports.

a. Green Line A Spur.

There was a comment that the existing viaduct in, at least in part, above Boston University property.

The comments of the speaker left me uncertain if the original announcement that the viaduct would not be moving closer to the BU buildings still applies.  I questioned the representative and was left uncertain on this issue.

Clearly, it is not the intent of MassDOT to do any land takings in the current project, and it seems that the existing viaduct is not only at the BU property line, it is at least partially over the property line.

This does not seem to change my idea that a Green Line spur could be placed between the two.  It would simply require the use of eminent domain, which is not unusual for transportation projects.

The possibility, however, of a stop for Boston University’s high rise dormitories and the neighboring arena could possibly bring BU’s support of the idea without a major fight.

Additionally, however, new direct subway transportation for BU to Harvard Square and the Red Line would clearly be in BU’s best interests, along with the improved service for this complex to downtown Boston in the other direction.

My report with photos on the possible Green Line spur is at http://charlesriverwhitegeeseblog.blogspot.com/2014/04/the-green-line-streetcar-light-rail.html.

The two key maps are in the second report of this series concerning the possible Green Line A spur, at http://charlesriverwhitegeeseblog.blogspot.com/2014/09/mass-pike-over-charles-river-possible.html.

b. Highway over the Charles.

Along with the MassDOT representative also appeared a representative of a Machine related group in Allston.  I have gone into an extended analysis of the machinations of these various maneuvered groups.  She fits the exact pattern.  As ever, it is impossible to comment on whether she is a true core person or just one of the many folks the Machine drags into its initiatives.

She confirms my understanding that MassDOT has killed the highway plans.

She, speaking from the usual sales pitch mentality, foresees resuming the fight in, I believe, three years.

So, from the Machine point of view, they are hoping to get around MassDOT.

Thank God for MassDOT.
Posted by Friends of the White Geese at 7:42 AM