The following letter from me was received by the Cambridge, MA, City Council on May 9, 2016

RE: Grand Junction Construction, Destruction of the Charles River.

First of all, several weeks ago, I transmitted to you a DVD going into the outrage being implemented by the Department of Conservation and Recreation and the City of Cambridge on Memorial Drive between the BU Bridge and the Longfellow Bridge.

The modified version, “The Destruction of Memorial Drive, Charles River, Cambridge, MA, ed. 3" is now posted on YouTube for greater convenience and broader distribution.  Its URL is https://youtu.be/h_u-woTPRJ8.

Secondly, concerning CMA 2016 #93, I got scared reading at least one of what appears to be a standard form based communication to you on CMA 2016 #93.  On looking into the matter further, it would be helpful if you described the city line to which to are constructing as the Somerville-Cambridge city line, and not the Boston-Cambridge city line under the middle of the Charles River, but the use of the word “Eastern” referring to the Grand Junction is helpful.

The really dangerous part of the Grand Junction proposal, as with so many proposals coming out of the City Manager Machine which has been in place since 1974, is the problem of lies of omission with regard to environmental outrages which should be presented front and center but which, instead, are hidden as much as is possible.

The last time I saw the Charles River end of the Grand Junction proposal, it continued the destruction which Cambridge and the DCR started on Memorial Drive in January into the Destroyed Nesting Area of the Charles River White Geese.  The problem is compounded by omissions in the destruction plans between the BU Boathouse and the BU Bridge which look like fraudulent attempts to place on notice of destruction by failure to mention.

To the right [ed: following in this reproduction] of the broader map is the CDD’s detailed map of the continuation of the Memorial Drive outrage into the Destroyed Nesting Area, the animal habitat between the Grand Junction and the BU Bridge.  So many trees are shown, but the trees shown, highly likely, would be trees paid to be installed by contractors after contractors destroy perfectly good trees, a maneuver the DCR brags about in the ongoing outrage. 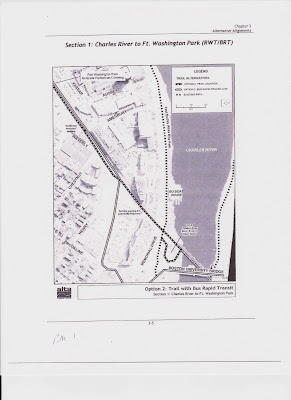 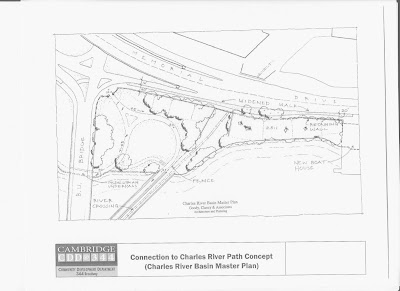 Here are some photos of the current use of the area between the BU Bridge and the BU Boathouse.  The photos were taken on April 30, 2016.  The dirt habitat has been artificially created by the DCR / its agents.  The crushed stone habitat has been the joint creation of the DCR and a group of irresponsible railroad workers who were very destructive, with clear consent of the DCR “manager.”  There are a lot of Charles River White Geese in the area nearest the BU Bridge.  They had been feeding on grass across the on ramp to Memorial Drive, but that was not consistent with the DCR / Cambridge starvation plans.  So the access to food was once again denied. 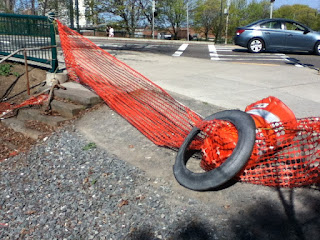 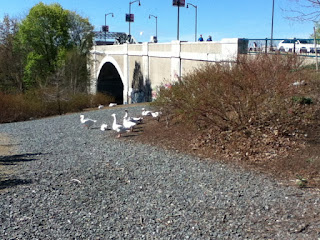 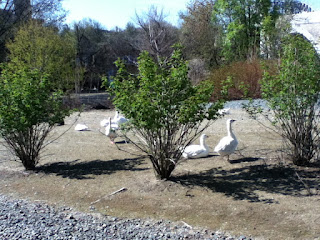 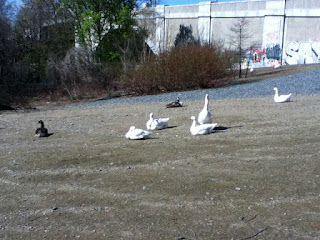 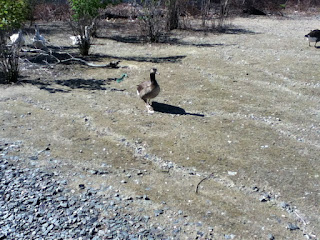 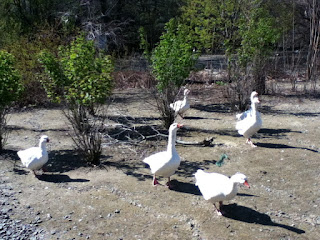 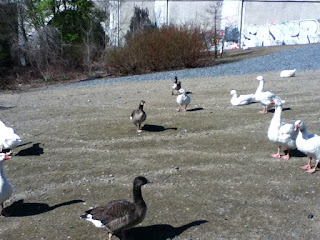 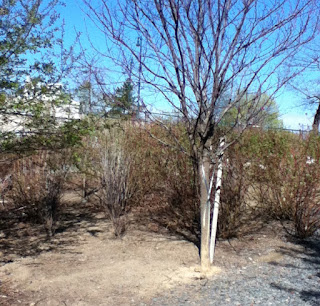 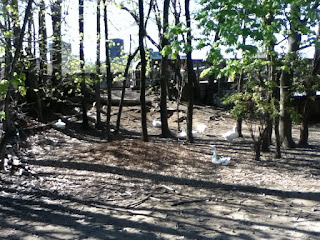 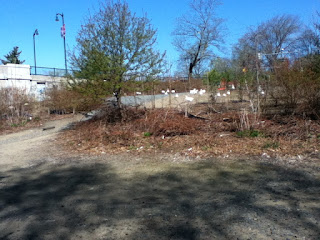 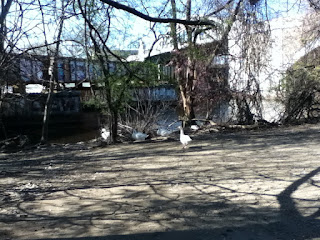 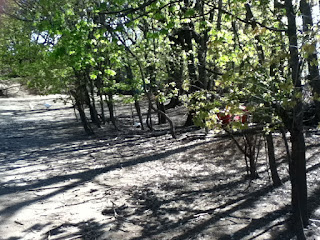 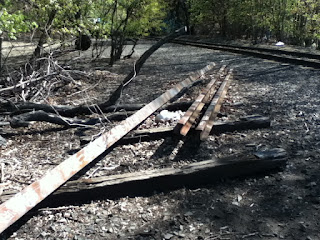 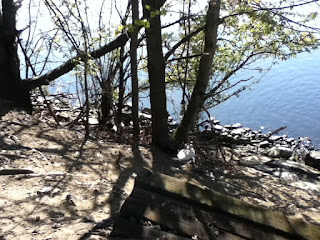 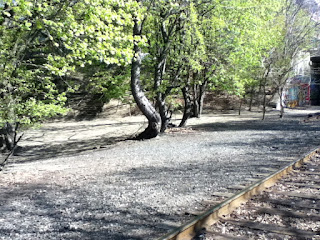 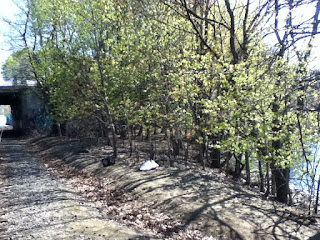 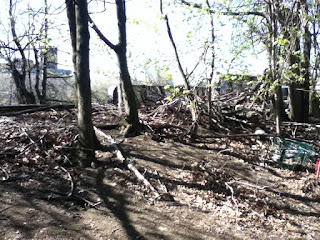 Much of this is FINAL WORK on the “remediation” of the BU Bridge repair project.  It clearly shows the level of lack of responsibility which can be expected to come out of the destruction of hundreds of trees in January.

You will note that the Charles River White Geese have been forced to nest in very precarious locations.  A major part of this need comes from the deliberate destruction of ground vegetation by the DCR and its friends / agents.  Some of the nesting to which they have been forced is between the Grand Junction and the BU Boathouse, the Wild Area which the relevant part of the destruction plans clearly call to be totally destroyed, by showing one undestroyed tree and nothing else where there are currently hundreds.  The destruction plan also could be calling for the destruction of all trees in the area where the J shaped highway would go, along with all trees on the river and next to the BU Bridge.

While the plan specifically calls for the destruction of an excellent tree at the on ramp, the omission of so many trees even on this side flags more proposed destruction.  A number of trees between the BU Boathouse and the Hyatt Regency on the river side were destroyed in spite of their not being spelled out for destruction in the destruction plans.  (See the YouTube video).  Cambridge and the DCR love to destroy trees. 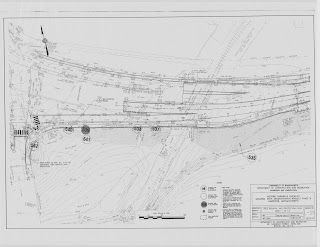 There has been very major deliberate destruction of the area by the DCR as heartless animal abuse furthering the starvation imposed upon the Charles River White Geese by the Cambridge / DCR destruction at Magazine Beach in the 2000s.  The fact that the current plans of Cambridge and the DCR make the situation at Magazine Beach worse make the situation that much more scary.

The stated goal of the DCR is to kill off or drive away all resident animals, and the DCR, with the assistance of the City of Cambridge could care less about the 34 year residency of the Charles River White Geese, and their very great Tourist Appeal.

Of very clear interest was a comment by the DCR manager at a fake “public input” session that the DCR stands ready and willing to transfer control of Magazine Beach to Cambridge in accordance with the agreement which was part of the 2000s destruction.  Clearly, Cambridge wants to be able to blame the DCR for the ever increasing outrages and deny, deny, deny Cambridge’s very real joint planning involvement.

Robert J. La Trémouille
Individually, and as Chair
Friends of the White Geese

The letter,plus one photo, duplicates the photos published in my report posted at http://charlesriverwhitegeeseblog.blogspot.com/2016/05/charles-river-springtime-in-destroyed.html.  This report contains all the photos.  The reason for the prior omission was technical.  The original photo was "portrait."  The software reported it as "landscape."  So the tree would have been shown lying on its side.  I have since edited the photo to make it square which was allowed by the software.

Posted by Friends of the White Geese at 4:33 PM