On September 15, 2016, at http://charlesriverwhitegeeseblog.blogspot.com/2016/09/charles-river-cambridge-extends-tree.html, I reported the City of Cambridge extending the destruction of trees to within sight of Cambridge City Hall.

Here are a couple of the photos.  The second was taken next to the undestroyed tree after the row of destruction in the first photo. 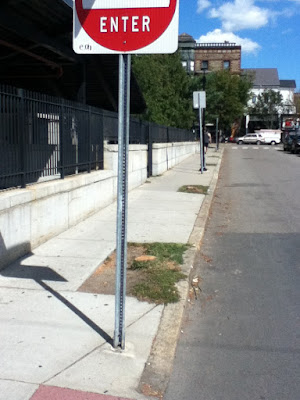 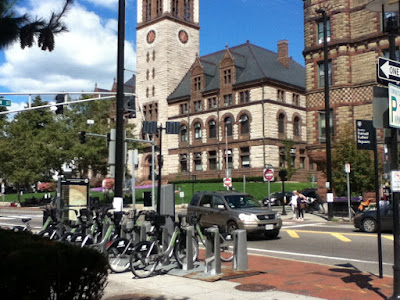 I find this outrage just a further step of a very destructive mentality which, in much larger scale, destroyed hundreds of trees on Memorial Drive next to the Charles River between the BU and Longfellow Bridges.  That situation was analyzed in my video posted at https://www.youtube.com/watch?v=pTplCCEJP7o.

Now we have saplings where were destroyed trees which were planted about 20 years ago.

The first photo shows the only tree in the block not destroyed, with City Hall the white tower with the clock and the building to its right.  The building to the left is the Central Square Post Office.  This photo shows one of the new saplings.  The second photo pretty much corresponds to the wasteland in the photo above. 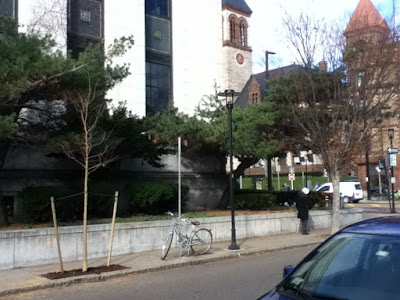 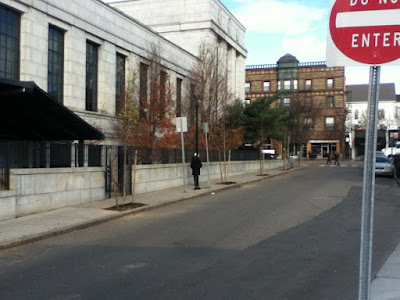 There are two ready explanations, one typically bad, the other perhaps good.

The bad explanation comes from the fact that a copy of the condensed version of the report, with two photos, was sent to every City Councilor.

To the best of my knowledge, although all of the city councilors were given notice with photographs, no action was taken.  And that is for an entire row of trees which extends almost within vision of Cambridge City Hall.  The following photo shows only undestroyed tree in that block with City Hall rising behind it.  This photo was included in my blog report and was in the condensed report which was emailed to all eight of the current city councilors who were in office then.
They simply cannot claim lack of knowledge.

There are markings on the sidewalk which give the impression of planned work, or, more likely, of some sort of construction under the sidewalk between the trees and the edge of the Post Office property.

It looks like, given that reality, that we are seeing just another aspect of the outrage on the Charles River: Contractors are given Make Work destroying perfectly good trees, and contractors are being given Make Work planting “replacements” for trees which should not have been destroyed in the first place.

PLUS the City of Cambridge benefits from another lie that Cambridge is environmentally saintly.  The replacements are that many trees they can claim in a lie that Cambridge deserves to be called a Tree City because the criterion for Tree City USA only counts trees planted.  It does not count which should not have been destroyed in the first place.

In addition, I am aware of at least one incident in which an entire residential block of perfectly good trees was destroyed to “improve” the neighborhood with saplings, and I have the definite impression that this was not the only such outrage..

The sales pitch is perfectly predictable: “How dare you object to our destroying that block full of healthy trees.  We put in saplings.”

English translation:  To Hell with the environment.  We have pleased our happy contractors, and we have a very active machine in place lying to the voters.

The situation on Cambridge streets and the outrage achieved and coming on the Charles River fits, demonstrating a decidedly reprehensible record.

And, oh yeah, this block adjoins an area where major work has just been completed.  Need I say more?

If this is the case, City Manage DePasquale is to be complimented.

Now how about firing the people who should not have done the destruction in the first place?  Particularly considering the fact that this outrage is not isolated.

Posted by Friends of the White Geese at 4:14 PM