I have been working from the formal plans submitted to the Cambridge Conservation Commission.  I knew, however, from the walk through that the Department of Conservation and Recreation had increased, allowing for fraud, the planned destruction to 54 from the previously announced 42.

At the walk through which the DCR conducted of its project, the DCR announced new and fancier plans.  I asked for a copy.  They did not want to provide me the new plans in hard copy, but the CCC prevailed.

It turns out that, WITHOUT MEANINGFULLY COMMUNICATING IT, the new plans include destruction of trees OUTSIDE THE ANNOUNCED DESTRUCTION AREA.  I call that Lying Through Omission.  Lying Through Omission was a standard tactic of the three past Cambridge City Managers when keeping secret environmental destruction.  The DCR does not, in my experience, live up to the level of the Cambridge City Manager Machine.

The new destruction is of trees which do not even show on the original plans as in the destruction area.

Here is the relevant part of the ORIGINALLY announced plan of the Swimming Pool area destruction. 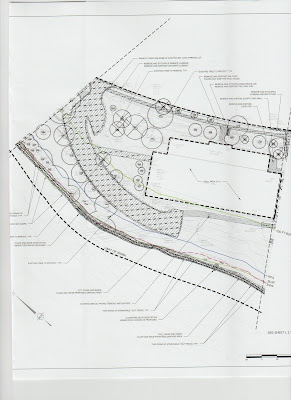 Here is the relevant part of the new destruction announcement. 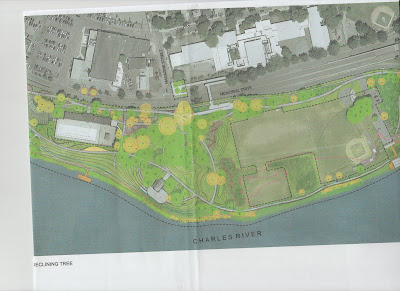 The secret destruction is ACROSS MEMORIAL DRIVE from the Swimming Pool.  You will note that on the original plan, you see a large, almost rectangle in the middle of the slide.  That is the support building for the swimming pool.  Above it, you will see a broken line.  That line is defined at the bottom of the plan as “LIMIT OF WORK.”  The upper portion of the line is the southern boundary of Memorial Drive. .

Here is a closer view of that part of the new plan:

The building next to the added destruction area houses a MicroCenter store.  In the new plans, the LIMIT OF WORK line continues to be the south side of Memorial Drive.  But the newer plan shows TWO of FIVE trees next to MicroCenter being destroyed.  They are shown in the upper right corner of this last map.

Destruction outside the LIMIT OF WORK area has been kept totally secret, but it was added in this fancy map very casually dropped at the Walk Around, and, of course, the expansion of the work zone was kept secret, unless you check out what amounts to fine print.  They most definitely did not divulge that the lovely new map included work outside the LIMIT OF WORK line.

Here is a photo showing the trees in front of MicroCenter.  It is a crop from a photo of the destruction not being kept secret.  I made the mistake of assuming a minimal level of honesty.  So, this is a crop of a side view of the Swimming Pool building.  I had the nerve to only do photographs of the area within the LIMIT OF WORK.

The red line around the doomed trees is yet another lie, this time a Lie of Fake Definition.

As near as I understand the fancy word, according to the DCR, using this lovely official sounding word, the DCR has a right to destroy any tree which has passed its peak beauty, NO MATTER HOW EXCELLENT THE TREE IS..

For a tree that would live 100 years, that means that the DCR claims a right to destroy it if it has “ONLY” 50 years left to live.  NO MATTER HOW EXCELLENT THE TREE IS.

As a DCR example of this outrageous claim of right, the DCR shows trees which are clearly dead which were among the trees planted in the irresponsible work in the 2000s.  Trees possibly died because the DCR is so irresponsible, so the DCR brags that this gives the DCR the right to destroy trees which have “ONLY” fifty years left to live, no matter how magnificent.

Oh year, the name of the fake protective group appears on the amended plan.

The planners from the MDC went to the DCR with their plans and, so far have destroyed hundreds of trees east of the BU Bridge based on those irresponsible plans.  Now they and their friendswant to destroy 54 trees west of the BU Bridge.

The DCR’s most important friends, the contractors, want money.  The DCR is feeding them with Make Work for Contractors.

That is the name of the game, and that is what the legislature tried to kill when it killed the MDC.

As far as Cambridge goes, first of all, the Cambridge Development Department is fully consulted by the DCR. Secondly, a bit over a year ago the last City Manager of the City Manager Machine conducted a public meeting at which the last Machine City Manager bragged about the great things the CITY OF CAMBRIDGE is providing on the Charles River.  Not by coincidence, that City Manager managed the destruction which was inflicted on Magazine Beach in the 2000s.

Hopefully, the new City Manager will have the spirit of a normal human being.  He seems impressive, and normal.

And, for the record, my video of the destruction already achieved is posted at https://www.youtube.com/watch?v=pTplCCEJP7o.
Posted by Friends of the White Geese at 11:44 AM