1. Turkey Sightings.
2. The problem.
A. BU Bridge to Longfellow Bridge.
B. BU Bridge to the River Street Bridge.
3. How to correct.

The Listserv censored by the fake group which has helped achieve so much destruction on the Charles River and is fighting for more destruction has reported an obvious result of their outrages, and, naturally, censored all comments concerning the reason for the result.

People on the Listserv in this, one of the most densely populated cities in the United States of America, have reported being faced with never before seen herds of wild turkeys on streets and sidewalks.  The folks reporting wondered how to respond to them.

The first and most important response is to end the plans to make things worse for resident animals.

The vile Massachusetts Department of Conservation and Recreation which is the major actor in the destruction has a policy of killing off or driving away ALL RESIDENT ANIMALS on the Charles River, insofar as it is politically possible.

Secondly, replacement of a terrible governmental situation MIGHT bring responsible people into control.

The problem is totally governmental, with terrible governmental behavior having its way smoothed by Totalitarian tactics from the government of the City of Cambridge.

A. BU Bridge to Longfellow Bridge.

The state DCR, the City of Cambridge and fake groups influenced by Cambridge, which claim to be “defending” the neighborhood, have destroyed hundreds of trees between the BU Bridge and the Longfellow Bridge  both crossing the Charles River, and destroyed massive amounts of ground in which those trees stood.  These same people are now fighting to destroy another 52 trees.  Most trees involved are / were excellent.

My video on destruction achieved this year is at https://www.youtube.com/watch?v=pTplCCEJP7o.  The video contains something like 130 component parts, including destruction plans and before and after pictures of excellent trees being ruthlessly destroyed.

The video shows a thick woods which has not yet been destroyed but which is on the plans for destruction, with the usual easily debunked lies.  The video shows other trees which have yet to be destroyed and are endangered.

Here is the area destroyed THIS YEAR.  The BU Bridge is barely visible on the left.  Two bridges to its right is the Longfellow Bridge.  Above the river is Memorial Drive.  The former location of hundreds of mostly excellent trees which were destroyed is on the median of Memorial Drive and between Memorial Drive and the Charles River. 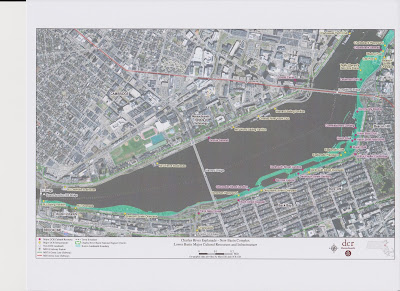 Habitat being destroyed includes the majority of land between the BU and Longfellow Bridges.  Habitat threatened includes that thick woods and the Destroyed Nesting Area of the Charles River White Geese where these terrible people have inflicted repeated heartless abuse on the Charles River White Geese, in addition to their deliberate starvation with increasing attacks in that field.

The video goes into the massive destruction proposed between the BU and River Street Bridges insofar as it relates to the accomplished destruction:   the continued dumping of poisons on the banks of the Charles River with obvious intent to expand everywhere, and the deliberate starving of the 35 year resident Charles River White Geese with a bizarre introduced wall of bushes at the Magazine Beach playing fields WHERE THE BUREAUCRATS PROMISED A “LAWN TO THE RIVER.”

B. BU Bridge to the River Street Bridge.

Understated plans, including fraudulent omissions, for tree destruction between the BU Bridge and the River Street Bridge are posted at http://charlesriverwhitegeeseblog.blogspot.com/2016/09/charles-river-latest-magazine-beach.html.  Later publication admits to even more tree destruction, ON BOTH SIDES OF MEMORIAL DRIVE, the boulevard which follows the Charles River to the north.

Unfortunately, lying through fake definition dominates the latter, more complete plans, so it is a waste of time passing this particular piece of fraud on to you.

Here is the area targeted next.  The first map is the state's plan of the area.  Targeted for destruction is the green area above the Charles River: 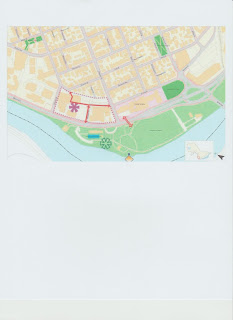 Here is the Massachusetts Department of Transportation’s satellite photo of the future home of Harvard Medical School and related, currently a former rail yard and I90 (Mass. Pike) with off ramps to Cambridge, the Allston - Brighton neighborhoods of Boston, and environs.

At the top of the photo, above the Charles River, is the area being attacked.  At the left is the River Street Bridge where local access to Cambridge is proposed to be made severely worse. 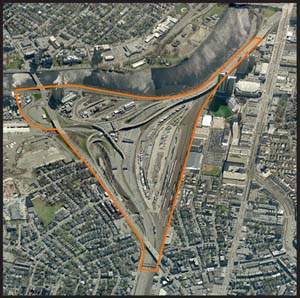 Allowing for obvious fraud and the increases subsequently admitted to, the added destruction runs to 52 mostly excellent trees, including 30 surrounding a historical building, abandoned for 80 years which is the focal point of the fake group.

The Cambridge influenced fake group, in established Company Union fashion, tells people not to look at the destruction they are fighting for.  They tell people only to look at that one abandoned building.

The impression communicated by the fake group for years has been that it is anti-Charles River to defend the Charles River.  Their pitch has been: you have a duty to only look at that abandoned building.

This mantra is being continued IN SPITE OF THE FACT THAT THEY ARE NOW FIGHTING TO DESTROY THE GROUNDS OF THE ABANDONED BUILDING, those 30 trees, and censor any and all comments to the contrary of their propaganda.

I have, to my distress, reported on the fake group system in place in Cambridge, MA, which is at the core of the problems of the beautiful Charles River.  The link is above.

It is a shame to have to mention the Totalitarian system in Cambridge which is inflicting regional and world destruction like so many other irresponsible governments, but thought control through this established system was dominant in the achieved destruction and is dominant in their plans to make things worse.

The legislature tried to protect the Charles River from destructive bureaucrats by destroying the Metropolitan District Commission which controlled the Charles River and dividing the MDC’s responsibilities between the DCR and the Massachusetts Department of Transportation.  The MDC “planners” moved to the DCR and are destroying unabated in the name of the DCR using their MDC plans.

The other problem has been a reprehensible city government in the City of Cambridge focused on a three City Manager regency which, for 42 years, has practiced as close to a Totalitarian dictatorship in Cambridge as they can get away with.  That City Manager Machine has been very strongly condemned by three levels of Court when it destroyed a female manager’s life because she had the nerve to fight for Women’s Rights in the management of the City of Cambridge.

The City Council has hired a new City Manager who is not directly in the line of Machine / Regency succession and who has sounded normal, i.e. responsible.

MassDOT is not perfect but the DCR and Cambridge approach being perfect in the wrong direction.

At the same time, outrages must be ended and reversed.
Posted by Friends of the White Geese at 1:21 PM