1. Phil Barber sees and reports:
2. Analysis.
3. Documentation of Part of the Record.

I took a walk along the river this afternoon where they’re “improved” things. Looking at the new trees I wondered if any would survive – and if they do, will there still be the likes of a dcr to try to cut them down when they reach maturity. Then it occurred to me that there may not be automobiles or Memorial Drive when those young oaks reach their peak; maybe the whole area will be a tidal marsh again.

There were unusual visitors today on the river, a pair of swans and their two young. I see swans often at Watertown and sometimes in Boston harbor but not so often down here. Here’s a pretty good photo of two of them 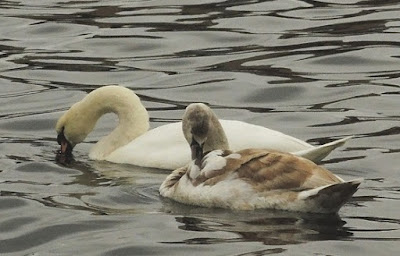 As usual, Phil is very astute.

Since the outrageous destruction, WITH MORE PLANNED, saplings have been planted.

Most of the saplings, in fact almost all of them, are in locations which should have been planted a decade ago.  To the extent some saplings have been planted in the areas of greatest outrage, the “replacement” is a horror show and nothing less.

Phil’s comment about how long will the saplings last before THEY are destroyed is exactly on point.  The hypocrites from Cambridge and the Massachusetts Department of Conservation and Recreation brag about numbers.  They neglect to mention that a very clear part of the plan is to yell “TOO THICK” a few years out.

At the same time, his reference to Global Warming is exactly on point.  The outrage on the Charles River is just part of the interlocking destruction of our world by mankind.  The big difference is the level of hypocrisy which is practiced in the key community, Cambridge, with its fake protective groups piously and hypocritically praising their destructive bureaucratic friends.

Correction of the irresponsible behavior should be two fold.

Next, the DCR must go.  The legislature tried to protect the Charles River and other sensitive locations from the reprehensible Metropolitan District Commission.  The legislature did part of the job.  The bridges went to the Massachusetts Department of Transportation.  The trouble is that the shores went to the DCR.  The destructive “planners” from the MDC moved to the DCR with their irresponsible plans and even exempted their irresponsible plans from normal reviews through another underhanded maneuver.

Dumping the DCR in favor of MassDOT will be a team effort that includes the legislature and the governor.

MassDOT is not perfect, but the DCR and the Cambridge City Manager Machine have approached being perfect in the wrong direction.

In this part of the Charles River, MassDOT has looked like the adult in the room with the DCR and the Cambridge City Manager Machine on either side as destructive brats.

But, thank you Phil.  Hopefully, the next outrage can be prevented, and hopefully we will get rid of the other part of the destructive bureaucrats who do so much harm to the Charles River, and do so much harm as part of mankind’s destruction of our world.

3. Documentation of Part of the Record.

My video of the outrageous destruction this time, with only a hint of what is scheduled to come next, is posted at https://www.youtube.com/watch?v=pTplCCEJP7o.

Posted by Friends of the White Geese at 7:06 PM