I spotted this unusual black squirrel in the doomed cottonwoods yesterday [April 12, 2017]. 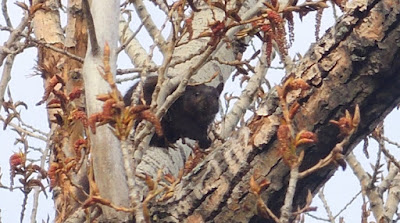 This destruction is all part of the reprehensible behavior which is the norm on the Charles River.

The fake protective group and the Cambridge City Council have the same explanation for this as they do for the hundreds of trees they just destroyed east of the BU Bridge:

My video on the first stage destruction of hundreds of trees east may be viewed at https://www.youtube.com/watch?v=pTplCCEJP7o.

My report on the fake "improvements" may be viewed at https://youtu.be/dWyCdcWMuAA.

My report providing the plans for destruction at Magazine Beach to the Cambridge City Council may be view at http://charlesriverwhitegeeseblog.blogspot.com/2016/09/charles-river-latest-magazine-beach.html,  Note that this plan includes fraudulent deletions.  There is a subsequent plan which repeats the fraudulent deletions and adds to that the fraud of word games.

And here is a photo essay of PART of the planned destruction:  http://charlesriverwhitegeeseblog.blogspot.com/2017/03/charles-river-reality-state-plans-and.html.
Posted by Friends of the White Geese at 4:03 PM