I discovered a pair of nesting swans in the small pond closest to the Alewife T station [on May 9, 2017]. The site is safe from humans and canines but accessible enough that I hope to be able to take photos of the whole process as it unfolds. First one is below. 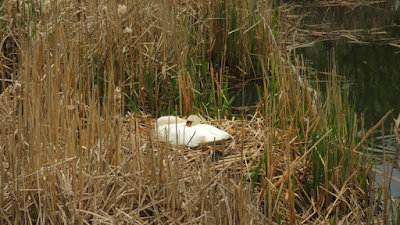 The Silver Maple Forest at Alewife is another environmental jewel, in addition to the Charles River, which government and controlled fake “protective” groups are fighting to destroy.

It is located among the terminal of the Subway’s Red Line at Alewife, the state Route 2 superhighway, and a railroad commuter rail line.

The Silver Maple Forest at Alewife is another, very terrible example of the environmental shame which is the Cambridge City Government and its very terrible partner in state government, the Department of Conservation and Recreation.

The City Council has spent years loudly lying of its concern for Alewife.

The Cambridge City Council created zoning which rewarded massive destruction of Alewife and then YELLED AT DEVELOPERS FOR OBEYING THEIR ZONING.

At the same time, the Cambridge City Council and the state’s Department of Conservation and Recreation destroyed 3.4 plus acres of the “irreplaceable Silver Maple Forest” [pretty close to their words.]

The excuse, other than make work for contractors, was for flood storage.  The lie is that the massive development which their irresponsible zoning has authorized by the zoning will certainly create a situation where storage is needed and there will be “no alternative” to TOTALLY DESTROYING the Alewife reservation for flood storage.

Responsible behavior would be to take easements under new construction for the flood storage which is desperately needed, with joint development in which Cambridge would pay for flood storage in excess of that needed for particular projects.

The game is the usual fake groups.

The leader of this blatant fake group ran around the city bragging about the destruction of 3.4 acres plus by Cambridge and friends.  I have begged one or more members of the group to throw her out of the group in order to have any semblance of credibility.  I have been faced with lack of understanding normal with victims of Cambridge’s fake group system.

The Cambridge Machine loves to get people chasing their tails.  Keeps them out of trouble.

Destructive pols love to have well meaning people fooled into thinking they are environmentally responsible.

“Friends” of the Alewife Reservation helps keep a very terrible government in power and destroying.

3. There has been a victory.

The Sheila Cook zoning petition, written by me, has saved a large parking lot between the Red Line Alewife Station and Route 2, and is returning it to nature.

Sheila was treated like crap by the fake activists.
Posted by Friends of the White Geese at 3:18 PM