Charles River: Sample of how badly the Cambridge, MA, USA, City Government is / has been, “conserving” Harvard Square.

Charles River:  Sample of how badly the Cambridge, MA, USA,  City Government is / has been, “conserving” Harvard Square.

The ongoing and increasing outrage on the Charles River is impossible to distinguish from the outrage which is the city council and key bureaucrats of the City of Cambridge.  The prior three City Managers were leaders of the outrage.  The outrage has continued after the departure of the last of the three bad City Managers.

A good feel for the outrage which is the government of the City of Cambridge, as stated, can be noted through the first two sections of a letter which was submitted to the Cambridge City Council and City Manager on November 14.  It has not yet been presented to the City Council.  I anticipate they will receive it at their next regular Monday meeting.

The Subsequent Section is directly relevant to the Charles River and will follow.  I can only make these reports so long.

I note that Awaiting Report 16-74 [ed: of the City Council Agenda] asks for a report on the Harvard Square “Conservation” District’s effectiveness.

I am very close to that matter since I wrote the zoning change which succeeded in modification of the zoning in East Harvard Square to make that zoning compatible with the residential  neighborhoods to the North and to the South.  I advised the neighborhood group with great success.  The C2B district [ed: the principal zoning in East Harvard Square] was suggested by Councilor William Walsh.  The Walsh suggestion received my enthusiastic support.  We only had one negative vote (1 probable supporter in the hospital) on a zoning change about which Harvard University was decidedly opposed.

This zoning forced the former Inn at Harvard building (Mass. Ave. and Harvard St.) on Harvard University.   The requirements of the C2B district were refined in the downzoning of the Dana / Hancock to City Hall area of Massachusetts Avenue so that this part of Cambridge reflects large scale zoning with great sensitivity to residential neighbors, retaining the residential nature of this part of Mass. Ave. [ed.: This is the one example of recent construction in Harvard Square which is generally loved.]  I was highly visible in that particular change.

I have 42 years experience with the Development Department under the three manager Cambridge City Manager Machine, [ed.: does not chastise the current City Manager] including very major experience in zoning myself.  In sharp contrast to too many initiatives by the Development Department and its Robots under the three manager City Manager Machine, my zoning does what I said it does.  Based on my experience, I interpret the request as to the “Conservation” District’s effectiveness on two levels.  It looks like the “Conservation” district has achieved both its real goals.

As such, there is a great deal of value in simply deleting this zoning.  It has passed its sunset provision anyway.  The continued presence on the books of this nonsense is an affront to people who want honesty in government.  It is most definitely not an isolated incident from the Development Department under the three member Cambridge City Manager Machine and its Robots.

Far less offensive an action is what Harvard did to the nearby 1890's historical building at 10 Mt. Auburn Street after I saved it in an action under a provision of the Rent Control Ordinance.  Harvard saved the exterior, and, in its later construction in the area, possibly built up the area in a more sensitive manner than Harvard would have done without 10 Mt. Auburn Street’s continued presence.  Nothing REAL was saved at Massachusetts Ave. and Remington Street.

Another very major change in the zoning in the area came in the early 2000's when, in the name of “improving” zoning, a citywide atrocity was accomplished by the Development Department and its Robots.  That zoning outrage trashed all the residential zoning in the City in favor of office districts which require more housing than office use.  Naturally, that was not meaningfully communicated to the voters.

That change, as part of destroying all residential zoning in the city, converted East Harvard Square’s residential district into an office district which requires more housing than office use in buildings.

This is not a tiny building, but it could have been much more intrusive and non residential.  It is the only recent construction in Harvard Square generally loved. 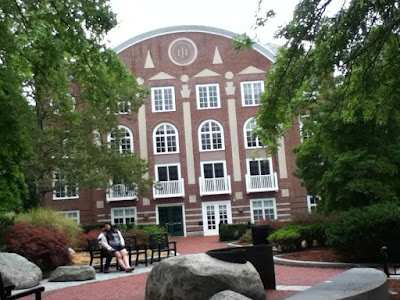 Those trees are on Harvard property and would not be there if built to the lot line. 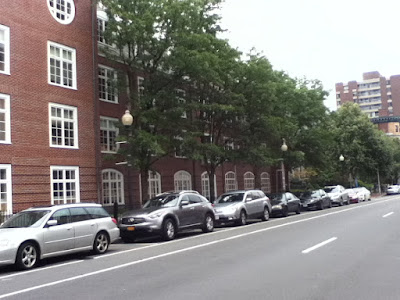 Here is the faux historical building which was the apparent purpose of the fake conservation district.  The historical building was destroyed, it would appear, primarily to add parking underneath it.  It is a copy of the original building above ground, with a floor added and and very significant added construction toward its rear (note the difference in style).  It is in the same block as the former Inn at Harvard, the far end of the block, three buildings to the east, Remington Street and Massachusetts Avenue.

The yellow building to the far right in the above picture is to the left of the faux historical building. 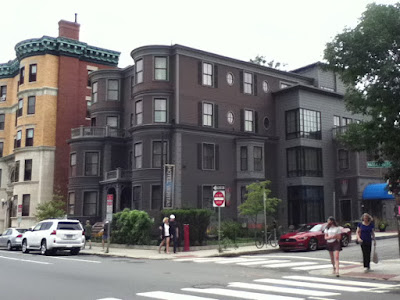 Here is 10 Mt. Auburn Street, maybe 1000 feet south of the faux historical building which pretty much faces it, with two buildings in between.  10 Mt. Auburn Street dates to the 1890's.  I saved it using fine print in the Rent Control Ordinance.  It was, instead, rebuilt in a “gut rehab” which is now highly common in the development of older historical buildings in Cambridge, MA, USA. 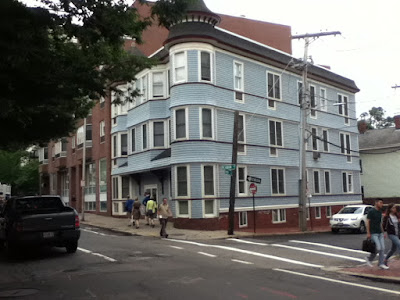 Here are historical structures on the south (opposite) side of Massachusetts Avenue between The Inn at Harvard and the faux historical building.  These almost certainly are being protected by the zoning I created. 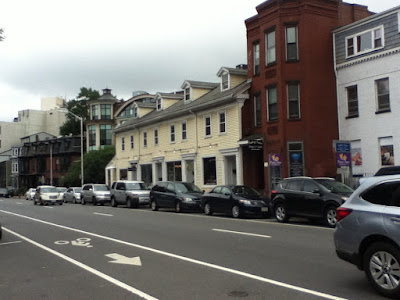 Not that visible is a replacement park on the left in the photo, almost across from the faux historical building.  The then Cambridge City Manager destroyed it about 10 days after the City Council passed our zoning.  Expansion was intended to expand a business which could no longer legally expand under our zoning change, which the City Manager opposed.  I leafleted.  The City Manager apologized to the City Council with this glorious, but necessarily tiny park.

Below is a slightly better photo of my lovely little park.

The building behind it we had to compromise on to get the downzoning.  The back side is kitty corner, albeit the top of a T intersection, from 10 Mt. Auburn Street. 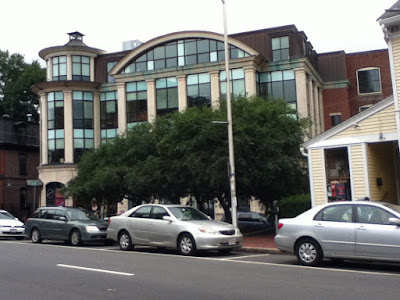 The photo of 10 Mt. Auburn Street, above, is taken from the direction of the back side of this building.
Posted by Friends of the White Geese at 3:38 PM