I have been spending a lot of time trying to -prevent destructiveness by the Cambridge City Council on another very visible front, Harvard Square.  I have to go over the meeting tapes of Monday’s meeting  to try to assess the greatest blame.  The short of it would appear that Cambridge’s bad city council is as destructive in Harvard Square as it is on the Charles River, but I need to review those tapes a bit more.

As has been common for too many years, fraud has been a too common tool for friends of the Cambridge Development Department trying to do things which normal people would deride.  The reality is that the operatives definitely look like the most guilty.

The trouble is that willful behavior by the Cambridge City Council puts the terrible things in place.  So, while friends of the Development Department with their outrageous behavior seem the instigator, the very terrible things cannot get done without a willful and destructive city council.

While I am reviewing the tapes trying to see if I can separate out levels of guilt in the current nine members of the Cambridge City Council in Harvard Square, I need to place in context the outrageous behavior of the seven carry overs  at Magazine Beach.

Phil has provided server recent reports, trying to put them in place with an excellent new tool found by him.

Afraid the tool wins out.

2. Excellent Drone Videos of the Magazine Beach Area and beyond.  General.

I normally try to let Phil’s reports speak for themselves.  This time, I have this excellent drone footage to do talking as well.  So I will try to integrate..

Someone's been doing some lovely drone videos of Magazine Beach. The aerial views are very enjoyable, put the whole river area on both sides in perspective.

Here are some links. The music is mostly terrible, unfortunately but the footage is spectacular

I have followed up with pleasure.  I ran the first and spent a lot more than its run time on appreciating it and trying to create stills which could be useable in these reports.  So here are two highly impressive stills with explanations that I hope will help people understand this particular outrage.

The first link is all I have reviewed so far.  Its title is From “Cambridge to Boston with the DJI Inspire 1, Drone Footage”.  Its running time is 13:54.

The creator can be viewed in control during the final seconds.  In later reports, I will identify the point in the running time a particular still is from.

I spent so much time on the clips that it comes as a pleasant surprise that two uncropped views, say very much what I got out of this particular post.

I definitely admire portions of Brookline (south of the Charles, with a very narrow AND CRUCIAL STRIP of Boston in between).

Key parts of Boston are more relevant than Brookline, although the Brookline views are very nice.

Key Boston views are Boston University and the rebuild of US Interstate 90 (Mass. Pike to locals).

In both stills are river views of destruction by Cambridge and the state Department of Conservation and Recreation.  Please double click them to get the best view.

Both views show major parts of the habitat of the Charles River White Geese as destroyed by self proclaimed environmentalists.

But here are, hopefully two key views which the reader may find helpful and I can follow up with details. 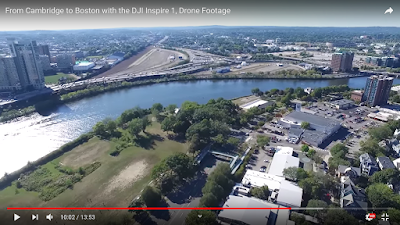 Before the destruction started by Cambridge and the DCR, the playing fields were the home of the Charles River White Geese all year except for really bad weather.

The thick woods just above the playing fields is targeted for MASSIVE DESTRUCTION, MUCH OF WHICH HAS ALREADY OCCURRED.  The building above the targeted woods is the DCR’s swimming pool.  This is followed by more excellent trees, much of which are being destroyed.

Moving to the right, at the very bottom is the top of Cambridge’s Morse School, an elementary school.  Directly above that school facing on the Memorial Drive boulevard on the other side of Magazine Street (barely visible) is a series of stores, a gas station, a MicroCenter Store, a Trader Joe’s and a building with less large uses including Starbucks.

Far up on the right, the biggie, is 808 -812 Memorial Drive, created as affordable housing.  I am not certain how much of it wound up as affordable and how much is market rate.

Above the Charles River is Boston.  Most visible is a recent Dormitory Complex of Boston University, the high rises.  The biggest highway following the water is I-90, the Massachusetts Turnpike.  It is being rebuilt because it is old and occupies too much space.  It is being moved to the left on top of the now abandoned railroad yards.  It will run against Boston University and part of Boston’s Allston neighborhood.  Next to and integrated with I-90 is and will be the state owned railroad system.  For our purposes, commuter rail is very important.

The massive triangle will include more civilized off and on ramps than is currently the case, PLUS HARVARD UNIVERSITY’S I-90 ALLSTON CAMPUS.

The first new resident has long looked like the Harvard Medical School.  That is located currently in Boston’s Back Bay the Red Sox’s Fenway Park and Kenmore Square.  It is part of Massachusetts biggest cash cow, the Longwood Medical Center.  The hospitals are expanding rapidly and using up what available space they had.  So things which can be moved appear to be moving.  Particularly the Harvard Medical School to the I-90 rebuild.

The dirty tricks going on in Cambridge’s Harvard Square give the impression that the Cambridge City Council is paying Harvard to move part of Harvard’s Harvard Square campus here.  By moving part of the Harvard campus, they are destroying much of the reason for being of Harvard Square which is one of the big tourist attractions.  As usual, everything is being done with maximum secrecy, so the best I can do is provide an educated guess.  Previous reports have gone into the ENCOURAGED destruction.

A major reason for my interest apart from the I-90 rebuild, is the fact that they are playing zoning games WITH ZONING THAT I WAS PIVOTAL IN CREATING.

To the far right on the Boston side is a hotel complex and the next Charles River bridge (after the goose centric BU Bridge), the River Street Bridge. 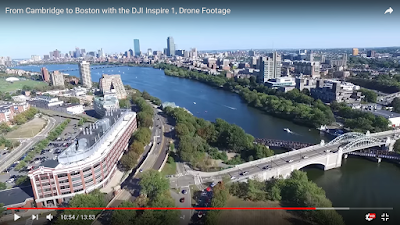 This comes close to being the opposing view to the one before.

Running under the BU Bridge is the Grand Junction railroad bridge.  It connects to the right to the triangle which is being converted into Harvard’s Medical School, dorms moved from Harvard Square and who knows what else.

At the bottom middle is a skillfully designed sewerage treatment plant.  Out of view below it is the Magazine Beach playing fields.

The area on the Cambridge Side just above  the BU Bridge is the Destroyed Nesting Area of the Charles River White geese.  The thick woods beyond it are planned for total destruction, a plan which the Cambridge City Council has skillfully managed to praise.

To the left is a large building which was a Ford Plant, then a Polaroid Plant, then a Massachusetts Institute of Technology Building, now a Harvard University building.

Directly above the building is the pyramid shaped Hyatt Regency Hotel.

From then on as far as you can see near the Charles River is, for the most part, the Massachusetts Institute of Technology.

After the boathouse AS FAR AS YOU CAN SEE ON THE CHARLES RIVER, is the area destroyed by the MDC and Cambridge in January 2016.

My analysis of the destruction is posted at https://www.youtube.com/watch?v=pTplCCEJP7o.  The plans called for destruction of the now doomed Wild Area and destruction in the Destroyed Nesting Area of the Charles River White Geese.  That destruction has been deferred apparently until after the destruction of 60+ mostly excellent trees at the Magazine Beach playing fields.

The destruction in January 2016 blocked off even more of the food of the Charles River White Geese by destroying their access to food on the river bank across from the Hyatt Regency Hotel.

The video reports on the hundreds of trees destroyed in January 2016, and the plans for the doomed Wild Area, the Destroyed Nesting Area and Magazine Beach.

I have spent so much time on these two pictures that I have to defer the rest of Phil’s report.

Save the Charles.  Save Harvard Square.  From really destructive state and city governments.

Posted by Friends of the White Geese at 2:37 PM