The powers that be in Cambridge, MA, USA, CANNOT achieve the very terrible things they are fighting for in the light of day.  So they keep on trying to sneak in their irresponsible behavior as secretly as possible.

The following communication attempts to bring in to reality YET ANOTHER IRRESPONSIBLE INITIATIVE.  Copy has been sent to the Cambridge City Council.  I would not be so silly as to expect responsible behavior there.  But, by putting it on record, the usual lie that they do not know what they are doing is made that much less credible.

There is one obvious typo in my communication corrected as stated.  The original communication was an email with two photos attached.  The photos are inserted in the appropriate location where the reference is in the letter.

RE: The latest outrage SECRETLY being pushed by destructive Cambridge Interests, Commuter Rail on the Grand Junction.

I am writing individually and as Chair of Friends of the White Geese, an Attorney General registered non profit defending the Charles River, its animals and environment since 2001.

Enclosed [ed:  inserted] is a photo of the most visible of the many free animals under constant attack by destructive people in Cambridge, MA, the Cambridge City Council and the Department of Conservation and Recreation.  These are the Charles River White Geese.  In the background of the picture is the Grand Junction Railroad Bridge, a key part of their habitat.  They have lived on the Charles River for 39 years.  For most of that period, their habitat has extended for a mile of the Charles River centered on the BU Bridge.

Destructiveness of the DCR, the Cambridge City Council, and their friends has restricted their habitat to an area which was their nesting area.  Massive destruction of vegetation, habitat and food has been to normal from these destructive people.

I further understand that very destructive people in Cambridge persist in trying to sneak through the I90 project the horribly irresponsible concept of Commuter Rail on the Grand Junction.

MassDOT has done a study on this matter which was PUBLICLY communicated and received strong negative comment.  MassDOT responded to that strong negative comment and to its detailed analysis which found that commuter rail on the Grand Junction would have no value to anybody except for Kendall Square developers.

So a bunch of destructive people are trying to sneak it through the I90 project which PUBLICLY has nothing to do with commuter rail on the Grand Junction.  EXACTLY WHERE THESE DESTRUCTIVE PEOPLE TRY TO SNEAK THINGS IN.

Such a project would be highly destructive to animal habitat, trees and the environment.

I have posted an analysis of these people’s “achievements” on the Charles River at https://www.youtube.com/watch?v=pTplCCEJP7o.  In January 2016, they achieved the destruction of more than a hundred excellent trees between the BU and Longfellow Bridge AS SECRETLY AS POSSIBLE, business as usual.

Currently they are fighting for and in the process of the destruction of 59+ mostly excellent trees at Magazine Beach.  Friends of the White Geese, of which I am chair, has strongly objected to this destruction in many communications.  The key letter publishes the Department of Conservation and Recreation’s destruction plans with photos of doomed trees.  That letter is posted at http://focrwg.com/agenda1.html.  Significant destruction has occurred.  Destruction of animal habitat at the banks of the Charles River has been SNEAKED THROUGH AS SECRETLY AS POSSIBLE in votes of the Cambridge City Council.

Related to this destruction, the key destroyer proceeded with poisoning the Charles River in December 2017, acting as agent for the DCR, WITH CAMBRIDGE ASSISTANCE.

In 2019 [typo in original, 1999], the DCR, Cambridge and the Charles River Poisoner achieved a declaration of a public health emergency based on this irresponsible behavior.  We summarized that outrage in our letter to the Cambridge City Council posted on line at https://charlesriverwhitegeeseblog.blogspot.com/2019/08/charles-river-poisons-algae-blight.html
.   The DCR’s bragging about the destruction is posted at https://charlesriverwhitegeeseblog.blogspot.com/2019/09/state-agency-admits-to-poisoning.html
.
The City Council letter versions of these blog posts were received by them at their meeting on September 9, 2019.

The City Council showed their opinion of the poisoning of the Charles River by voting funds to subsidize “environmental planning” by her which are initial steps toward destroying the excellent grove across from the MicroCenter.

I summarized after destruction the destruction of the Charles by the Charles River Poisoner at https://charlesriverwhitegeeseblog.blogspot.com/2020/03/developer-hated-non-paid-for-vegetation.html.

They are trying to sneak in further massive destruction between the BU Bridge and the BU Boathouse.  Destruction would include the excellent woods east of the BU Bridge.  That was included in the plans implemented in January 2016, but it was not done then.  A detailed analysis of this project is included in the video, link above, and at http://cambridgema.iqm2.com/Citizens/FileOpen.aspx?Type=1&ID=2121&Inline=True, pages 171 to 180.  The DCR conducted a fraudulent “public meeting” on the project announced as ending going east at the BU Bridge.  The slides showed it extending to this excellent woods.

The plans show EVERY TREE BUT ONE being destroyed in this woods. 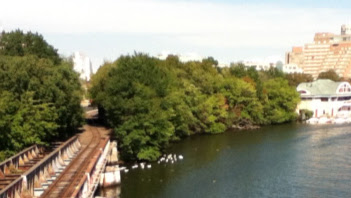 [ed:  not in original, but here are the plans] 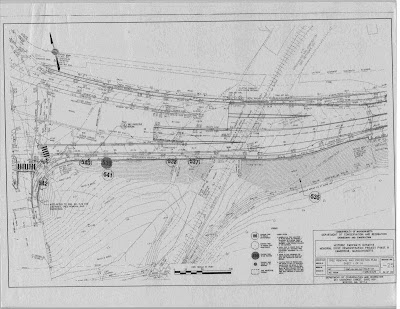 MassDOT has been often active as the adult in the room with two destructive children, Cambridge and the DCR.  The fight to sneak in this outrageous proposal have been part of that.

I have been active in the planning for the I90 project.  MassDOT is to be commended for standing up to repeated attempts to SECRETLY expand the scope of this project.

I have participated to stand up to the outrages from these very destructive people in Cambridge.  I have decades of experience in transportation planning by the MBTA.  I have two years employment in mid / lower lever railroad management with exposure to pretty much all aspects of railroading.

The I90 project has benefitted from my experience in two major positive changes:

MassDOT has resembled the adult in the room with two destructive children (Cambridge and the DCR) in very many Charles River issues.  The Charles River has greatly benefitted form the responsible, constructive behavior of MassDOT.  One of the most important areas of benefit has been killing the irresponsible initiatives of destructive Cambridge interests has been MassDOT’s standing up to outrages such as the current attempts.

By legislative vote, MassDOT should replace the DCR on the Charles River.  Removal of the DCR in favor of MassDOT would be a breath of fresh air.
Posted by Friends of the White Geese at 10:11 AM