More hungry wild Turkeys walk the streets of Cambridge, MA, one of the most densely populated cities in the United States, adolescents. 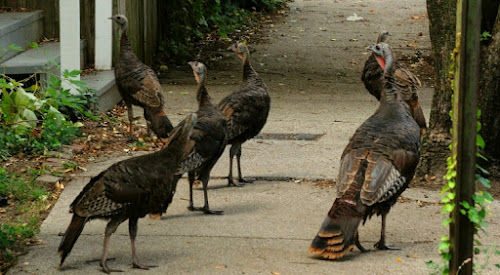 Then again, somehow, the public records of the Cambridge Zoning Ordinance claim to be accurate after the Harvard Square Upzoning, BUT KEEP IT SECRET.

The beginning of the key record on the Internet.  Note the version date near the upper left corner:

Wild comments about the destructive Harvard Square Upzoning passed earlier this year caused me to check out the public records.  These false comments came from the Harvard faculty member who was point person on the upzoning.  The comments came during discussion of outrages being sought by entities in the City of Cambridge in the I90 Rebuild project..  The pattern of comments  was normal from her during the discussion of the Harvard Square upzoning, highly indignant and false.

The version described as “accurate to April 30, 2020" is most definitely not the outrage passed by the City Council.  Without checking it out, I presume it is the less destructive predecessor.

With this FALSE information in City Records, well intentioned voters are being falsely told they have a responsible city council, while developers will go to the Development Department and learn the truth.

Combine this with the fact that the person who was key in obtain this destructive Harvard Square Overlay District vote is publicly telling the same lies as she did when fighting for the changes.  Also combine this with calling me a liar for truthfully communicating this outrage.

This latest nonsense came as she was fighting, also for the benefit of Harvard, her UNDISCLOSED employer, for irresponsible changes Harvard is apparently pushing for in the I90 rebuild project.  She described the most irresponsible of three alternatives as Harvard’s proposed “compromise.”  That is as false a description as her repeated descriptions of the outrages voted for by the City Council in Harvard Square.

The algae infestation created by the Charles River Poisoner is extreme and is the results of behavior she has publicly bragged about.  That particular outrage cannot be lied away.  So perhaps the Harvard Square Destroyer is taking her place as point person for destruction on the Charles?  I do not know.

What is clear is that the Harvard Square Destroyer is following in the paths of both of them by describing the destructive architects proposal as a “compromise” and as excellent.

MassDOT, on the other hand, has behaved in a responsible manner, as is very common with them.  The “compromise” being pushed by the Harvard Square Destroyer is very clearly the worst of three alternatives.  The MassDOT head has described this alternative as impossible to get through approvals because it is destructive to the Charles River.

In any case, I hope the City of Cambridge will stop lying about what is the Harvard Square Overlay District and, in the corresponding part of the Zoning Ordinance on line, publish the truly shameful version created by this City Council.

For the record, I have done a lot of zoning writing in the City of Cambridge.  More than half my initiatives have been successful.  My zoning documents, in contrast to common problems of the opposition, do what I say they do.

I am about 20 pages into my analysis of the responsible actions taken by MassDOT with regard to the I90 rebuild project.  It is coming.  I have been working on it since I finished the letter which I previously provided the City Council on this issue.  My letter has a lot of photographs, many quite beautiful.  That is a difference between me and the small group fighting for so many outrages.  I communicate reality.  The other side, like the city council, has a lot to hide.

For the record on the Charles, as well, I have two major victories in the I90 Rebuild Project.  Both benefit Cambridge.  One, probably aside from the various permutations of “The Throat,” is probably the most major change which has occurred in the project.  The other was a spin off of the first.  On the latter, I reversed the votes of both appointees of the City of Cambridge, once again with major benefit to the City of Cambridge.

Very clearly, however, FALSELY COMMUNICATING THE PRIOR VERSION OF THE HARVARD SQUARE OVERLAY DISTRICT as the existing zoning is the opposite of Good Government.

Posted by Friends of the White Geese at 10:14 AM