Congratulations to MassDOT Secretary Stephanie Pollack.  Effective January 27, she will be working for President Biden as his Deputy Administrator of the Federal Highway Administration.  She will function as Acting Administrator pending congressional approval of the permanent Administrator.

She will continue with MassDOT until January 26.

Secretary Pollack has been in office for six years, equal to the combined incumbencies of her three predecessors.

On the Charles River, she has stood up to the Cambridge City Council and destructive, empire building tax exempt institutions in Cambridge, and their friends.

Of major importance to the Charles River, I90 (the Mass. Pike) needs to be rebuilt in the portion which comes closest to the Charles River.  It is on a raised structure which is showing its age.  The powers that be are trying to accomplish outrages in Cambridge which they have failed to do, thanks to MassDOT, when they have tried to accomplish them in public.  So they have tried to sneak the dirty stuff through as secret amendments to the I90 rebuild.

The con game is a bikeway which allegedly is the reason for doubling the size of the Grand Junction Railroad Bridge over the Charles River.  It is no coincidence that, in 2003, the public transit agency proved that the bridge could be widened to create a working off ramp from I90 to Cambridge’s Kendall Square / Massachusetts Institute of Technology.

The governor has recently announced that a lot of savings are needed in the rebuild project.  Even standing up to the off ramp to MIT, a lot of money can and should be saved.  Another part of the empire building sneaked in is a personal Commuter Rail stop for Harvard University next to the rebuilt and I90.

Secretary Pollack is being temporarily replaced as MassDOT Secretary by Jamie Tessler who has wide experience throughout the department.

This report is based on materials from the MassDOT Blog on line.

Here is a still from  “From Cambridge to Boston with the DJ Inspire 1 Drone footage,” posted at https://www.youtube.com/watch?v=sN-OmMzvHhw, minute 1.59, showing I90 on the bottom and the world under most direct attack by the Cambridge City Council and friends on top. 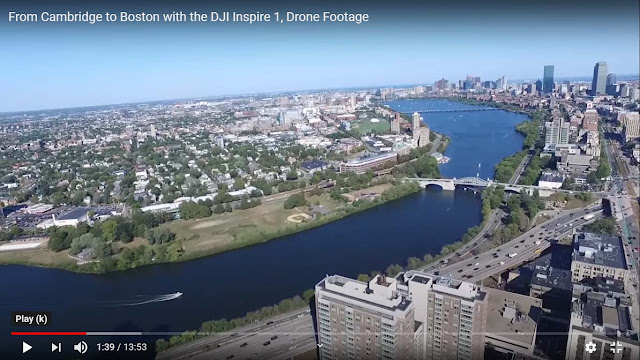 Here also is my suggestion for a responsible alternative to Harvard’s private commuter rail stop.  The stop is being sold as a silly “neighborhood improvement.”  I propose that rather than spending all this money for silly empire building, the new area being laid out in what is now an abandoned rail yard and highway exit ramps, be connected by a new Green Line A spur with stops connecting this new Harvard campus and the adjacent residential North Allston neighborhood to Harvard Square and to Back Bay.  The Back Bay connection would be by way of connecting to the existing Green Line B branch at the BU Bridge / Commonwealth Avenue intersection (upper right in the other attachment).  Harvard Station on the Red Line was built retaining a preexisting tunnel which could be used for access, with limited appropriate adjustments in the facility. 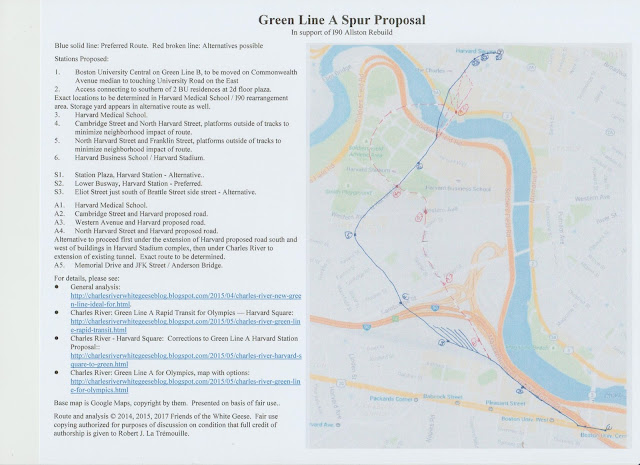 Negligible additional moneys should be spent as part of this project.  Room should simply be left for the Green Line A spur and it be built when funds become available and the new Harvard campus is further along.  Additional reduction in the existing overload in downtown Boston and Cambridge facilities would be obvious.  Plus it would provide transportation to connect the relocated Harvard Medical School and related facilities to the Longwood / Harvard Medical area and the Orange Line by the Inner Belt subway in planning which would include or terminate with transfers at Kenmore Station on the Green Line and Landsdowne Station on the Commuter Rail.  The latter connection, or the new commuter rail station at Boston Landing  makes a lot more sense than the private Harvard stop.  Boston Landing is so close that busing is obvious.
This post was initially published January 22, 2021.  It was amended January 25, 2021 by adding my suggestions for an alternative to Harvard’s private commuter rail station.
Congratulations, once again, to Secretary Pollack on her promotion.  She has done well.  During her tenure, MassDOT has been the adult in the room on the Charles River.  MassDOT is not perfect, but it has frequently stood up to the Cambridge City Council and the state’s Department of Conservation and Recreation on outrages they have fought for.
Posted by Friends of the White Geese at 1:07 PM